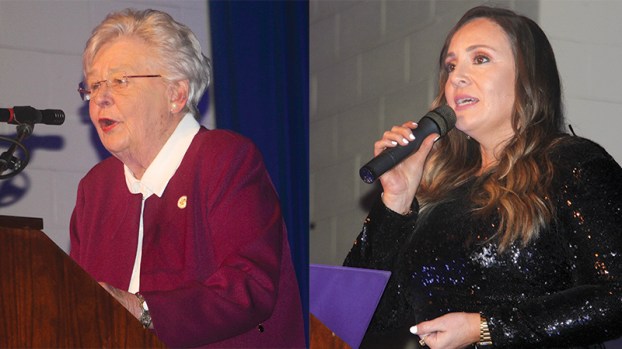 LEFT: Governor Kay Ivey touts state achievements and the role communities like Andalusia play in the state’s economic success during her opening remarks. RIGHT: Valerie Cunningham of Make-A-Wish Alabama speaks about the role growing up in Andalusia played in her life and her current role helping make children’s dreams come true as part of Make-A-Wish. (PHOTOS BY ROBERT BLANKENSHIP) 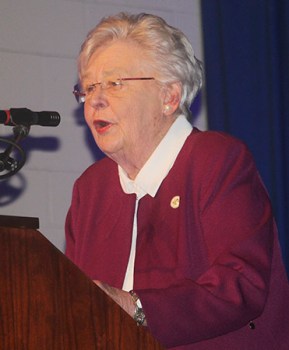 Governor Kay Ivey touts state achievements and the role communities like Andalusia play in the state’s economic success during her opening remarks. 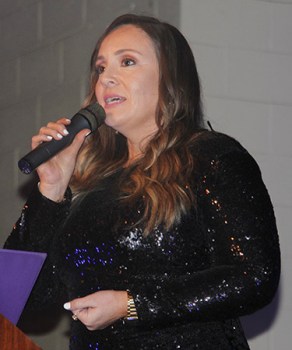 Valerie Cunningham of Make-A-Wish Alabama speaks about the role growing up in Andalusia played in her life and her current role helping make children’s dreams come true as part of Make-A-Wish. 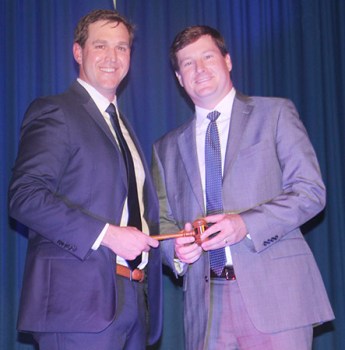 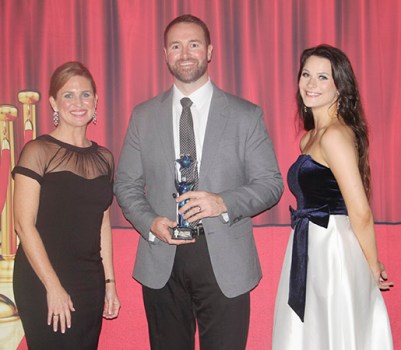 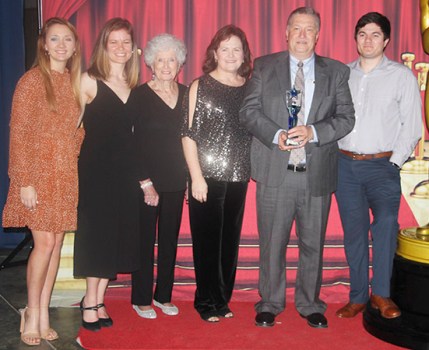 Representatives of Covington Casket Company celebrate being named the Mid-Sized Business of the Year. 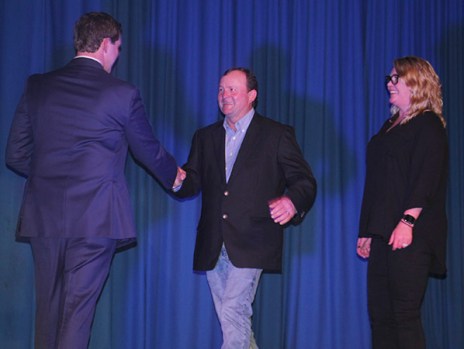 Splash Hopper is presented the award for Small Business of the Year. 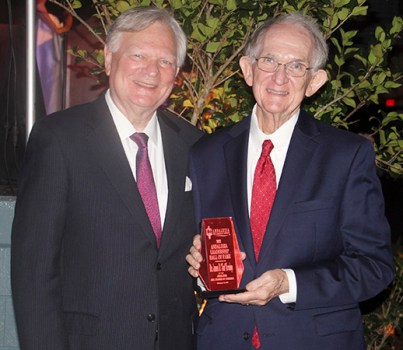 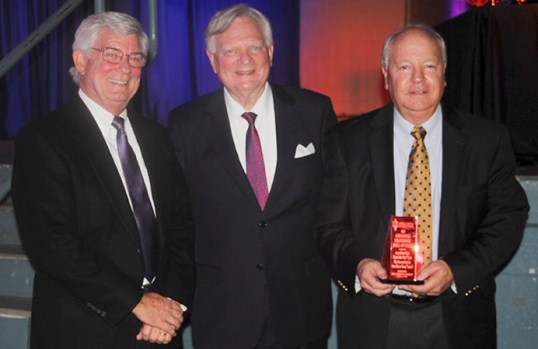 Mayor Earl Johnson presents the Leadership Award to Riley Taylor Jr., left, and John Taylor, right. The Taylors were representing the family whose business ties in Andalusia date back to 1908 with Taylor Parts and Supplies and later TPS. 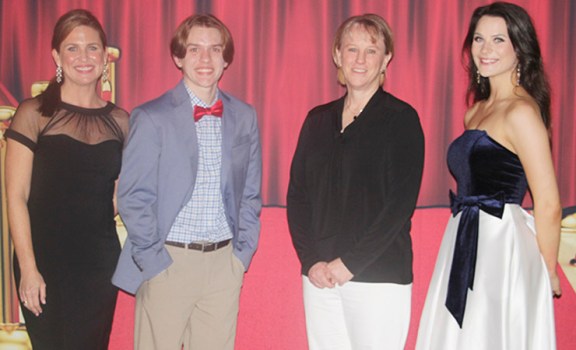 Chamber Director Laura Wells, left, and Director of Membership Services Maggie Holmes, right, with this year’s Student of the Year, Cooper Taylor, and Teacher of the Year, Leigh Newby. 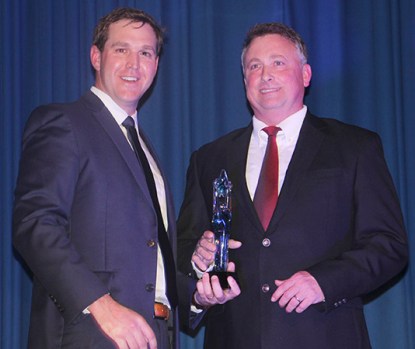 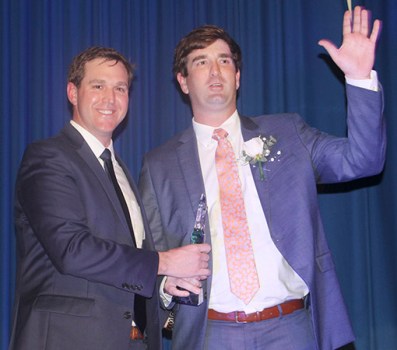 Mark Chambers, left, presents the Citizen of the Year Award to Chris Cotton, who accepted the award on behalf of his father, Alan Cotton. 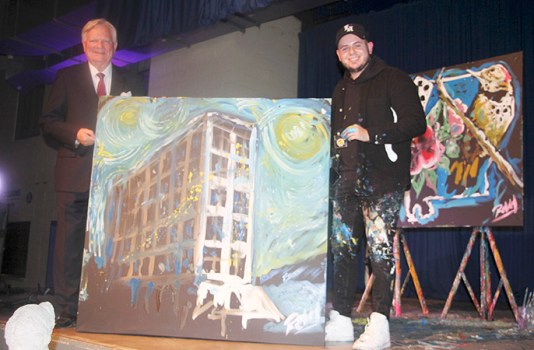 Mayor Earl Johnson with speed-painting artist Revel. Revel’s creation of the Timmerman Building was auctioned at the end of the program with the proceeds going to Make-A-Wish Alabama. Johnson won the auction with a bid of $4,100 and he said he hopes to hang the painting in the future hotel planned for the building.

The Andalusia Area Chamber of Commerce celebrated local businesses and a successful 2021 during its annual banquet Thursday night that was filled with awards presentations and entertainment.

The evening’s event began with the late addition of an appearance by Governor Kay Ivey.

“I just know that between the chamber of commerce and the mayor things are going to be happening here in Andalusia,” Ivey said. “When places like Andalusia and Covington County have success our entire state wins. Here in Alabama we are doing things the right way. We are working hard, living by our values, making sure our students are focused on the curriculum … in the classroom. The rest of the nation can take notice because Alabama is coming back stronger than ever.”

Along with the presentation of awards, the night also marks a change in leadership for the chamber’s board of directors as new members were introduced and Mark Chambers passed the gavel as the board’s 2021 president to William Alverson.

Among the changes at this year’s banquet was the addition of new Executive Director Laura Wells.

“I have started this new year off with fresh eyes and big dreams and we have exciting events planned for 2022. I am excited to see the progression of our community with the continuation of our downtown revitalization. I wholeheartedly believe that Andalusia is the absolute best place to live and we have so many successes to be proud of,” Wells said.

The initial awards of the evening were the Andalusia Leadership Awards, presented by Mayor Earl Johnson. The first of two awards was presented to Dr. Jim Krudop, recognizing his work in education and in civic affairs. The two men were high school classmates, and Dr. Krudop is also a former member of the city council.

“Dr. Krudop has spent a lifetime giving back to the greater Andalusia community, both as an educator and through his civic commitment,” Johnson said. “From 1978 until his retirement in 2018, his name was synonymous with Lurleen B. Wallace Community College, where he served as vice-president, interim president, dean of students and dean of administration. He and his wife, Holly, and their family have been an important part of the Andalusia community and we are pleased to honor him tonight.”

In receiving the award, Krudop said he is thankful for the opportunity to serve the community.

“I am blessed to have lived and to have served in this community nearly all my life. This is an honor,” he said.

The second award was presented to the Taylor family who for many years operated Taylor Parts and Supply Company and TPS, which played vital roles in the Andalusia community for many years.

“We are pleased to honor a family whose work had a tremendous impact on the Andalusia business community. James Marion Taylor founded J.M. Taylor Auto Company in 1908. His sons joined him in the business and took control of the company in 1920 and incorporated it into Taylor Parts and Supply Company in 1937,” Johnson said.

New generations of the Taylor family would join the business over the following decades and in 1968, TPS, Inc. was formed.

“The company continued to grow and prosper until it was sold in 1992. Through the years, Taylor Parts and TPS provided many local jobs, paid their civic dues, and positively influenced the local business community,” Johnson said.

“It is a real honor to represent our family. We have a vested interest in this community. We are thankful to raise our family here and the schools we have. It’s just a great place to raise a family and we’re glad to be a part of it,” said Riley Taylor Jr.

“Mrs. Newby is a caring teacher who expects the best from all her students,” Holmes said. “She is demanding by balances it well with her concern for every student in a way that makes each of them feel important. Her ability to make connections with students is top notch.”

The award, which includes a $1,000 scholarship, was presented to Cooper Taylor of Andalusia High School. He is the son of Lance and Monica Taylor.

“One of Cooper’s teachers stated that she truly believes he is the hardest working student in the school. He is successful academically and socially. He demonstrates incredible leadership and initiative and takes great pride in all his work,” Holmes said.

Moving into the awards presented to local businesses, Wells presented the Small Business of the Year Award to Splash Hopper.

“Splash Hopper has been instrumental in giving to our community by donating to both the state-winning baseball and softball teams. They partnered with Straughn High School volleyball in supporting their fundraiser, ‘Detailing for Tips’ and offer us free scares, screams and candy every Halloween with their Haunted Tunnel event,” Wells said.

The Mid-Sized Business of the Year Award was presented to Covington Casket Company.

“Covington Casket is one of the county’s oldest businesses. They have recently added additional manufacturing equipment and expanded their operation to a beautifully-renovated city spec building at the industrial park. They have donated to Andalusia Elementary School to assist teachers with supplies and gave much-needed food and supplies to the Andalusia Animal Shelter and, for the past 20 years, to Operation Christmas Child,” Wells said.

LBW Community College was this year’s recipient of the Large Business of the Year Award.

“(LBW) is a major contributor to economic change in Southeast Alabama through career pathways and innovation in education. With over 1,700 students, 214 employees and over $11 million in total wages and benefits, LBWCC is leading the way in their industry,” Wells said.

The Business of the Year Community Service Award was presented to Piggly Wiggly.

“Piggly Wiggly Andalusia strongly believes in investing in our youth and has made donations to all of our schools. From something as small as donating bags to making monetary donations to fall sports. When hiring youth, they strive to help them build a good foundation to grow and move on to bigger and better things.

“Piggly Wiggly created the Feed Jim’s Furry Friends program in the memory of their beloved store manager, Jim Mills. With the help of customers, they raised $645 to purchase food for the Andalusia Animal Shelter.

“The Holiday Hope Bag program raises money to buy food that is donated to our local Christian Mission. With the help of customers, they raised $4,300 over the last three years.”

The Distinguished Citizen Award for 2021 was presented to Alan Cotton of Cotton’s Florist and Alan Cotton Company.

“After experiencing the devastating loss of his wife and business partner due to the COVID pandemic, Alan used his personal experience to be an advocate to encourage residents to become vaccinated. His publicity efforts resulted in a significant increase in our county’s vaccination rate. An unselfish act, his efforts was a lovely tribute to the memory of his wife in the face of pain and grief. Because of his efforts, Andalusia is a better place,” Wells said.

“Most of the year, Mrs. Rose, as she is known by everyone, is the fun TABS teacher at Andalusia Elementary School and the Andalusia Junior High girls’ basketball coach. But, in the summer it’s all about the Coleman-Robertson Center summer program. Mrs. Rose has established a legacy of caring for the children of this community and for her dedication we offer this designation as a token of our sincere gratitude,” Chambers said.

The guest speaker for the event was Andalusia native and Straughn High School graduate Valerie Cunningham who serves as the Vice President of Advancement for Make-A-Wish Alabama.

“Andalusia has been home to me for as long as I can remember. I’ve lived other places for the past 20 years, but this has always been home.

In her efforts with Make-A-Wish, the organization has seen unprecedented growth. Cunningham launched the Trailblaze Challenge — an endurance and fundraising program — that over five years has raised over $2.5 million and was recognized as the top-grossing program in the nation last year. She said her goal is to see the program surpass the $1 million mark for a single event in 2022.

The evening concluded with a performance by Revel, a live speed painter who created two Andalusia-themed paintings in the matter of minutes … and created them upside down. His first creation was a painting of the Timmerman Building, which was auctioned off by local auctioneer Jason Sasser, with the proceeds to be donated to Make-A-Wish. Mayor Johnson came out with the high bid of $4,100 and he said he intends to hang it in Timmerman Building, where plans are to revitalize into a hotel.