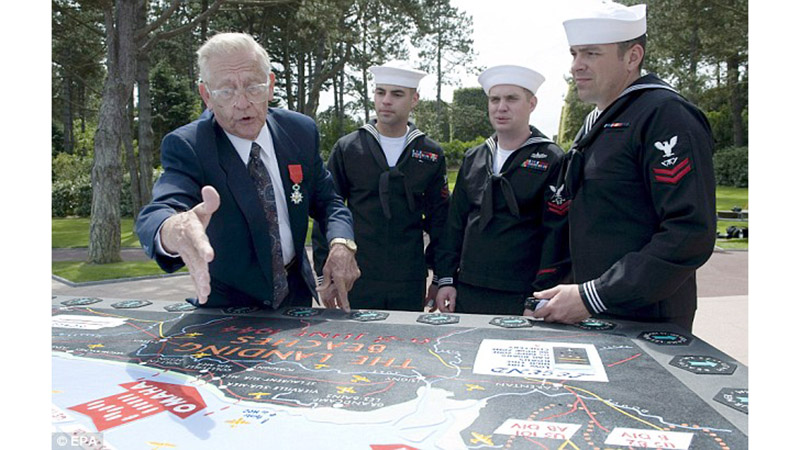 “Living legend” is a description, often overused, to describe someone who has made an impact upon our country. In the case of WW II veteran, Clyde O. Combs, that description hardly seems adequate.

The year was 2009, and 86-year-old Clyde Combs walked quietly, alone with his thoughts, along the beaches of Normandy. His mind wandered back to that day, 65 years before, when he was part of the largest amphibious invasion force ever assembled. He had traveled back to Normandy as part of the international recognition of the 65th anniversary of D-Day. He would be honored that day, but the honors he received, he accepted on behalf of his crewmates and thousands of his brothers who could not be there that day. Clyde Combs made that trip back to Normandy on the 50th, 65th and 70th anniversaries of D-Day.

On June 6, 2009, leaders of the United States, Canada, Britain and France met in Paris, France, to commemorate the 65th anniversary of D-Day. President Nicholas Sarkozy of France presented the Legion of Honor to the allied veterans in attendance prior to the main ceremony that took place at Normandy. Clyde Combs was among those American veterans that were honored. The award, which was created by Napoleon Bonaparte in 1802, caused Combs to tear up, “I am so humbled…The real heroes are the thousands of service members killed on D-Day.”

After a train ride, the main ceremony took place on the bluffs above the beaches at Normandy.

It was during this ceremony that Clyde Combs and other veterans were recognized by President Barack Obama. Combs received a salute from the President and spoke briefly about the D-Day experience [see photos]. For Combs, it was all just part of what he sees as his life’s mission: preserving D-Day’s place in history. 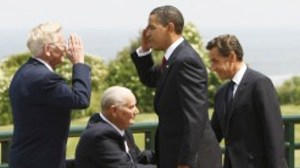 Clyde Combs was born September 15, 1924, in Louisville, Kentucky, [he says, “below the Mason-Dixon line”]. His parents were Bertha Alice Newton and Clyde Otto Combs. They had three older daughters, Doris, Helen and Marjorie.

Clyde Combs grew up in Indianapolis, Indiana, and graduated from Arsenal Technical School in June, 1942. Besides the usual high school courses, Clyde had four years of training in machine drafting and drawing. Those drafting skills earned him a good-paying job [$.50/hr.] at a defense plant that manufactured structural aluminum shapes [channels, angles, Z-sections etc.]. The moldings were shipped to aircraft manufacturing plants to be used in constructing U.S. Army Air Corps fighters and bombers.

Clyde received his draft notice in early 1943 but was allowed to join the Navy. He left for boot camp on March 11, 1943. During boot camp at the Great Lakes Naval Training Center, Clyde was selected for further training at the Quartermaster School. Upon graduating, Clyde tried to sign up for submarine duty [the pay was 20 % more for hazardous duty]. When more men volunteered than needed, Clyde was asked to “volunteer” for PT boats. He was accepted even though he had no idea what a PT boat was. At the age of 18 [the billet called for 20-year-olds], Clyde soon found himself on a train to Rhode Island.

The Motor Torpedo Boat Boats Squadrons Training Center was located on Narragansett Bay in Melville, Rhode Island. Clyde soon learned about PT boats and all the associated skills needed to operate them. The men on a PT boat were taught each other’s jobs in case of injury or death of a crewmate. As a Quartermaster, Clyde had to learn additional communication skills such as semaphore and signal flags, blinker lights [using Morse code] and radio communications. At 97 years of age, he says, “I can still send Morse code and semaphore flag signals, neither of which is useful in Houston, Texas!”

Training in Melville was completed in December, 1943, and Motor Torpedo Boat Squadron 35 [Ron 35] was formed. After an interim stop at the Brooklyn Navy Yard awaiting delivery of their boats, they traveled to Bayonne, New Jersey, where the boats were commissioned on February 15, 1944. The new boats were called “ELCO” boats, after the name of their manufacturer, The Electric Boat Company. The 80-foot-long PT boats were powered by three [3] 1550 HP Packard Marine engines that used 100 octane gasoline.

Clyde Combs, Max Foreman of Andalusia, Alabama, and 10 other sailors were assigned to PT 515. They and the rest of Ron 35 took their new boats to Miami, Florida, for a shake-down cruise and arrived in April, 1944 [note the photo taken at the time]. Their squadron had been scheduled for deployment to the Pacific theater after shake-down. With the coming invasion at Normandy [Operation Overlord], Ron 35 was ordered to Europe. When they left Miami, they proceeded up the east coast to the Brooklyn Navy Yard to await their trip overseas. 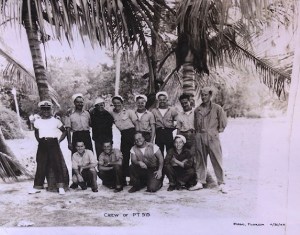 Combs recalled tying up to the dock in New York, right next to the newly launched battleship, USS Missouri [BB-63]. Their 80-foot-long PT boat was dwarfed by the large battleship, on which the Japanese surrender would take place in August 1945. While waiting to leave, Clyde and his friends enjoyed a few of New York City’s sights including Times Square and the “Rockettes.” Clyde’s sister, Marjorie, traveled to New York and they had breakfast together just before he left.

PT 515 and three other boats were loaded aboard the SS Santiago, a T-2 tanker on May 21, 1944, for the trip to England. After 10 days, they arrived and made their way to their base at Portland Bill, just south of Weymouth on the English Channel. When the rest of Ron 35 had arrived, they made preparations for the D-Day.

The naval component of D-Day [Operation Overload] was called Operation Neptune. Clyde Combs and PT 515 would be part of the largest naval amphibious invasion in history. The memory of those the pre-dawn hours of June 6, 1944, were recalled by Clyde, “I could hear the steady drone of aircraft overhead. As it became brighter, I could see the sky filled with transport planes, many of them towing gliders.” 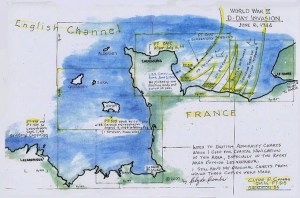 Pictured with this article is a photo of Clyde Combs’ hand-drawn map of the D-Day operation. The map is accurate, based upon the British Admiralty charts used by Combs and is beautifully drawn. The invasion beaches are shown in the upper right. PT boat Squadron 2 was assigned to escort the 100 or so minesweepers whose job was to clear a path for the invasion fleet, all the way from the shores of England to the Normandy beaches. Just to the left of the invasion forces, Clyde has drawn in the positions of 36 PT boats that were set up in a line of protection, called the Mason line. PT 515 took its position on the line and Clyde recalled, “In taking our [PT 515] position on the line, the gunners on our boat alone blasted 17 floating mines in the first hour we were there.”

With the exception of a few special missions, PT 515 and the others on the Mason line remained in place for the first 11 days of the invasion. Clyde recalled, “We bathed over the side in the cold channel with salt water soap, no mail deliveries…Our food was K-rations, powdered eggs etc.” On a few occasions, they were sent on special missions.

On one such mission, they picked up the floating body of a sailor who had died when the destroyer USS Corry [DD-463] hit a mine. PT 515 brought the body aboard and after retrieving the dog tags, held an official burial at sea. The skipper, Ltjg. George Sullivan, asked Clyde’s friend, Max Foreman [from Andalusia, Alabama] to perform the burial ceremony. Clyde thought it ironic that Foreman was picked since his father owned Foreman Funeral Home back in Alabama.

On another occasion, PT 515 was sent to transfer several Navy officers to the cruiser, USS Augusta [CA-31]. Clyde and several shipmates went aboard to assist. Clyde recalled, “We managed to find our way to the food storage locker…I managed to get seven [7] frozen chickens inside my underway jacket without freezing before we got back to the boat…My shipmates managed to ’requisition’ cans of fruit cocktail, pork and beans etc….They ate good on those big ships!” The Augusta was the same ship on which President Roosevelt and Prime Minister Churchill had signed the “Atlantic Charter” in August 1941.

As soon as the allied armies had established their objectives inland, Cherbourg became the new base for PT515. Clyde Combs was responsible for navigating the boat into tight areas using British Admiralty charts [which he still has]. One trip to the town of Lezardrieux took them west of Cherbourg into a narrow channel that led up the Pontrieus River. They weren’t sure the Germans had gone, but they made it to the town and anchored. They were the first Americans sailors to visit so they were warmly welcomed. After bartering Spam and cigarettes for fresh eggs and wine, they headed back to base. On the return trip at night, PT 515 was fired upon by a German battery from the Channel Islands [which were occupied by the Germans throughout the war].

On another occasion, PT 515 was operating at night outside Le Havre when they picked up a target. After firing two torpedoes, they were fired upon by German E-boats. The Packard engines threw up a 15-foot rooster tail which was picked up by the German searchlights. Combs recalled, “The skipper told me to go to the stern to tell our Torpedoman, ‘Red’ McCloskey to turn on the smoke generator…I headed back to the cockpit after passing along the skipper’s order…After seeing the green tracers of the German shells passing overhead, I decided to hit the deck…the seas were very rough and we didn’t have handrails to protect us from falling overboard…I hit the deck directly over our fuel tanks below deck that were carrying about 3,000 gallons of 100 octane gasoline…I couldn’t have picked a worse place.”

Author’s note: The February 26, 2022 article detailing Max Foreman’s service aboard PT 515 was only possible because of Clyde Combs’ wartime diary. Mr. Combs story is remarkable, not just for his military service, but also for his tireless efforts to honor the men lost on D-Day. He has been featured in many newspaper articles and has appeared on television in Houston numerous times. More will be written about this remarkable veteran in Part 2.