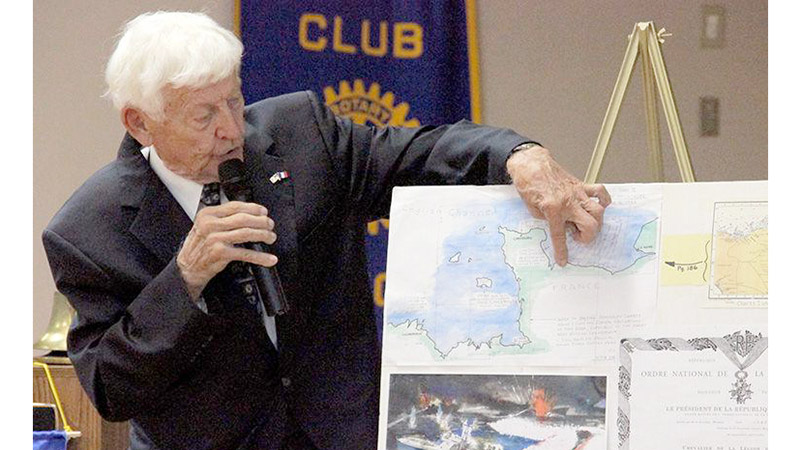 Clyde Combs making one of his many D-Day presentations to civic clubs. This was the Rotary Club in Baytown, Texas, 2016. He is using his hand-drawn map. [Photo: The Baytown Sun, Lane Donath]

The author’s first contact with Clyde Combs came in January 2021, after a friend, Norman Hobson, received a letter addressed, “To Max Maloy Foreman, or his heirs.” It was sent, “in care of Foreman Funeral Home.” The letter began, “It’s been about 76 years since we served our great country together on PT 515. After all those years, I still have memories of those times – some good, some not so good.” Combs continued with an update on his life and said, “I’ve been richly blessed. I’m enclosing this classic map that I composed in 2007, which shows graphically, the important role we played in the Normandy invasion in June 1944. I am very proud of our service and still give talks to various groups [schools, churches, Boy Scouts, Rotary Clubs etc.]…. Combs concluded, “I’m so thankful God was on our side.”

Thanks to Clyde Combs’ reaching out to a friend from a war fought so many years ago, we were able to tell the story of Norman Hobson’s uncle, Max Maloy Foreman [Max Foreman died in 2005]. As a result of conversations with Clyde Combs over the past year, the author felt compelled to share some of his story. This article is the conclusion of that effort, which began last week.

At the end of Part 1, Pt 515 was running away from an attack by German E-boats when it was struck in the bow by a large shell. Fortunately, the shell struck above the waterline and passed completely through the ¾ inch laminated mahogany sides of the PT boat without detonating. PT 515 was forced to return to their base in Portland, England, for repairs. The damaged bow of the boat sat safely high out of the water once the boat was up to speed. Speaking about the attack, Combs said, “We made it and nobody on our boat was injured. The only casualty was Richard Dignan’s dress blue uniform, which was hanging in the forepeak closet where the shell went through.”

On another occasion, PT 515 was ordered to proceed to the town of Lezardrieuz on the north coast of France. The trip began on the morning of September 1, 1944 and was intended to find out if the German shore batteries had been evacuated [PT boats could be used as guinea pigs]. Combs was able to navigate the boat through the rocky, narrow channel leading to the town. Luck was with the boat as the Germans had recently departed, leaving a happy group of townspeople who warmly welcomed them. Combs recalled, “We were the first American sailors they had ever seen…We bartered cigarettes and Spam for fresh eggs and wine…Some of the women in the group I saw on the dock had had their heads shaved, their punishment for consorting with the German troops during occupation.”

On their return trip at night, the boat’s skipper chose to take a shortcut which put them in range of German batteries on the Channel Islands. The four islands, Jersey, Guernsey, Alderney and Sark, were held by the Germans throughout the war. Traveling at high speed generated a lot of noise and they were soon heard by the Germans. The boat’s large 15-foot rooster tail was picked up by searchlights and the Germans began shelling them. Fortunately, their high speed kept them safely ahead of the Germans shells and they made it back to Cherbourg by morning.

During the time from the initial troop landings until the latter part of 1944, the PT boats continued their offensive patrols. They relieved each other in the action areas and alternated between operations from the French coast back to their base in Portland, England. When back at their base doing maintenance and loading supplies, the crews had time for liberty. Combs recalled, “We took a train to London on a 72-hour pass during the time when the V-1 rockets [buzz-bombs] were flying in from their launch pads in France. There was tremendous damage and fires but fortunately none hit while we were there…We just missed seeing Glenn Miller and his orchestra at the dance hall we went to. He had been there the night before and it turned out to be his last performance ever. He was killed a few days later when his plane crashed in the English Channel.” 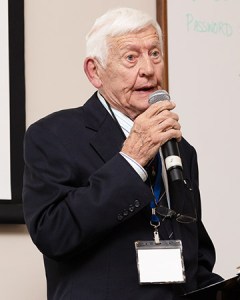 In late 1944, it was decided that PT boat operations in the English Channel were no longer needed. The Navy was directed to transfer the boats to Russia under the Lend-Lease Plan. On November 30, 1944, PT 515 and others departed Portland for Scotland where the transfer was to take place. The trip to Scotland was memorable to Combs for all the wrong reasons. After stopping at Falmouth, England for re-fueling, they headed northward, around Land’s End, to Millford Haven, Wales, for another re-fueling. They laid over there until December 11 because of bad weather.

Combs recalled the trip, “That was the roughest trip of my life. Besides being icy cold at a latitude equivalent to being 1,000 miles north of New York City, the waves were cresting at 15-20 feet high…far too much for an 80-foot PT boat. We rolled in swells to an angle of 45 degrees, almost capsizing, causing us to split 22 wooden ribs in the hull…Only one person could stay topside at the wheel for a maximum of 20 minutes, wearing heavy weather gear, including face mask. I have never forgotten my times at the wheel [thank God for ‘medicinal brandy’].

The transfer of the boats to the Russians took place at Roseneath, Scotland on February 20, 1945. The boat crews moved to Quonset huts on the base while the Russians took possession of the boats. Combs recalled the experience, “The Russians were suspicious and secretive about everything. As soon as we left the boats, the Russians posted 24-hour guards on each boat and nobody could come near….They wouldn’t accept our 36 boats until we installed three brand-new Packard Marine 1550 HP, V-12 engines in each boat…An inventory list of all items on each boat was given to the Russians. Our boat’s list included a ‘pickle dish’ for the galley and ours was missing. The Russians assumed it was some sort of secret weapon and insisted that we furnish one. Our skipper found one at the base and gave it to them, complete with pickles.”

On March 11, 1945, all PT boat Squadron 35 personnel departed Liverpool, England, for Norfolk, Virginia, aboard the USS Wakefield [APA-21]. Clyde spent the remainder of his time in the Navy at Melville, Rhode Island. He was discharged on November 6, 1946.

Clyde married Beth Peevy in 1945 and they moved to Indianapolis, Indiana, after his discharge. They had one daughter, Cheryl Combs [Scarborough]. Clyde worked for the Allison division of General Motors in Speedway City, Indiana, drawing sectional views of Boeing jet engines. After a time, Clyde entered the co-op program at the General Motors Institute in Flint, Michigan. He studied there for two years. Clyde and Beth separated in 1949 and soon divorced. By then, Clyde had relocated to Houston, Texas.

Clyde landed his first engineering job in downtown Houston. He met Leta Shine in an employment agency and they married in 1950. They would have three children, Clyde Alan Combs, Sandra Combs Allen and Linda Del Castillo. Clyde and Leta were married for 58 years until her death in 2008.

For the next 16 years, Clyde work for several engineering companies before forming McEver Engineering Company with three other partners in 1966. One of Clyde’s most interesting projects was done while working at McEver. At the request of an oil refinery in Bolivia, Clyde was asked to draw up a design for an addition to their current plant. The designed addition had to be transported in 10’ X 10’ X 40’ containers through the Panama Canal to Chili, then hauled by railroad, through mountains and a tunnel to their plant site in Cochabamba, Bolivia. Clyde’s design was accepted and the refinery addition successfully built. 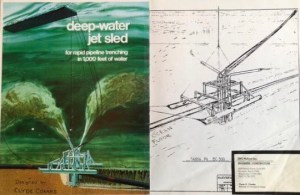 Combs’ “Deep-water jet-sled” design used during his presentation at the 25th Offshore
Symposium of the Society of Naval Architects and Engineers, Feb. 2020. [Photo: Clyde Combs]

Offshore oil pipeline construction was a field where Clyde Combs made an impact. Clyde was actually involved in constructing a pipeline to bring liquid sulfur onshore just like the oil pipelines. Underwater pipe-bury jet-sleds were used to construct 30-inch pipelines from wells in the Gulf of Mexico to the refineries onshore. A barge fed compressed air to the sled which opened a trench for the pipe which was laid by pipe-laying machinery also on the barge. Currents in the water caused the trench to be back-filled. Clyde’s knowledge of this procedure would play a major role in a more complex pipeline in the North Sea in 1972. McEver was bought out by Science Management Company in 1977. From that time on, Clyde did contract work for several companies in the oil and petrochemical field.

In 1969, Phillips Petroleum discovered the first producing oil well in the Ekofisk Oil Field, located in the North Sea, off the coast of Norway. In 1972, the Norwegian government contacted Brown & Root Engineering in search of someone to build a pipe-bury sled using high pressure water. Brown & Root contacted Clyde Combs who had done previous design work for them. The overall contractor for the pipeline project was Santa Fe International. They sent one of their engineers, Bill Cook, to meet with Clyde. Together, Cook and Combs designed the pipe-laying vessel and the surface barge. The revolutionary new design of the jet-sled was based on a similar one used in the Gulf of Mexico. However, the new jet-sled used high-pressure water instead of compressed air because of the extreme depths of 1,000 feet and more.

Clyde Combs provided the drawings for the pipe-laying vessel and the jet-sled. Texas A & M University built and tested the first deep-water jet-sled, using Clyde Combs’ drawings. They sent their model along with Combs’ drawings to Stavanger, Norway, to be fabricated. Clyde named the sled the BC-500 after Bill Cook and the 500 feet minimum depth. In 1973, Santa Fe International Corporation used the BC-500 and surface barge to lay the oil pipeline from the Eckofisk Oil Field to the refinery at Edinburgh, Scotland.

For many years, the design work for the North Sea pipeline had been lost to the public. However, in February 2020, Clyde Combs was invited to speak to the Society of Naval Architects and Marine Engineers [SNAME] at their 25th Offshore Symposium in Houston, Texas. Combs presented a full Power-Point presentation about his design and the story of its development. His contribution to deep-water pipelaying was documented and enthusiastically accepted. His presentation was published in One-Petro, an online publication for the offshore oil industry.

In closing, the author would like to pay tribute to Clyde Combs, not just a member of The Greatest Generation but a man of deep Christian faith. He was first baptized at age 13 at the Broadway Baptist Church in Indianapolis, Indiana, and has lived a life of fidelity to that faith. Texas and our nation can be proud. Clyde currently lives in Houston, Texas, and enjoys his 11 grandchildren and 19 great-grandchildren, who are spread-out from coast to coast.

The author thanks Mr. Clyde Combs and his daughter, Mrs. Sandra Combs Allen for their help in telling Mr. Combs’ story. It was a very special honor.