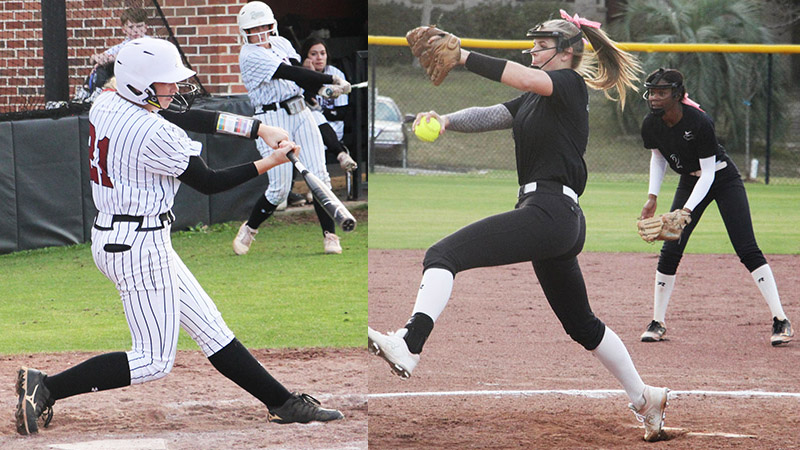 LEFT: Andalusia’s Taya Newton sends a pitch into the outfield. RIGHT: Reese Cauley sends a pitch to the plate on her way to a complete-game win for Opp. (PHOTOS BY ROBERT BLANKENSHIP)

Opp jumped to an early lead and stayed there to notch a victory over Andalusia Monday, 9-2.

Each team brought a runner home in the first inning before Opp took control with four runs in the second to go up 5-1.

The Lady Bulldogs cut into the lead with a run in the third, but it would prove to be their last score of the game. Opp added three more runs on a home run by Caroline Courson in the sixth.

Reese Cauley was the winning pitcher for the Lady Bobcats, pitching a complete game. She gave up only three hits while striking out 10 batters and did not give up an earned run.

Olivia Cravey got the start in the pitcher’s circle for Andalusia and gave up six earned runs in 3 1/3 innings while striking out two Opp batters. Maggie Furr came in as the reliever and surrendered three runs on four hits and struck out five batters.

Leading the Lady Bobcats at the plate was Cauley who went 3 for 3 with a single and two doubles. She scored a run and drove in four. Amaya Womack went 2 for 4 with a double and scored three runs. Courson added the 3-run homer while Madi Wilson hit two singles.

The win gives Opp a record of 11-5 on the season and they will host area opponent New Brockton on Thursday, March 17. The JV team will begin play at 4:30 p.m.

Andalusia’s record stands at 9-9 and they will travel to Brantley on Thursday, March 17 with JV to begin play at 4:30 p.m.