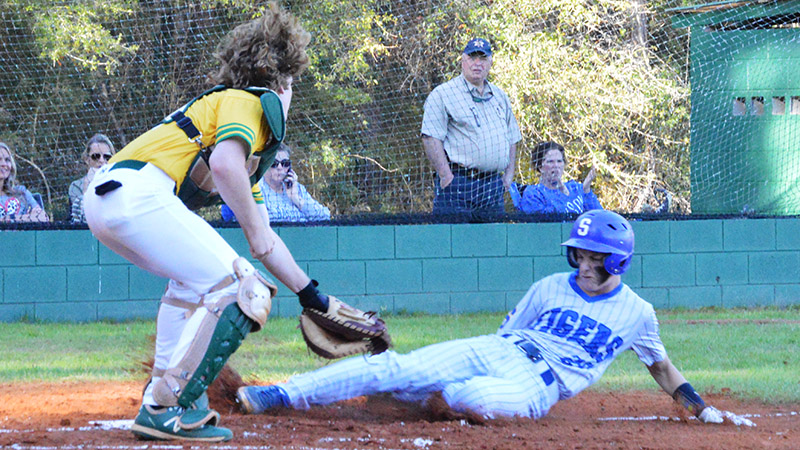 Florala’s Judd Goolsby tags out Samson’s Coe Kelly on a close play at the plate. (PHOTO BY ZACK MAIO)

Samson scored in every inning and collected 15 hits for a baseball area win at Florala, 12-0, Thursday. 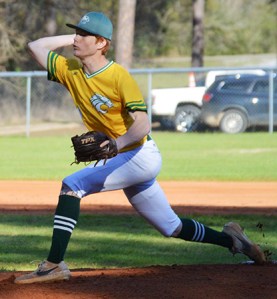 Colby Strickland started the game on the mound for the Wildcats and went three innings.

“Hats off to Samson and the Brooks kid who pitched a great game. They also swing the bat really well. I thought our guys played well n the field and Colby and Judd threw strikes, which is all you can ask. We are struggling with some arm soreness right now, and it’s putting us behind in our pitching rotation. Hopefully, we can get it back going to finish the season strong,” Head Coach Tyler Zessin said. 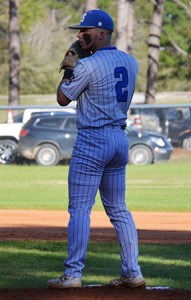 Braxton Brooks led the Tigers with a five-hit day at the plate and also picked up the win with a complete-game three-hitter.

Braxton Brooks led off the game with a single through the left side and moved to third on a sacrifice bunt by Jacob Branch. Joshua Lowery gave the Tigers (2-3, 1-0 1A Area 2) an early 1-0 lead with an RBI groundout. Judd Goolsby singled with one out in the bottom of the first, but Brooks held the Wildcats (7-6, 0-3) in check and stranded Goolsby in scoring position.

Brodey Mixon opened the second with an infield single before a pitch hit Coe Kelly. Luke Reid drove home Mixon with an RBI single, and Kelly was tagged out at the plate. SHS loaded the bases with one out as Brooks pushed the lead to 3-0 with a single and scored Reid. The inning came to a screeching halt when Branch lined into a double play. FHS put two runners aboard in its half on a walk and hit batsman but was held off the scoreboard. 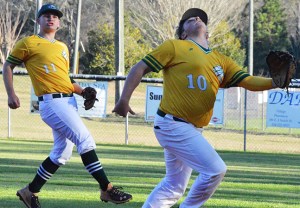 Samson scored single runs in the third, fourth, and fifth innings to widen its lead to 6-0. Preston Truman and Goolsby walked in the bottom of the fifth for Florala. A wild pitch moved both runners into scoring position as Kennith Dalton Jackson hit a rocket to right that Merritt Wyrosdick caught and preserved the shutout.

Konner Owens took a leadoff walk in the top of the sixth and scored on an RBI triple by Brooks. A wild pitch brought Brooks home and made the score 8-0. The Tigers loaded the bases with two outs, but Goolsby retired Kelly on a groundout and ended the inning. Seth Bundy and Strickland reached on consecutive one-out errors, but the Wildcats were unable to break through. 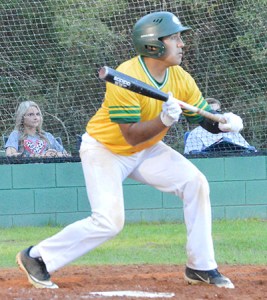 Johan Zamora prepares to lay down a bunt for Florala.

SHS put the game out of reach with a four-run, five-hit seventh inning. Goolsby reached on a two-out miscue to keep the game alive for FHS in the bottom half. Jackson followed with a single up the middle, but the game ended on a pop-up from John Howell. 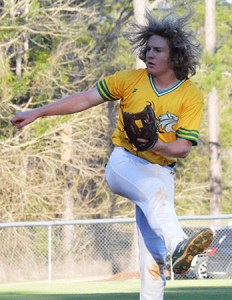 Judd Goolsby let his hair fly during a pitch to the plate.

Brooks went 5-for-5 with three RBIs and scored four runs to lead Samson at the plate. Brooks also twirled a complete-game three-hitter and struck out eight for the win. Goolsby went 2-for-3 to pace Florala, and Jackson finished 1-for-4. Strickland allowed four runs (two earned) on four hits and struck out one in three innings, while Goolsby finished the last four innings in relief.