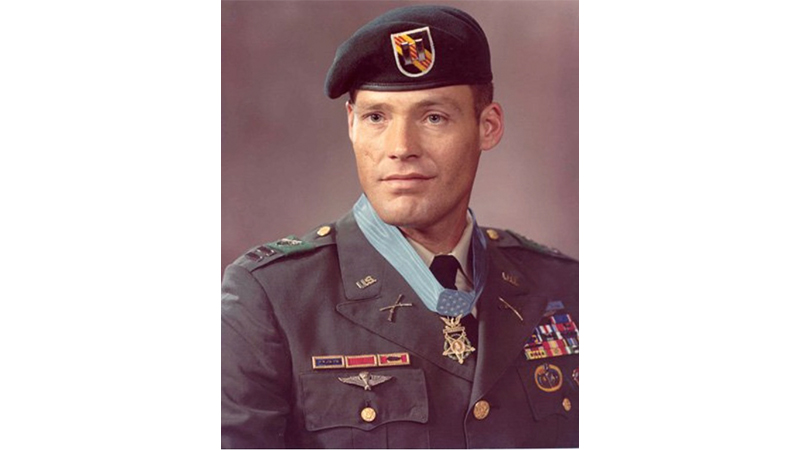 It is difficult to reduce to human qualities, the exploits, courage and valor of the most decorated American soldier to serve in the Vietnam War and possibly in any war. Opelika, Alabama, native Colonel Robert L. Howard was wounded more than 14 times while serving 54 months in combat during five tours in Vietnam. He was nominated for the Medal of Honor three times, but was given lesser awards for the first two nominations because his actions took place during covert operations in Laos and Cambodia. By the time he retired after 36 years of service in 1992, Howard had been awarded more than 30 medals, including eight Purple Hearts, the Medal of Honor. the Distinguished Service Cross and the Silver Star.

Robert Lewis [Bob] Howard was born July 11, 1939 in Opelika, Lee County, Alabama. He had a love for the military because his father and four uncles served in WW II. Sadly, two of them were killed in combat while the other three, including his father, died soon after the war was over. With the death of his father, his mother was forced to take a job in a textile mill in Opelika.

Howard recalled, “My childhood was really rewarding to me but it was quite difficult…My sister and I was raised by our grandmother…She read from the bible to me and my sister every day….She taught me to never have hate in your heart…My father was drafted and everything we did at home with my grandmother, it seems like we were making cookies and saving syrup cans so we could pack cookies in ‘em to send to the people who were fighting the war.

In recalling his early experience with soldiers, Howard explained, “Opelika is right near a highway…only 28 miles from Fort Benning, Georgia. As a little kid, I could see all these military trucks going back and forth to Fort Benning…One time I was standing on the side of the road and a bunch of young paratroopers went by…I can remember their patches on their hats…I said I’d like to be a paratrooper. So when I joined the Army, that’s what I wanted to do was jump out of airplanes.” And Howard would go on to jump out of planes with the Army’s 101st Airborne Division.

Robert Howard attended schools in Opelika, Alabama, but dropped out to join the Army in 1956 at the age of 17. After basic training at Fort Jackson, Mississippi, he underwent advanced infantry training at Fort, Gordon, Georgia. Howard underwent airborne training at Fort Benning, Georgia, and received his “Jump Wings” in 1959. He was assigned to the 1st Brigade, 101st Airborne Division at Fort Campbell, Kentucky.

In July 1965, parts of the 101st Airborne Division deployed to Vietnam by ship and landed at Cam Ranh Bay. The remainder of the 101st were flown to Vietnam in 1967. Sgt. Bob Howard was none too happy with the 17-day voyage and the salt water showers, “You’d get in the shower and the soap wouldn’t lather…they had about 4,000 of us on a 2,000-troop transport…And you had to eat standing up with the ship rolling…I was eager to go to war, to get off that ship.” The landing was botched when the landing craft that took the men ashore let them off prematurely, in deep water. Howard recalled, “The water was about 12 feet deep… and I step off and I’m in the water and I’m thinking, ‘I’m going to drown before I even get on the beach.’”

After the 101st landed, they found out that the 1st Infantry Division had already secured the beach. After several weeks, Howard’s brigade moved north to clear the Vietcong from an area near Qui Nhon. In helping set up a battalion-sized base camp near Qui Nhon, Sgt. Howard was wounded for the first time.

The base camp had come under enemy fire around 2 am and Howard’s squad was sent out to set up a perimeter defense in an area that included a cemetery. As they were securing the area, Howard was shot through the jaw. The impact drove Howard backwards into a grave with a Vietnamese corpse. Not sure of the severity of the wound and in extreme pain, Howard chose to lie still until daylight. Howard used some colorful language to describe the three-hour wait in a grave beside a dead body.

Howard was discovered when a company commander was assessing the area the next morning. He was evacuated to a field hospital near Qui Nhon. At the hospital, Howard’s face was reconstructed and his jaw was repaired. While recuperating, Howard met a Special Forces colonel who was visiting one of his men. The colonel mentioned that Special Forces could use a man like Howard, so Howard asked the colonel if he could volunteer. Sometime after reporting back to his unit, Howard was told he had been selected for Special Forces.

Howard was sent to Saigon to train with the Special Forces Group. He was placed in a B-52 Unit which is a Special Forces detachment tasked with training the Civilian Irregular Defense Group and the South Vietnamese Special Forces, known as the Luc Luong Dac Biet. These groups were trained to conduct long-range reconnaissance patrols into uncontrolled and enemy territory. Each B-52 unit consisted of 11 officers and 82 enlisted men. At the end of his tour, he was sent to Fort Bragg, North Carolina, for further Special Forces training.

Howard distinguished himself in operation that was sent into Laos to destroy an enemy weapons and rice cache. The small covert group was called a Hatchet Force [a small group of American and South Vietnamese soldiers from the MACV-SOG]. A recon team had the site under surveillance and Howard’s group was inserted by helicopter to join them. Several helicopters were damaged by enemy fire but Howard was able to land and link-up with the recon team. The combined team searched the area and Howard cut down several enemy soldiers with his M-16 before being pinned down with his men by a machine gun hidden in an earthen bunker. Howard crawled toward the bunker and when close enough, sprang to his feet spraying the surprised occupants with deadly fire. About that time, another machine gun opened up from a position further up the hill. Howard called in an air strike to silence the new enemy position. After that, Howard crawled up the hill to check on the results. When the gun opened up again, Howard crawled even closer to a position just six inches below the gun barrel. He tossed a grenade into a small slit and was pummeled with a shower of dirt.

By now, a large group of NVA [North Vietnamese soldiers] were closing in. Howard retreated, picked up a Light Anti-Tank Weapon and returned to attack the bunker now occupied by the NVA. Disregarding the bullets flying all around him, Howard stood up and fired the rocket, opening a large hole in the bunker and causing the surviving enemy to flee. After that, Howard’s team was able to destroy the cache site. The mission was accomplished, largely due the one-man-army of Sgt. Bob Howard.

For his heroic efforts in that operation, Howards was nominated for the Medal of Honor. However, the nomination was downgraded to the Distinguished Service Cross because of the covert nature of the operation in Laos. [to be continued]