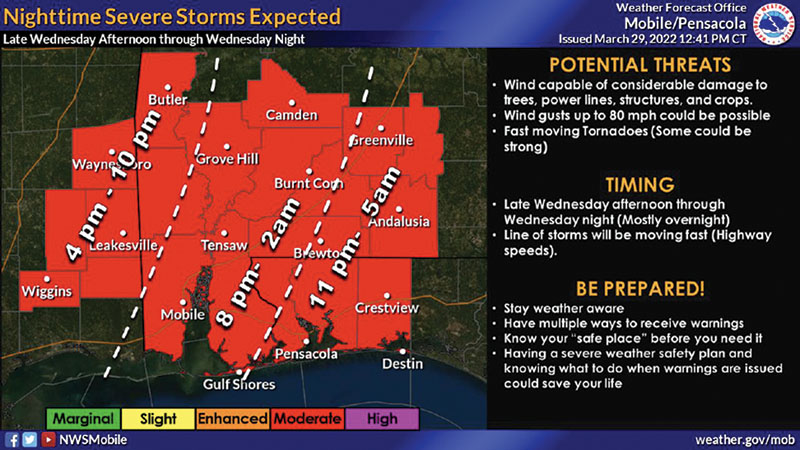 The National Weather Service reported that the storm will bring a “moderate risk” to the region, indicating that an intense squall line of thunderstorms could be a “ significant severe weather threat.”

Those threats will come in the form of wind damage and possible tornado activity. Winds could reach up to 80 miles per hour, according to the NWS.

Ahead of the line of thunderstorms, wind gusts as high as 55 miles per hour are expected during the day Wednesday and into the evening hours. A wind advisory is in effect.

Coastal flooding, especially in and around Mobile Bay, is expected and dangerous high surfs will impact beaches Wednesday and Thursday.

Localized flooding is also possible with 1 to 3 inches of rain, possibly more, expected in some areas. Early rainfall estimates for Andalusia are about 1.5 to 2 inches.

The storm is expected to travel through the Covington County area between 11 p.m. and 5 a.m. It will move into southeast Mississippi late Wednesday afternoon or early evening, continuing to rapidly move eastward. Gusty southerly winds will continue ahead of the mainline of storms with sustained winds of 20 to 30 miles per hour and gusts up to 45 to 55 miles per hour.

The line of storms is expected to be east of Covington County by 4 to 5 a.m.

UPDATE (March 30, 9:30 a.m.): The Covington County Emergency Management Agency has announced that a community shelter will be available. The shelter will be located at the Andalusia Jr. High School, 408 Fourth Avenue in Andalusia.  This shelter will open at 9 p.m. for those interested in staying (this time may change due to the track of the storm). This shelter will be open only until the storm pass over the county.  Do not attempt to come to the shelter during the storm. Officials ask those coming to the shelter to bring all necessary supplies for the stay. Such as chairs, linen, food, entertainment, etc.  The shelter is only available to provide a safe location during the storm. No pets allowed.