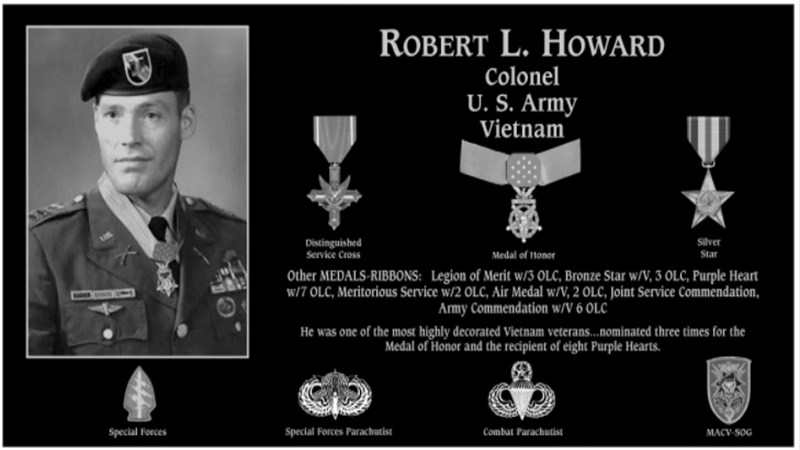 Col. Robert L. Howard and some of the 40 medals he was awarded. [Photo: Mt. Soledad National Veterans Memorial]

To further describe the “larger than life” soldier, Robert L. Howard, the author would like to quote a contemporary of his, Major John L. Plaster, U.S Army Special Forces, “Take all of John Wayne’s films – throw in Clint Eastwood’s, too- and these fictions could not measure up to the real Bob Howard. Officially he was awarded eight Purple Hearts, but he actually was wounded 14 times. Six of the wounds, he decided, weren’t severe enough to be worthy of the award. Keep in mind that for each time he was wounded, there probably were ten times that he was nearly wounded, and you get some idea of his combat service. He was right up there with America’s greatest heroes – Davy Crockett, Alvin York, Audie Murphy – the inspiring example we other Green Berets tried to live up to.” 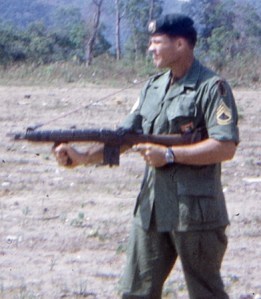 Howard rushed over to apply tourniquets and was wounded in the back and legs by an RPG rocket. After he had stabilized the Lieutenant, Howard picked up a Light Anti-tank Weapon [LAW] and taking several Montagnard [the American forces called them “Yards”] with him, proceeded to try and outflank the enemy. By now, they were taking fire from an enemy PT-76 amphibious tank.

Howard circled around and managed to get behind the enemy tank and fire a rocket into the turret. It took two rounds before the tank was silenced. Increasingly, the Hatchet Force was taking fire from the enemy and Howard’s concern grew as his Captain seemed unclear in his directions. While they struggled to establish a defensive perimeter, a Medevac helicopter approached to evacuate some of the wounded. It quickly came under fire and began losing altitude until it crashed, not too far from the tree line where the enemy had opened fire. Ignoring his own wounds, Howard sprinted across the field to help the crew of the burning Huey.

When he reached the helicopter, he could see that one of the door gunners was dead and the other one unable to move. While the pilot helped his co-pilot get free of the wreck, Howard put one of the door gunners on his back and told the pilot to follow him back to his unit. The remains of the Hatchet Force poured suppressing fire into the tree line as the men struggled back to their own lines. After falling several times from exhaustion, they managed cross the field and rejoin Howard’s unit. By now, another Medevac helicopter had landed and Howard was urged to get onboard with the other wounded soldiers. He refused because he wanted to stay and finish the job.

Howard went out on patrol the next day even though he was still suffering from exhaustion and the wounds from the previous day. He surprised three NVA, killing two and taking one prisoner back to camp for interrogation. They learned from the prisoner that they were surrounded by a battalion and that a regiment was just a few miles away. By this time, another Medevac helicopter had arrived and Howard’s Captain chose to leave despite only having a flesh wound. That left Howard and the remaining NCOs in charge. They managed to survive another night before being extracted the next day. Again, Howard was recommended for the Medal of Honor. This time he received the Silver Star.

There were many times when Howard exhibited a fearless, quick-thinking mind. On one occasion, he was standing in a mess-line in Vietnam when a Vietnamese terrorist drove by on a motorbike and hurled a grenade. Howard quickly grabbed an M-16 from a startled security guard and shot the driver dead. He then chased down the passenger and killed him too.

On another occasion, a SOG platoon [Special Operations Group] and recon team led by Joe Walker had been overrun near a major Laotian highway and most of his men killed or wounded. Howard took another recon team and was inserted some distance away from the trapped men. After dark, Howard managed to make his way to the trapped men. He crawled among the dead bodies, feeling for a heartbeat until he found one. Joe Walker’s lanky legs were a giveaway as were his horn-rimmed glasses. Walker remembered saying, “You sweet Son of a Gun!” Howard managed to drag Walker out safely. Howard was not nominated for any award this time.

Another of Howard’s exploits seems right out of the Old West. He and his recon team had been inserted near the Ho Chi Minh Trail for a night operation. Howard could smell the exhaust from the Soviet-built diesel trucks as the NVA convoy approached in the darkness. Sprinting alongside one of the trucks, Howard took out a Claymore mine. Twirling the detonation wire overhead like a lasso, he let the mine fly into the back of a truck. Falling down in the bushes beside the road, Howard let a couple more trucks go by before detonating the mine. The resulting explosion created a blazing hulk in the middle of the road, stopping traffic. The wreckage burned for hours before it could be pushed off the road. In the meantime, Howard and his team had quietly melted back into the jungle and made their escape.

Howard was aware that recon units were usually under surveillance when they were inserted or extracted. Recon units often left behind booby-trapped items when they left, such as 35mm cameras that blew up when opened. The idea was to make the enemy less eager to strip American bodies. An innocent looking canteen with a sloshing liquid was set to actuate the second time it was opened. Howard decided to make a booby-trap of his own.

He found an old foot-locker, painted it red, stuffed it full of TNT with a time-delay switch and left it in an LZ [landing zone] that his team had just left. Howard and his men circled back to a point where they could observe the LZ. Howard recalled, “Sure enough, people were coming from everywhere….I actually think some of them were in the process of opening it when it went off. It blew stuff for a quarter of a mile.”

Most of Sgt. Robert Howard’s exploits occurred before 1970, when he was part of the secretive U.S. program to interdict NVA personnel and supply infiltrating into South Vietnam via the Ho Chi Minh Trail. President Richard M. Nixon acknowledged U.S. involvement in Laos for the first time in March 1970. He estimated that since 1964, more than a half-million NVA troops had used the trail to invade South Vietnam. As soon as the U.S. involvement was made public, Congress passed the Cooper-Church amendment to the 1970 defense appropriations act. It prohibited the use of U.S. ground troops in Laos.

It is the author’s opinion that such an amendment hand-cuffed the U.S. military. It allowed the enemy to move soldiers and supplies into South Vietnam, unimpeded, where they could conduct attacks and quickly return to the safety of Laos or Cambodia. The book, “Dereliction of Duty” by H.R. McMaster, is an indictment of that type of civilian interference that handicapped the U.S. military effort in Vietnam.

In next week’s conclusion, Sergeant First Class Robert L. Howard will finally receive the Medal of Honor for which he had been nominated for the third time [To be continued].