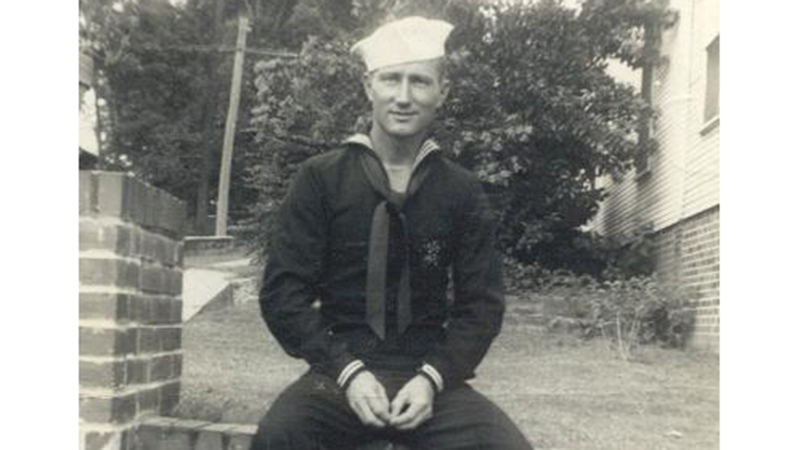 John Maxwell [Max] Walker was born December 21, 1913 in Goshen, Alabama, and was the seventh of ten children. His parents were William R. and Leona Carter Walker. The family moved to Andalusia, Alabama, around 1923 where he attended school for 10 years. He married Nell Rebecca Walters in 1938. At some point, they moved to Montgomery, Alabama, where Max worked as a carpenter. A son, Ariel, was born there. Max was drafted in 1944 and chose to enter the Navy.

After basic training, Max was assigned to the aircraft carrier, USS Randolph [CV-15], which was under construction in Newport News, Virginia. He would become a “plank owner,” the name given to all members of a new ship’s crew at launching. Randolph completed her shakedown cruise in the Caribbean in 1944 and proceeded through the Panama Canal to San Francisco, California, where she would be outfitted with armament.

After outfitting and provisioning, Randolph sailed for Ulithi Atoll in the Caroline Islands. They were part of Task Force 58 under the command of Admiral Marc Mitscher. Max Walker was a Fireman, a rate assigned to boiler room personnel in B Division in the Engineering Department. [As a side note, two other men from Andalusia were serving on the Randolph at Ulithi – the late Jurrell Davis and the late Charles Cope of Andalusia].

From February – March, 1945, Randolph participated in airstrikes over Tokyo, Japan, at Chichi Jima and Iwo Jima. In addition to his work in the boiler rooms, Max stood four-hour watches in those spaces daily. Those boiler rooms were very hot at all times but especially so where the Randolph was located in the South Pacific.

On the night of March 11, 1945, the Randolph lay quietly at anchor at Ulithi, swaying gently in the cool Pacific breeze. The quiet night lent a false sense of security to the crew of a ship that had so recently been in battle. The breeze blowing across the ship’s fantail offered the chance for Max to take a quick nap before taking the midwatch [midnight – 4 a.m.] in the boiler room. On his way to the fantail, Max encountered several friends who were part a musical group that he often played with on the ship. That night they were having a “jam session” in one of the berthing areas. 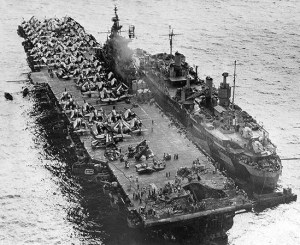 USS Randolph with repair ship, USS Jason tied up alongside after kamikaze damage near Ulithi during WW II. Note the large hole on the fantail where the kamikaze hit. [Photo: ussrandolphcv15.com]

The men knew that Max played a “mean fiddle” so they asked him to join them. After retrieving his fiddle, Max joined the men and played several songs. After that, Max told the men that he needed to get a nap before going on watch. As he started to leave, the men begged him to play just one more song. Max later recalled, “We had just started to play ‘Turkey in the Straw’ when the kamikaze hit the fantail.” For the rest of his life, Max Walker believed that God had intervened that night and saved his life. The Kamikaze hit the fantail where Max had intended to take a nap.

The attack occurred about seven minutes past 8 p.m. The plane was a twin-engine Yokosuka P1Y1 bomber [U.S. Code named “Frances”], carrying a single 1,700 lb. bomb. It crashed into the Randolph’s fantail, setting off a tremendous explosion. The conflagration was fed by gasoline, ammunition and oxygen cylinders aboard Randolph. More than 4,000 square feet of flight deck was destroyed and only the heroic actions of Randolph’s damage control crews saved the 27,000-ton ship. The blast and fire killed 27 sailors and wounded 105.

A Navy repair ship, USS Jason [AR-8], was brought alongside Randolph to assist her sailors with repairs. The enormous repair job took 19 days and required more than 30 tons of steel plate, 29 tons of steel “I” beams and 7,500 feet of timber for the flight deck. While the ship was being repaired, Max visited the machine shop on the Jason. They allowed Max to use the shop to fashion a copper box that he would use to store his Bible. As soon as the repairs were completed, Max and the Randolph sailed for Okinawa to take part in the invasion. Her planes took part in the air support for the invasion troops.

The Randolph led a charmed life throughout the Okinawa campaign. Max recalled that they were often attacked by kamikazes but managed to avoid any hits. At least 149 U.S. ships were hit, of which 30 were sunk with the loss of approximately 5,000 lives. Randolph dodged many attacks but remained unscathed. Ironically, on June 7, 1945, Randolph was again struck by a plane, but this time it was a U.S. Army Air Corps P-38 fighter/bomber. Two P-38s were doing practice runs on Randolph during a mock attack when one lost control and crashed into the ship. More than 10 aircraft were destroyed and 13 sailors killed. The admiral aboard the Randolph jokingly threatened to shoot down any Army Air Force planes that overflew his ship after that.

In another irony of the war, one of Randolph’s pilots was among several U.S. prisoners of war who were killed by the atomic bomb dropped on Hiroshima. Ensign John Hantschel had crashed at sea on July 25, 1945, and was picked up by a Japanese fishing boat. He was taken to a prison of war camp on the mainland and eventually transferred to a prison camp at Hiroshima.

The Randolph completed her role in the war and returned to Norfolk, Virginia, in October 1945. Max Walker was discharged at that time and returned to Andalusia. He started the J. Max Walker Construction Company. Max was a self-taught architect and builder. One of the more notable and expensive homes built by Max’s company was the Henderson home on East Three Notch Street. [it still stands directly across from the First Baptist Church]

Mrs. J. D. [Kate] Henderson had asked several well-known architects to draw up plans for her home but none satisfied her. She asked Max Walker to try his hand and the resulting plans were to her liking. The Henderson home was one of the many fine homes constructed by Max and his company. This company was also among the first in the southeast to build pre-fabricated homes.

The Walkers’ second son, David, was born in 1946 and a daughter, Geneva, was born in 1950. In 1953, Max became disabled because of severe headaches when exposed to sunlight. He gave up the construction company that year. Max bought his wife’s family farm located near Brooklyn, Alabama, and moved there in January 1954. After moving, Max’s condition improved somewhat but it never totally went away. Most of the time, he wore dark sunglasses and a broad-brimmed hat to protect his eyes from the sun. Max was hired as the City of Andalusia’s Building and Electrical Inspector in 1957. He also did FHA and VA inspections and appraisals part-time. Many people knew Max Walker as an ordained Primitive Baptist pastor. He served several churches in Covington County including the Union Primitive Baptist Church in Andalusia. 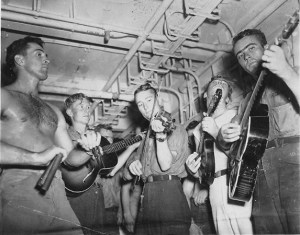 Max Walker was a man of many talents – artist, self-taught skilled architect and builder, mathematician and a gifted player of several musical instruments. His friends said that above all, Max loved his fellow man. He often attended singings in churches around the county. Max wrote the music and lyrics to several songs and held a patent for a wire skinning blade which Klein & Sons incorporated into one of their existing electrical knives.

Max’s son David said this about his Dad, “Daddy was one of the smartest men I ever knew – he was a gifted mathematician, he figured out how to do a cube root and had an almost photographic memory.”

Max’s wife Nell died on August 12, 1972. Max retired from the City of Andalusia in 1979 and died from a brain tumor on November 5, 1980. His funeral was held at the Elam Primitive Baptist Church in Goshen, Alabama, and he was buried at the church cemetery.

After his death, The Andalusia Star-News had this to say in an editorial: “Max Walker died last week. The City of Andalusia building inspector was many things to many people, but mainly he was a friend of all….Although he sought no recognition and shunned publicity, Walker left his mark in Andalusia in more than one way….many structures in the area were either built or designed by him….Plans for the Andalusia Fire Station were designed by Max Walker and submitted to an architect for blueprints. It was then only fitting that the flag at the fire station was flown at half-mast the day of his death.”

The author lived near the Walker family in the early 1950s and was friends and classmates with the late Ariel Walker. We spent many a summer day searching for arrowheads around Green Acres and cooling off in the Hooper pond. On one occasion, we found two oil drums near the pond and decided to build a makeshift raft using some baling wire and two-by-fours. Ariel wanted to go first so we pushed it out into the pond and he climbed aboard, only to have the wood platform fall apart, dumping him into four feet of water. We managed to make it safely back to shore when I noticed a large, bleeding gash on Ariel’s forehead. We managed to call the Walkers and they picked up Ariel and took him for stitches. That night, Mr. Walker came to visit my parents [who still knew nothing about the accident] and “explained” [not the exact description] that it would be best if John and Ariel stayed away from Hooper Pond and forego any more building projects.

The author thanks Max Walker’s son, David, for his help in putting together this article. As a side note of interest: the author was a newly commissioned Ensign when he spent two months aboard the Randolph in late 1962. One of the propellers from the kamikaze plane was still mounted on a forward bulkhead in the hanger bay with a plaque listing those crew members killed in the attack.