Bulldogs advance with wins over Beauregard 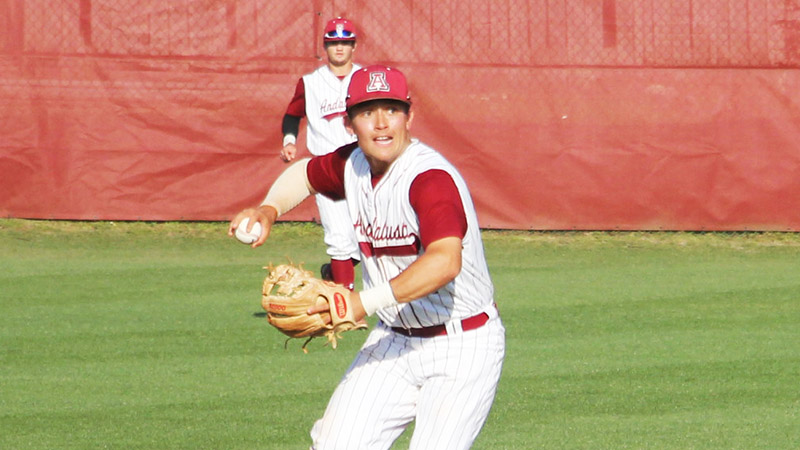 Bulldog shortstop Ayden Amis takes care of a ground ball during the first of two wins against Beauregard in the first round of the state playoffs Friday. (PHOTO BY ROBERT BLANKENSHIP)

Andalusia completed a two-game sweep of Beauregard in the first round of the state playoffs to advance to the second round where they will take on UMS-Wright.

In game one, the Bulldogs fell behind 2-1 early, but came storming back in the bottom of the fourth. With two men on, Nino Freeman ripped a double to give Andalusia a 3-2 lead. Connor Dalton followed with a hit to left field that was mishandled by the outfielder allowing Freeman to score, increasing the lead to 4-2.

Andalusia added to its lead in the bottom of the fifth. Conner Brooks led the inning off with a double down the first-base line. Parker Adams followed with an infield hit. With one out, a passed ball allowed the runners to move up to second and third. Tucker Glenn took advantage of the opportunity with a single to centerfield driving in both runners.

Garrett Blackston followed by reaching on a fielder’s choice and would score on a double by Freeman.

Andalusia would add another run in the sixth when Noah Curry hit a long double to center field, driving in Amis who had led the inning off with a double.

Pitcher Aksh Patel would get the final three outs in the seventh to secure the 8-2 victory in game one.

In game two, Andalusia jumped on top quickly, taking a 7-1 edge going into the fifth inning. But, Beauregard battled back in their half of that inning, cutting the lead to 7-5.

Andalusia would score an important extra run, which was the difference as Beauregard scored twice to make the final 8-7.

“The stakes are always high in an elimination game and we knew Beauregard could battle back. But, I’m proud of our team for showing their resiliency and getting the win,” said AHS Coach Tyler Dent.

Jake Coon earned the win in the second game. Connor Brooks pitched in relief and Amis came in to strike out the final batter of the game.

“I was proud of our guys for competing the entire time. They didn’t let up and did a good job in all facets of the game. They played with a lot of energy and focus. It was a really good night,” Dent said.

The Bulldogs saw several good performances at the plate. Among them was right fielder Connor Dalton.

“Connor has played tremendous baseball, particularly over the past month. He does a good job for us in right field and as our nine-hole hitter is aggressive and makes contact. He’s done a great job in making things happen for us late in the lineup,” Dent said.

Andalusia (14-12) will host UMS-Wright for three-game series in the second round on Friday, beginning at 4:30 p.m.