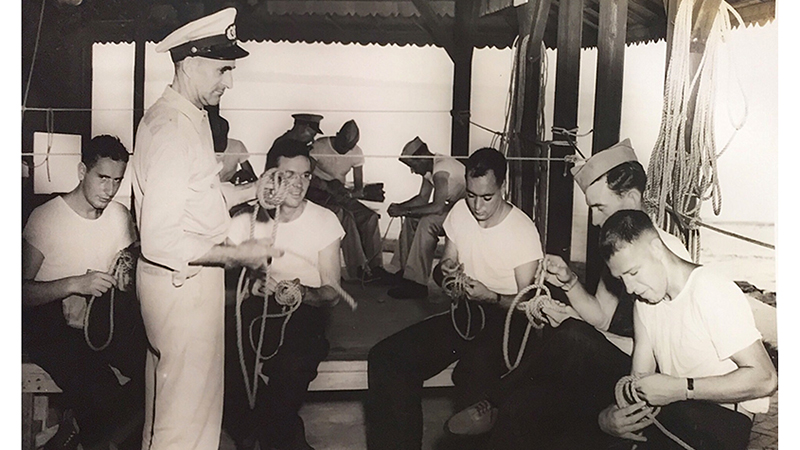 A Navy petty officer teaching Army soldiers the art of knot-tying as part of their training to serve on ships of Operation Ivory Soap. [Source: encyclopediaofalabama.org]

In researching a future article about the late Charles R. Loman, a WW II veteran and leader in our community, I came across Operation Ivory Soap, a secret project that took place right here in Alabama. Lowman was a member of the U.S. Army Air Corps during the war and served aboard the S.S. Maj. General Robert Olds, an aircraft repair ship that had been converted from a Liberty ship. A little historical background is needed to understand the need for Ivory Snow.

During the air war over Europe during WW II, the U.S. Army Air Corps used established air bases in England and later bases in France, Italy, Belgium and the Netherlands to maintain and repair aircraft. On those bases were machine shops and spare parts that kept the planes flying. The shops were staffed with skilled machinists who had the tools to do the work. The war in the Pacific posed a different problem because there were fewer bases and they were further apart. 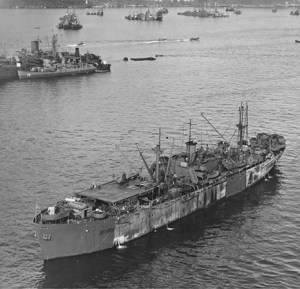 The Aircraft Repair Ship SS Brig. Gen. Asa N. Duncan was one six converted Liberty ships used in Operation Ivory Soap. It is pictured here off the coast of Guam in 1945. [Photo: Wikipedia]

Army General Douglas MacArthur and Navy Admiral Chester Nimitz were jointly responsible for planning and executing a plan to defeat the Imperial forces of Japan in the Pacific. Their strategy employed a tactic called “island-hopping.” That plan called for skipping over some heavily defended Japanese-held islands in order to save time, manpower and materials. By only invading islands of strategic importance, the Allies had the element of surprise since some obvious targets could be by-passed. However, the island-hopping strategy made it more difficult to repair and maintain aircraft over long distances.

As a matter of strategy, the Allies prioritized the invading of islands that held airfields. With those islands in Allied hands, they would be able to maintain air superiority across the Pacific until they were finally within range of the Japanese homeland. The tactic worked well early in the war but created logistical problems as more islands were conquered.

Faced with that problem, the commander of the Army Air Forces, General Henry H “Hap” Arnold, and his staff came up with Operation Ivory Soap. The project began with the modification of six Liberty ships and eighteen 180-foot long freight/salvage [F/S] auxiliary ships. The Liberty ships were modified into Aircraft Repair Units with a complement of 344 men, while the 18 smaller ships were turned into Aircraft Maintenance Units with a complement of 48 men. The modifications took place at Brookley Army Air Field located in Mobile, Alabama, and required about five months to complete. The entire Operation Ivory Soap was top secret and was not declassified until 1953.

Brookley Field was originally Bates Field, the Mobile municipal airport. In 1938, the Army Air Corps took over the 1,000-acre facility and renamed it Brookley Army Air Field. At the height of its wartime operations, the facility employed some 17,000 skilled workers [including the author’s father, Frank Vick]. During WW II, Brookley Field was the major radar repair facility for the Army Air Corps and it also repaired and calibrated the top-secret Norden Bombsight.

U.S. merchant marines operated the modified victory ships which carried a large inventory of lumber, steel, aluminum and other materials needed for any repair job. They also carried an inventory of spare parts that ranged from the smallest battery to whole aircraft wings. Machinists aboard the ships had to be able to repair tires, carburetors, radars, parachutes – you name it, they had to be able to fix it. The major problem encountered with implementing Ivory Soap was to find the personnel and train them into a skilled workforce. That problem was solved when Lt. Col Mathew Thompson met the owner of the Grand Hotel in Point Clear, Alabama. 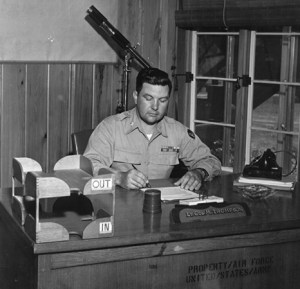 Lt. Col. Mathew Thompson at his desk in Suite 1108 in the Grand Hotel at Point Clear, Alabama during Operation Ivory Soap. [Photo: mobilebaymag.com]

Lt. Col. Thompson had been placed in charge of training the crews for those ships. He was a member of the Army Air Corps and a former member of the British Royal Navy. Thompson was given just two weeks to organize a program to train the skilled repairmen and find a place for them to train. Thompson had heard rumors that the Grand Hotel might be closing and he was intrigued since the hotel was located across Mobile Bay from Brookley Army Air Base. The beautiful old hotel was located on the eastern shore of Mobile Bay at Point Clear, Alabama.

The Grand Hotel was owned by the Waterman Steamship Company. Thompson set up a meeting with Ed Roberts, the head of Waterman, to discuss his idea. In an interview some years later, Thompson recalled that Roberts offered to allow the Air Corps to use the hotel for free. A surprised Thompson told Roberts that it “just didn’t seem right” for his men to use the hotel for free. Roberts came back, “So give me a dollar.” With a handshake and a one-dollar bill, the deal was struck.

After the meeting, a contract was drawn up: “It is hereby agreed between Ed Roberts and Lieutenant Colonel Mathew Thompson, representing the United States Government, to lease said premises of the Grand Hotel to the Army Air Corps for the sum of $1 per year for the duration of the war.” Once the deal was sealed, the project needed a code name.

Thompson later recalled that during the meeting, someone went to the restroom and came back with an idea, “Why don’t we call it Ivory Soap, since we are deploying floating repair units?” Many people may not be familiar with Ivory Soap but it was the soap of choice for many restrooms back then – and it floated. With its official title, Operation Ivory Soap, the project got underway on July 10, 1944.

Suite 1108 in the Grand Hotel became very special because it housed Lt. Col. Mathews during Operation Ivory Soap. It was a corner suite located at the far end of the east wing. The scene from the windows of Suite 1108 provided a classic southern view: live oaks with wispy, long-hanging strands of gray, Spanish moss, manicured emerald-green lawns, all framed by the backdrop of the beautiful waters of Mobile Bay. It was from such a unique location that Lt. Col. Thompson ran Operation Ivory Soap for five months in 1944.

Almost overnight, the hotel received a make- over with a nautical motif to accommodate the Navy-type training. The trainees were required to refer to the floors as decks and they were allowed to smoke, but only “when the smoking lamp was lit,” just as on a ship. A ship’s bell was used to keep time, just like a Navy vessel. Thompson would later recall, “We had to strip the hotel. The troops ate in the dining room, a mess hall then. I had a 40-foot tower built for them to jump from so they could learn to abandon ship. There was a lifeboat right out there, with oars…Men from the Naval Station in Pensacola would fly over and scare the living-hell out of the men there.”

The ships were gutted and totally made over into Aircraft Repair Units. The conversion created new machine shops, equipped with the latest machine tools. Shops were added to accommodate sheet metal work, wood work, electrical work, painting and multiple fabrication units. There were air-conditioned shops for critical work done on cameras, aircraft instruments and the like. There was also a shop that generated oxygen used aboard the bombers and fighters.

One important feature was the addition of a hospital and orderly room to treat wounded soldiers and sailors. Each ship carried two large R-4B Sikorsky helicopters that were used to locate downed aircraft and deliver injured flyers to field hospitals. They also ferried mechanics, shipwrights and electricians to remote islands when they were needed. The repair ships also carried two motor launches and two DUKWs amphibious trucks [ducks] that were used to ferry parts that were too heavy for the helicopters. 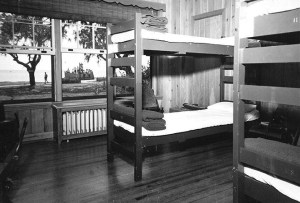 Typical room in the Grand Hotel that housed the men who trained there during Operation Ivory Soap. The bunk beds usually slept four men in a room. [Photo: The Grand Hotel]

Even though the operation was top secret, local residents were able to observe much of the outside training. The men were given a sailor’s training in seamanship, knot-tying, swimming, navigation, ship identification, cargo handling and more. The ship’s crews also wore sailor uniforms. Every facet of their training was geared toward making airmen into sailors.

The men trained in Alabama’s summer heat which prepared them for the climate in the Pacific. The lectures were sometimes given outside in search of a cool Gulf-coast breeze. Much training was done in the waters off Point Clear and the men could often be seen paddling boats as they practiced “abandon ship” maneuvers. The transformation of the men was both impressive and efficient, taking just five months to train more than 5,000 men.

Lt. Col. Thompson joined the men when they deployed to the Pacific Theater. By the end of the war, the men and ships of Operation Ivory Soap had participated in Allied invasions of the Philippines, Guam, Iwo Jima and Okinawa. Many hundreds of B-29s and P-51s were repaired and returned to fight again because of those airmen turned sailors.