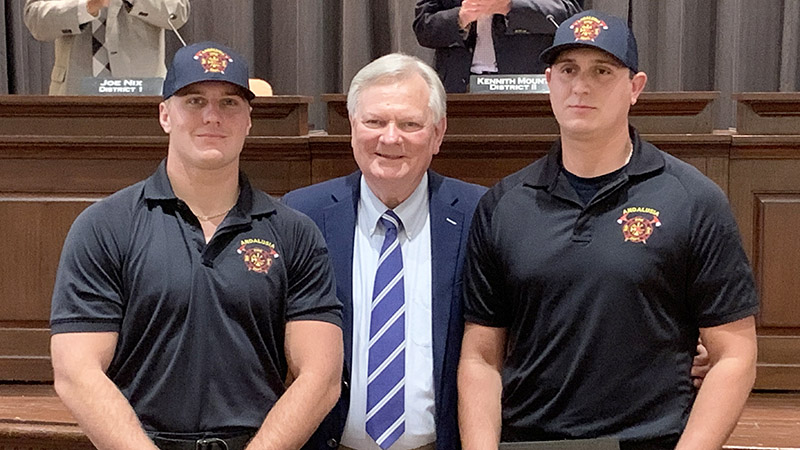 Andalusia Firefighters Lane Prevett, left, and Kyle Byrd, right, were presented with a commendation by Mayor Earl Johnson Tuesday. The two firefighters entered a burning house in March and saved a mother and son suffering from smoke inhalation. (PHOTO BY ROBERT BLANKENSHIP)

During a meeting where two firefighters were recognized for their life-saving heroics, the Andalusia City Council approved a Fire Department Strength Plan that will provide higher wages for its employees.

AFD firefighters Kyle Byrd and Lane Prevett were each presented with a commendation for their actions on March 19. The two responded to a house fire involving an entrapment. When they arrived at the scene, they entered the burning house and rescued a mother and son who were huddled in a back bedroom, disoriented from smoke inhalation.

In the presentation of the commendations, Mayor Earl Johnson said the two firefighters, along with the others who responded to the scene, are true heroes.

“We have no doubt that these two young men saved a mother and child from serious injury and, quite frankly, saved their lives. Each of them share the credit with the co-workers who were with them that day. We thank them all for their support in allowing Kyle and Lane to enter the home and save the lives of two people,” Johnson said.

Following the presentation, the council took up a resolution to amend the fire department’s strength plan to raise salaries and make the department a more desirable workplace. According to AFD Chief Russell McGlamory, the department often trains firefighters only to see them leave for higher-paying jobs in the area.

McGlamory requested the pay increases based on an 18.33 percent turnover rate over the last three years. McGlamory said that since 2011, he has lost 39 firefighters to other departments. The department currently has 19 firefighters.

“Since 2011, we have lost 39 firefighters. Many of those have gone to work at other departments with better pay. They will say they love it here, but that it is a financial decision and that they feel like they didn’t have a choice,” McGlamory said in a work session preceding the council meeting.

Prior to the approval of the resolution by the council, the fire department’s lowest wage was $9.41 per hour. McGlamory said other departments in the area pay more, even for uncertified personnel. As examples, he cited pay rates for various area cities like Troy, Greenville and Brewton.

The move increased pay for new hires from $9.41 an hour to $11.80 per hour. Other pay rates also were adjusted to maintain pay equity.

Johnson said the total cost of implementing the plan will be $216,500 per year. The total estimated cost for the current fiscal year is $81,427. Those amounts include wages and benefits.

“The city can afford this and it will make Andalusia competitive with others in the area. It will also provide our firefighters with a pay they have earned and deserve,” Johnson said.

The strength plan to raise wages at the fire department was approved unanimously by the council.

The next city council meeting is scheduled for Tuesday, May 17, 6 p.m. at city hall. A work session precedes the meeting at 5:30 p.m.