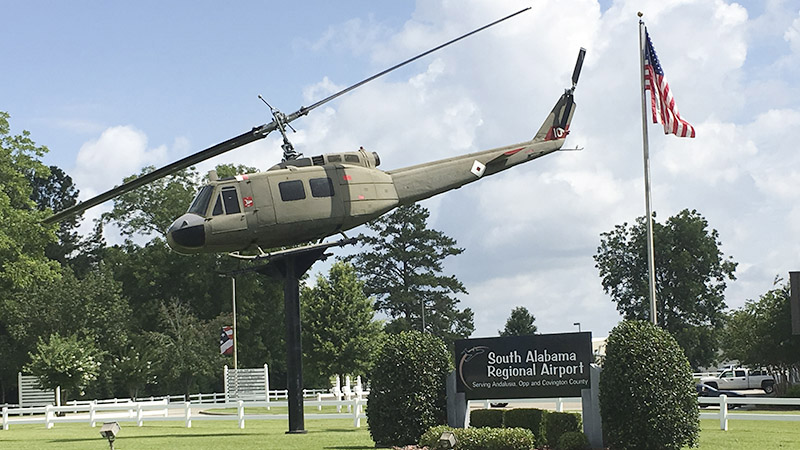 A total of 26 grants were awarded to Alabama airports and among those are the South Alabama Regional Airport and the Florala Municipal Airport. In all, Alabama airports received funding of over $12.5 million. The funding was awarded by the U.S. Department of Transportation for various airport improvements to support infrastructure construction and safety advances.

The Florala Municipal Airport will receive $850,000 to construct an apron and taxiway.

SARA Executive Director Jed Blackwell said the work associated with the work at that airport began Tuesday this week and, weather permitting, could be done on Monday.

“We have a five-year program for our airport. Every airport that is certified receives $150,000 in federal or state funding, but you can apply for more than that if you have a specific need,” Blackwell said. “Our need was to ensure our runways and taxiways stay current. We wanted to fill the cracks that have developed due to aging, along with restriping and remarking the runway. We are very appreciative to Sen. Shelby, the FAA and ALDOT for supporting us in this grant process.

“Our runway is one of our most important assets in Covington County because it is what brings in aircraft for economic development recruitment. We certainly want to keep that upgraded and in good condition. With this money we are able to do that.”

Blackwell added that the airport will be receiving two other grants this year for other projects.

The grant awards were announced by U.S. Senator Richard Shelby.

“I am pleased that DOT recognizes the importance of investing in these 25 airports,” said Senator Shelby. “The state of Alabama’s aviation industry is rapidly growing and these safety and security advancements and infrastructure upgrades will be transformative. I look forward to seeing how this $12.5 million helps many of our airports better serve their communities and contribute to local economies.”