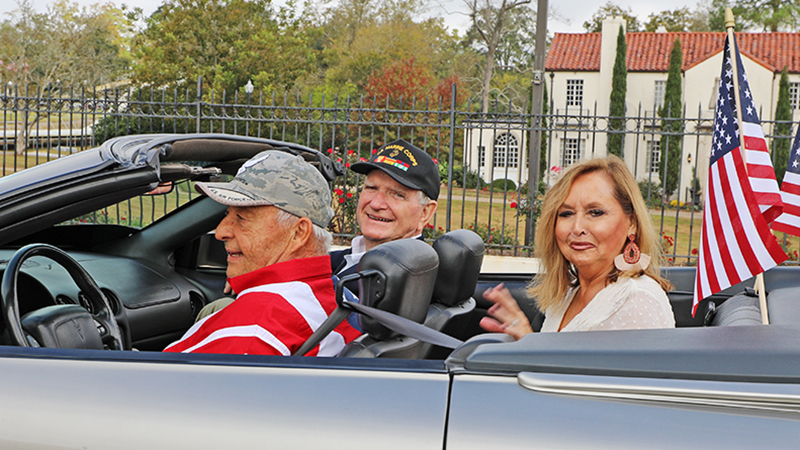 Andalusia native Sam Nichols, sitting in the passenger's seat, rode in the City of Andalusia's Veterans Day parade in 2021. (PHOTO BY MICHELE GERLACH)

In October of 1966, when most young men in America were doing all they could to avoid going to Vietnam, Andalusia native Sammy Ray Nichols did something different. 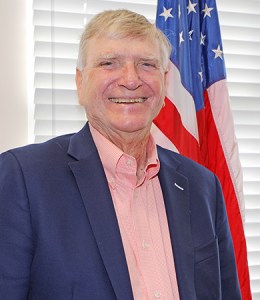 Andalusia native Sam Nichols enlisted in the U.S. Marine Corps in 1966 and served in Vietnam until 1968. He passed away on May 13.

He left Troy University and joined the U.S. Marine Corps. Or, as he explained in his Veterans Day speech here last November, “I was a student at Troy, but I figured out I was wasting my time and my daddy’s money. So I hitchhiked to Montgomery and joined, and then I hitchhiked home to Andalusia.”

Sam reported to Parris Island, S.C., for basic training on Jan. 2, 1967, graduating second in a platoon of 75. In April, he was transferred to California for additional training, and in August of that year, he was transferred to Southeast Asia, where he was assigned to the 3rd Marine Division and 1st Battalion 4th Marine Regiment. He was a radio operator for field artillery fire.

On Veterans Day, he talked about how amazed he was to bump into Andalusia friends in Vietnam, even though they were 10,000 miles from home, and to have normal conversations in the midst of a war. One of those was Lester O’Neal.

“We were walking on both sides of a dirt road, against the traffic,” he recalled. “The jeeps kept flying by. Here comes one and riding shotgun in the jeep was Lester O’Neal.

“I shouted ‘Big Time,’ ” Nichols recalled, noting the hometown moniker for O’Neal. “The driver slammed on brakes and we had a mini-reunion there.”

Two days later, Sam was in a bunker and someone hollered down, “There’s somebody here to see you.”

“There was no convoy, no tanks, no troops. Just Lester and a driver. For two Andalusia boys to meet and have a reunion 10,000 miles from home was an amazing thing.” 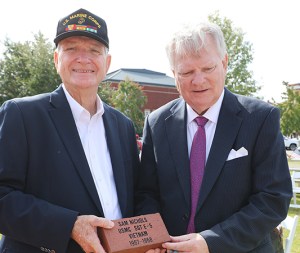 Andalusia Mayor Earl Johnson, right, presents a memorial brick to Sam Nichols that was placed alongside other veterans the city’s Veterans Memorial.

In June of 1968, Sam was med-evaced to a Marine Corps Field Hospital in Dong Ha, South Vietnam, and later to a U.S. hospital ship, the U.S.S. Repose, where he was treated for malaria.

“To get your fever down, they’d take you to the shower and turn cold water on you. You would shake and shiver until the fever passed,” he recalled last fall. A friend who also contracted malaria in Vietnam was not so lucky – he succumbed to the disease.

Sam‘s 13-month tour ended in August of 1968, and he spent the remaining 18 months of his enlistment in Jacksonville, N.C., where he was promoted to Sergeant (E5).

Following his enlistment, he went back to Troy State in 1970. He had met the woman who would become the love of his life, Ellen, on a blind date that year. Sam completed a marketing degree in 1972, but soon realized business was not his calling and pursued an education degree. This time he got it right, and went on to spend 37 years in public school service as an assistant principal, principal, worked in the central office, and in 2005, was named superintendent of Dothan City Schools.

“I’m proud to be one still living,” Sam said last November. “You’ve got to keep on keeping on.”

But sadly, Sam became another statistic of the Vietnam War on May 13, when he died of complications from lung disease. It was six months and two days after he had noted in his 2021 Veterans Day speech that, “Long term exposure to Agent Orange claimed more lives than the 58,000 who died in country.”

Graveside services with full military honors were held at 1 p.m. on Tuesday, May 17, at Sunset Memorial Park in Midland City. The minister was one of his former students. Sam’s coffin was placed on a caisson pulled by his pall bearers and followed by his family, all dressed in navy at his request. A canon salute was followed by “Taps,” and a helicopter hovered as two Marines folded the flag from his casket and presented it to his wife, Ellen. After the service, Ellen, the children and grandchildren placed flowers and small flags atop the casket.

On April 29, Sam was one of six people selected for recognition during Andalusia High School’s 2022 homecoming as a recipient of the Robert W. Brown Andalusia High School Outstanding Graduate Award. It is the AHS Scholarship Foundation’s hope that his family will accept the honor in his behalf in September.

Nichols was the guest speaker at last year’s Veterans Day ceremony in Andalusia. He is pictured above with other veterans who attended the event.

Some veterans quietly put their military service behind them; others wear it proudly. From January of 1967 until he left this earth, Sam Nichols was a proud Marine who never forgot how lucky he was to come home from war, and lived a life of service in gratitude for that blessing.

Please note: On Memorial Day, signs designating Hwy. 55 between Andalusia and Florala as the Rodney J. Evans Memorial Highway will be unveiled. Evans is the county’s only Medal of Honor winner. The traditional Memorial Day ceremony will follow at the Covington Veterans Monument at 10 a.m.

Michele Gerlach is the communications director for the City of Andalusia and a member of the Covington Veterans Foundation board. She may be reached at michele.gerlach@cityofandalusia.com.