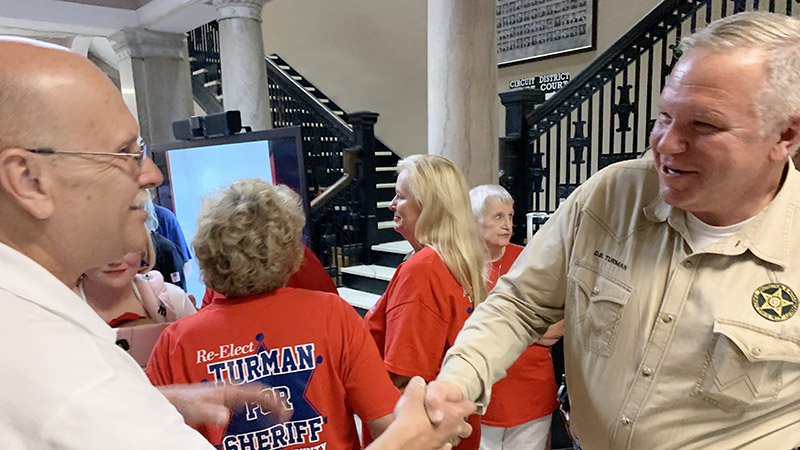 Turman claimed 5,539 of the votes from 26 county precincts, which was  60 percent of the total votes cast. Meeks finished the night with 3,702 votes, which was 40 percent.

“Holding and running for an office at the same time is tough and I couldn’t get around to knock on everyone’s door. But I had a lot of good help. We had cook-outs that were well attended and they are the people I have to thank for that. They made it happen. I have to thank my family and all those who volunteered to help with the campaign,” Turman said.

As for the voters, Turman said he looks forward to serving them and meeting the responsibilities of the office.

“I would be lying if I said I wasn’t nervous coming in. But, after that first box came in I calmed down and it was the beginning of a great night. I’m excited about getting to work and furthering the sheriff’s office and building it up for the future. I truly appreciate the support and confidence that the people of Covington County have given me,” he said.

Norman Hobson also won as an incumbent in the race for Coroner. He received 53 percent of the county vote while his two challengers, Wilson “Eddie” Rowell finished with almost 26 percent and Kelley Averill Lynn claimed 21 percent.

In the race for State Senate, Dist. 31, Mike Jones Jr. claimed the most votes in Covington County with 52.6 of the votes. But, Carnley holds an advantage across the district as he went on to claim just over the 50.2 percent of the total district vote, possibly avoiding a runoff with Jones if he maintains 50-plus percent of the vote after provisional ballots are counted. Norman Horton received 9.4 percent of the votes in that race.

Carnley took a big edge in his home county of Coffee where he received 66.7 percent of the vote, compared to Jones’ 23.4 percent and Horton’s 9.9 percent.

Jones came out on top among voters in the areas of Dale and Pike counties included in Dist. 31. Jones edged Carnley in Dale by only 17 votes, but took 51.3 percent of the votes in Pike County compared to Carnley’s 37.6 percent.

Hammett will face Democrat Steve Hubbard in the general election.

Ivey’s opponent for the general election will have to be determined in a runoff, as Democrats gave 33.82 percent of the vote to Yolanda Rochelle Flowers and 32.5 percent to Malika Sanders Fortier.

In the race for the U.S. Senate seat being vacated with longtime Senator Richard Shelby stepping down, Katie Britt claimed the win in Covington County with 49.21 percent of the vote. Mike Durant finished second with 26.9 percent and Mo Brooks took 21.2 percent.

There will be a runoff for the seat as statewide, Britt claimed 44.7 percent statewide. She will face Brooks who claimed 29.1 percent. Durant finished with 23.3 percent.

There will be no runoff for the same seat for the Democrats. Will Boyd took 63.7 percent of the state, claiming the outright win over Brandaun Dean and Lanny Jackson.

Other results from Covington County’s primary election include the following (totals do not include statewide results):

Statewide Amendment 1: Related to an Alabama State Constitution amendment allowing the sale of general obligations bonds up to $85 million for the purposes of the improvement, renovation, equipping, acquisition, provision, construction, and maintenance of Alabama State Parks.

The only ballots remaining to count are provisional ballots, which will be counted Tuesday, May 31.