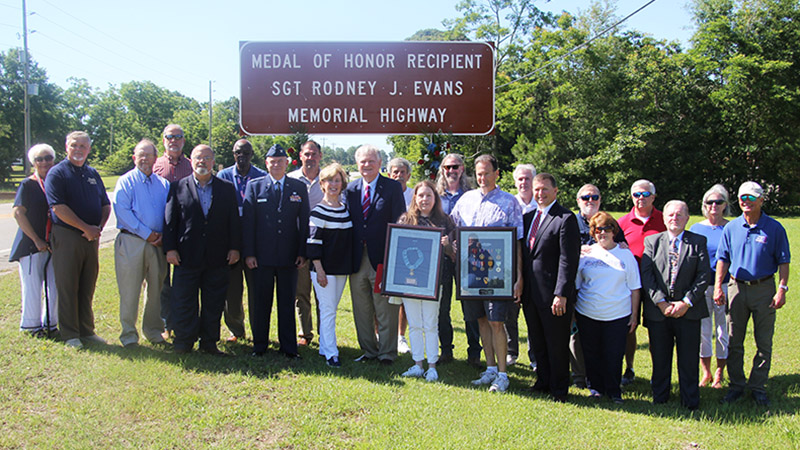 Signs were unveiled on Memorial Day renaming a portion of Hwy. 55, between Andalusia and Florala, as the Sgt. Rodney J. Evans Memorial Highway. Evans is the only Medal of Honor recipient from Covington County. Ceremonies were held to unveil two signs: one just north of Florala and another just south of Andalusia. Among those pictured at the Andalusia unveiling are Evans’ niece and her husband (holding the framed medals, including the Medal of Honor), Pam and Paul Stewart. Also attending the unveiling was Andalusia Mayor Earl Johnson, Florala Mayor Terry Holley, Covington County Commission Chairman Greg White, State Representative Mike Jones, Circuit Court Judge Ben Bowden, and members of the Covington Veterans Foundation. (PHOTO BY ROBERT BLANKENSHIP) 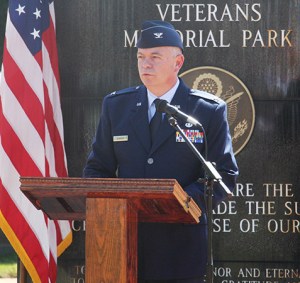 The first of the two unveilings was held on Hwy. 55, just north of Florala. The second was held just south of Andalusia, across from the Covington County track facility.

Among the attendees was Evans’ niece and her husband, Pam and Paul Stewart.

“This is one of the easiest things I ever had a part in. I was familiar with Rodney’s story, but it wasn’t until I worked on this project that I fully understood the courage he had, sacrificing his life for others,” Jones said.

Following the second ceremony on Hwy. 55, a Memorial Day ceremony was held at the Covington County Veterans Memorial Park with guest speaker, Circuit Judge Ben Bowden, Col. USAF Reserve and president of the Covington Veterans Foundation. His speech focused on the heroic actions of Sgt. Evans while also thanking those involved with renaming the portion of Hwy. 55 in his name.

“This was the culmination of an effort that begun over two years ago by the City of Florala, the City of Andalusia, and the Covington Veterans Foundation. We also want to thank Rep. Mike Jones and County Commission Chairman Greg White for their assistance in accomplishing this mission.

“The Covington Veterans Foundation has a motto that drives most of what we do: “A soldier never dies unless he is forgotten.” Memorializing Hwy. 55 in Sgt. Evans’ name is a lasting tribute to one of our own. May we never forget his love of his fellow man and country,” Bowden said.

Sgt. Evans died one day after his 21st birthday, on July 18, 1969, in Tay Ninh Province, South Vietnam. He was serving as a squad leader in a reconnaissance sweep through heavy vegetation to reconnoiter a strong enemy position. As the force approached a well-defined trail, the platoon scout warned that the trail was booby-trapped. Sgt. Evans led his squad on a route parallel to the trail. The force had started to move forward when a nearby squad was hit by the blast of a concealed mine. Looking to his right, Sgt. Evans saw a second enemy device. With complete disregard for his safety, he shouted a warning to his men, dived to the ground and crawled toward the mine. Just as he reached it, an enemy soldier detonated the explosive and Sgt. Evans absorbed the full impact with his body. His selfless action saved his comrades from probable death or injury and served as an inspiration to his entire unit. 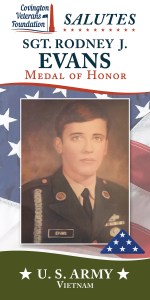 President Richard Nixon presented the award to his family at the White House on April 22, 1971, “for conspicuous gallantry and intrepidity in action at the risk of his life above and beyond the call of duty.”

Tragedy had struck Evans before his death. After his first tour in Vietnam he was stationed at Fort Rucker and due to financial constraints, his high school sweetheart and wife would drive to Fort Rucker to pick him up for weekends. On one of those trips to Fort Rucker in 1968, Barbara Evans was killed in a vehicle accident. After his wife’s death, Evans re-enlisted and volunteered for another tour in Vietnam.

Once back in Vietnam, Evans gained a reputation for taking great risks in order to protect the men under his command.

Two of Evans’ platoon members were asked to speak at the ceremony, but are currently unable to travel. They did provide letters which Bowden read during the ceremony.

Basil Clark wrote the following: “This honor being bestowed upon Rodney today is keeping him alive and hopefully some travelers of this stretch of road will look up Rodney J. Evans and discover who he was and why he is held in such high respect and realize that Rodney is a hero who gave the ultimate sacrifice — in the immortal words of President Lincoln: “that last full measure of devotion.”

Also preparing a letter was Staff Sgt. Gary DeRigne, who was with Sgt. Evans when he was killed.

“It was our squad’s turn to walk point, to be one of two lead elements for the company as we moved toward the enemy,” DeRigne wrote. “Normally, when our squad was walking company point, my buddy Mitchell Hamabata and I were the point element, with one of us walking in the lead and the other backing him up from close behind. That morning, knowing full well that we were very likely walking into an ambush Rod took the point himself, ordering Mitchell and me to fall back and walk behind him. He did that, I believe, because he was an excellent leader and because he had over 18 months of combat experience while Mitchell and I had only been in Vietnam for a short time.

“After the first barrage, Rod saw an undetonated mine directly to his front and threw himself onto it. The enemy blew the mine just as Rod fell on it. He died there on the jungle floor … Neither Mitchell, nor I, nor anyone else in our squad was hit because Rod had absorbed the full blast with his body.

“I clearly owe the last 53 years of my life to Rod’s heroic sacrifice in 1969, and even now, not a day goes by that I don’t think about him, and give thanks for what he did,” DeRigne said.

Others participating in the Memorial Day ceremony were: Andalusia Mayor Earl Johnson with the introduction of the speaker; Brian Foshee, leading in the Pledge of Allegiance; Hanna Cross performed “The Star Spangled Banner;” and the closing prayer was provided by Sammy Glover.