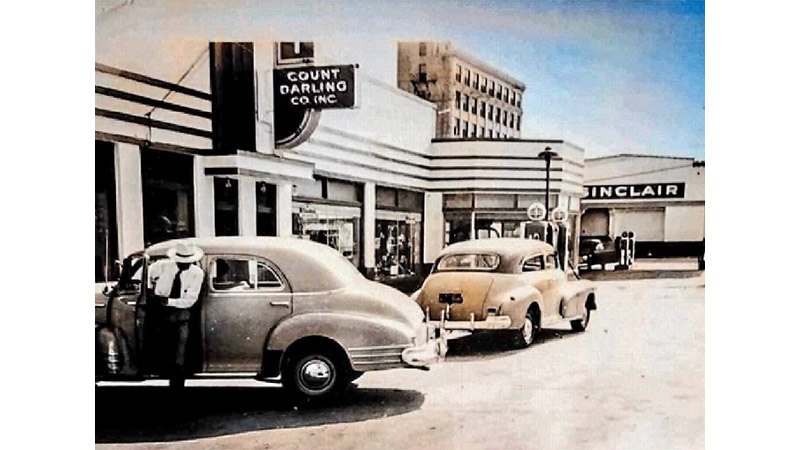 The Lower Alabama Arts Council presented a proposal to the Andalusia City Council Tuesday regarding the creation of a new museum that would provide more space for showcasing historic pieces, as well as being a hub for other community activities.

The proposed “Three Notch Hub” would be located at 208 E. Three Notch, which at one time was the home to Taylor Parts and prior to that County Darling, a Chevrolet dealership. Since then, the building has undergone changes, but according to LAAC President Kristy White, it could be renovated back to its art deco style, beginning with removing cedar siding that has been placed over the original exterior. There is even hope that an automobile turntable that used to showcase cars through the front window will be operational and incorporated into the hub’s exhibits.

The proposal involves a public-private partnership with the city. The city owns the building and would lease the property to the LAAC for the purpose of displaying collections and exhibits, providing educational programs, and providing additional space for classes and collections.

The proposal also calls for an Advisory Board to be established consisting of representatives from the City of Andalusia, LAAC, Covington Historical Society, Covington Veterans Foundation, and the Andalusia Area Chamber of Commerce.

The building at 208 E. Three Notch as it currently appears. Efforts will be made to return the building to its previous art deco style. (SUBMITTED PHOTO)

Those involved in the project are working with the Alabama Department of Archives and History to plan the museum.

“We are putting things in order so that, regardless of who is running any of the involved organizations, we will have a museum and interpretative center that will outlast all of us. We want to get to the place where there is something there for everyone,” White said.

She said through the partnership involving the city and other community organizations, there will be opportunities for grants to help fund the project. Additional funds could be provided through fundraising efforts.

“What we want to do is begin the process so the LAAC can move across the street into that building and begin doing the work. There is work we can be doing to move it forward. We’ve already begun the grant-writing process. By partnering together, it opens us up to the most potential for many different grants,” White said.

The LAAC would move its operations into the building as it has outgrown its current facility.

“We want to do move this building forward to get it to that museum annex that the city had intended when they purchased that building. We want to do the hard work though. We are asking that the city allow us to move in and work together as a partnership and begin the process of turning that building into a destination where people can stop, shop and look at art and exhibits. This will be a destination for our community and bring people to Andalusia,” she said.

One unique opportunity involves what longtime Andalusia residents know as “Miss Pinkie’s Well.” The well was originally on the property of Pinkie Benson. When Count Darling purchased the property for his Chevy dealership, it was sold on the promise that he would keep and maintain the well, which he did and it is still there today, located inside the building. That well would be incorporated into the proposed museum’s exhibits.

“There are so many opportunities that we can create by working together. It is very exciting to think about the possibilities,” White said.

White said the LAAC is ready to move forward with the project. The council indicated the city could begin the process of producing the proper agreements for the partnership to be signed by all the organizations involved. No official action was taken.