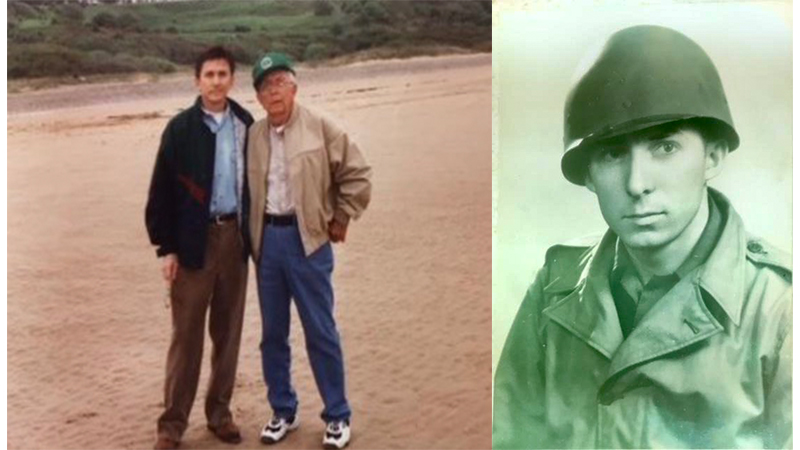 As father and son headed out from their hotel to the Normandy beaches, an older French lady stepped forward and asked in her broken English, “Have you been to Normandy before?” The older man replied, “Yes, a long time ago.” Recognizing that he was a veteran, she smiled and said, “Thank you for your service.”

A little later, as they walked along Omaha Beach, the father reminisced about coming ashore, some 53 years earlier, “It was several days after D-Day when we landed. I drove a weapons carrier onto the beach. The water came up to the floor boards.” The trip to Omaha Beach was the beginning of a trip Frank Morgan had promised his dad, Loy Ray Morgan. Over the next week or so, they were able to retrace the father’s route that began in June 1944. They traveled across France, Belgium and Germany, ending up in Beratzhausen, where he had been when Japan surrendered.

Loy Ray Morgan was born December 14, 1921 in Red Level, Covington County, Alabama. His parents were George and Allie Pierce Morgan. Loy Ray [as he was known] was one of six siblings. Two of his older brothers served in the Navy during WW II. George was a farmer and Loy Ray worked on the farm growing up. He attended Red Level School and was drafted after he graduated in 1942.

Loy Ray completed basic training at Fort Ord, California, and was assigned to the Headquarters Battery, 997th Field Artillery Battalion. They originally trained to fight in the desert of North Africa but that would change. The battalion sailed on the Isle de France from New York City on February 13, 1944 and arrived in Greenoch, Scotland, on February 23. They moved by troop train to the south of England for staging before landing at Omaha beach on June 27. Loy Ray recalled that the train came to a screeching halt in the middle of the night, and sat there, totally blacked out as bombs fell all around them.

Loy Ray recalled an interesting conversation while aboard an amphibious landing ship, awaiting the signal to go ashore, “I mentioned to a Merchant Marine officer that I was from Red Level, Alabama. He asked me if I knew Harry Huggins. I told him that ‘he lives about a mile or two down the road from me.’” Loy Ray couldn’t recall anymore of the conversation.

Once ashore at Omaha, they set up their artillery a mile or two inland. Loy Ray worked as a radio operator and occasionally as a driver for a reconnaissance Jeep crew/forward observer that provided fire direction for the howitzers. The battalion worked their way through France and entered Belgium on September 15, 1944. The forward observer crews were prime targets for German fighters who realized that the accuracy of American shelling was dependent upon their feedback to the gun crews.

As forward observers, they would observe a series of single rounds, then radio back to the guns to triangulate the target. Once the target was acquired, they would unleash 12 howitzers. Loy Ray recalled that as soon as their 1st Lieutenant called in the corrected fire information, “We would get the heck out of there.” It seemed that the Germans could pick up their radio signals and immediately fire on their position. When possible, they would run wires back to the howitzers to avoid the Germans picking up their radio signals.

Loy Ray recalled that he and an officer once had to bail out of a jeep while it was still moving when they were strafed by a German fighter. Later, his unit got some revenge when they shot down a German Messerschmitt fighter and captured the pilot.

By December, the 997th had made its way into Belgium and was near Bastogne [this was during the German counter-attack know as the Battle of the Bulge]. Loy Ray recalled that the weather was the coldest he’d ever seen. “I was afraid of getting frost bite so I put on goulashes over my boots.”

The 997th split into two groups as it made its way into Germany. They joined back up at Neustadt, Germany, on April 3, 1945. They continued through Gottingen, Groitzsch, Leipzig and to Mulsen St. Jacob on April 7, 1945, when Germany surrendered. After the surrender, they marched through the edge of Czechoslovakia and were in Beratzhausen, Germany, when Japan surrendered.

Loy Ray was part of a group that was sent to Bad Reichenhall [near Berchtesgaden] to set up camp for a post-war military government. While there, Loy Ray went to visit a local hospital. When he arrived, he said it looked like a large nursery. Loy Ray looked in on a large nursery area and a German nurse motioned for him to come in. He shook his head but the nurse insisted, so he went in. He recalled, “The place was full of babies. I only saw one mother, but there were rows and rows of babies.”

Most likely, the hospital was part of the German Lebensborn program. It was set up by Heinrich Himmler and the German SS to encourage what they considered, pure Aryan births. They asked German women of Aryan descent to breed with members of the SS to increase their “racist line.” They also kidnapped some German babies they considered Aryan and placed them all together to be raised by the State.

The 997th was making preparations for a move to the Pacific theater when the war ended. They left Germany on November 23, 1945 and arrived back in the States on December 20. Loy Ray was honorably discharged from Fort McPherson, Georgia, on December 20, 1945. He had received the American Service Medal, the WW II Victory Medal, European-African-Middle Eastern Service Medal with one Silver Star. He also received Battle Stars for Normandy, Northern France, the Ardennes, the Rhineland and Central Europe.

We know Loy Ray made it home by Christmas because his discharge was recorded at the Covington County Courthouse on December 21, 1945.

Loy Ray went to work as a truck driver for Southeastern Box Company in Andalusia. He married Martha Christine Martin on October, 22,1949. Christine owned and operated Wesley Day Care Center in Andalusia for many years. Loy Ray and Christine had three children, Michael Ray who died at birth in 1954, Stephanie Morgan Skipper who died in 1993, and Frank George Morgan who currently lives in Nashville, Tennessee.

Loy Ray was a life-long member and deacon of the River Falls Baptist Church in River Falls, Alabama. After a short illness related to complications from a broken hip, Loy Ray died on March 6, 2015. His funeral was held at his church and he was buried at River Falls Cemetery, less than five miles from where he was born. He was survived by his wife, Christine, his son, Frank [Lori] and four grandchildren. Christine Morgan died on December 12, 2020.

Frank Morgan said this about his dad, “Dad grew up in the depression, fought in a world war, raised a family, worked hard and enjoyed life…He never stopped moving…He mowed the lawn until he was 92…He loved his church and community…He loved purple martins and he loved his family.”

Sources: Wikipedia; recorded notes that Frank Morgan made when he returned to Normandy with his dad in 1997.