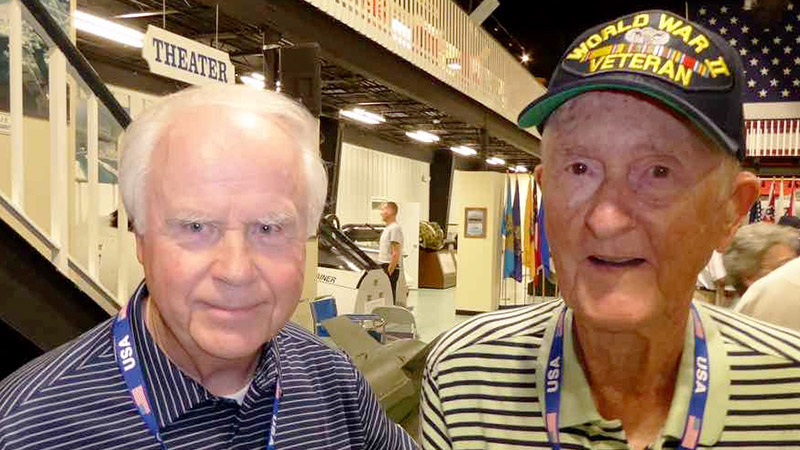 Merrill Sauls with the author at the 70th Anniversary of the End of WW II, at the Air Force Armament Museum, Eglin Air Force Base, August 2015. [Photo: John Vick]

The tall, gangly young soldier from South Alabama couldn’t believe he’d finally made it to Fort Benning, Georgia, the home of the paratroopers, only to be told he was three pounds too light to pass the physical. Merrill Sauls asked, “What do you mean ‘three pounds too light?’” The captain explained that there was a danger of getting your parachute entangled in the airplane’s tail structure if you didn’t weigh enough. Sauls went back to the barracks, ate a few bananas, and came back the next day.

The captain told him that he was still too light, but after a persuasive argument from Sauls, relented and passed him. After all, the Army needed paratroopers, and Sauls seemed hell-bent on jumping out of airplanes. Merrill Sauls received his paratrooper badge and found himself in the middle of the action a year later.

Wilson Merrill Sauls was born June 24, 1919, in the Rose Hill community of Covington County, Alabama. His parents were W. A. “Bud” and Susan Adams Sauls. The elder Sauls was a farmer and Merrill grew up doing all the chores on the farm including picking and hoeing cotton, stripping sugarcane and many other tough, physically demanding jobs. The hard life on the farm left Merrill with a desire “to do something else.”

In 1939, Merrill Sauls joined the 1st Battalion, 117th Field Artillery Unit of the Alabama National Guard in Andalusia, Alabama. In 1940, the unit was mobilized and sent to Camp Blanding, Florida. Sauls was trained as a “wireman,” whose job was to string out telephone wire for their communications systems. After Camp Blanding, the battalion took part in maneuvers in Mississippi, Louisiana and Texas. On December 7, 1941, the battalion was on maneuvers in Texas. Sauls recalled, “It was Sunday morning, around lunchtime and I was standing in line waiting to go into the mess hall. All hell broke loose – whistles, sirens…they told us to report to the supply room and draw ammunition…we took the trucks out into the woods and camouflaged them…it was sometime before we brought them back in…I didn’t get to eat till the next day.” 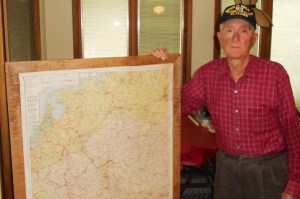 Merrill Sauls beside the cloth map he carried with him when he took part in “Operation Varsity.” He jumped behind German lines near Wesel, Germany. [Photo: Jim Lawrence]

While in Texas, Merrill Sauls decided that he wanted to join the paratroopers. After a preliminary physical, he was sent to Fort Benning, Georgia, where he “ran into the weight problem” discussed above. Once he was accepted, Sauls completed “jump school” at Fort Benning and advanced training at Camp McCall, North Carolina. Finally, he was sent to Fort Stewart, Georgia, where he was trained to operate a .50 caliber machine gun.

Sauls was assigned to the 464th Field Artillery Parachute Battalion and shipped overseas, arriving at Laharve, France in late 1944. Their first taste of combat took place in March 1945 when the battalion joined with the 17th Airborne Division as part of “Operation Varsity.” The operation consisted of some 541 transport-aircraft and more than 1,050 troop carriers towing 1,350 gliders. The goal of the operation was to aid the 21st Army Group in its amphibious assaults to breach the Rhine River. The dropping of many thousands of paratroopers behind German lines caught the Germans by surprise and the operation was considered a success.

Prime Minister Churchill, Field Marshal Montgomery, and Generals Eisenhower, Brereton and Ridgeway watched the procession of aircraft from the west bank of the Rhine. The line of aircraft stretched more than 200 miles across the sky and took some two and a half hours to pass over any given point. The armada was protected by more than 2,150 fighter planes and was said to be the largest single-day airdrop in history.

Sauls recalled the jump, “They told us that General Patton couldn’t get his tanks across the Rhine, so the paratroopers jumped behind the German lines to take the pressure off.”

Merrill Sauls successfully jumped over the town of Wesel, Germany, carrying, a carbine, three hand grenades, a small map, a compass and some C-rations. His machine gun was dropped about 75 yards away. After landing, Sauls crawled to his machine gun and joined with the other soldiers trying to keep the Germans at bay. Sauls recalled that some of his fellow paratroopers were not as lucky, “Some of them were caught in trees where the Germans shot them….That evening, we could hear them tanks. Were we glad to see them…They brought us some relief.”

On the third day, Sauls was wounded in the lower back. He hid out in a horse trough before he was taken to a field hospital tent for treatment. The tent was about 200 yards long with patients on cots down each side of the tent and another row down the middle. Sauls recalled, “It was packed and I spent the night on a gurney…There was one doctor and two nurses…when the Germans sprayed the tent with machine gun fire, they headed for the bunker and we were left defenseless.” After a couple of days, he was flown to France for treatment. 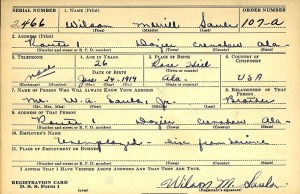 Sauls’ wounds were treated for 30 days but they had not healed before he was sent back into action. He recalled, “They told me they needed me…The wound wasn’t healed but they said the medics would change the bandages…So I went back to the front and stayed with the battalion…The wound never gave me any trouble…When the war ended, we were in Munich.”

After the war ended, Sauls worked as an MP [Military Police] on Jeep patrol duty in Munich. His unit was being readied for shipment to the Pacific theater when they were told that Japan had surrendered. They were taken back to France where they boarded a ship that took them back to the States. After their arrival home, they were moved to Fort McPherson, Georgia. Sauls had not accumulated enough points to be discharged. He recalled, “They wanted me to stay in and train paratroopers….I told them my parents were elderly and that I wanted to see about them.” Not long after that, the Army lowered the points for discharge and Sauls left the Army and headed home.

Back in Rose Hill, Merrill Sauls helped his brother build a small auto repair shop where Merrill worked as a mechanic He married Correne Cain on June 24, 1950. She was a school teacher from the Beulah community. A short time later, Merrill and Correne went to visit her sister who lived in Delaware. They decided to stay and Correne taught school and Merrill went to work for the U.S. Postal Service. He retired after 24 years and they moved to Opp, Alabama. Correne died on December 31, 2008.

The author first met Merrill Sauls in August 2015, when he was part of a group of WW II veterans that we took to the Air Force Armament Museum at Eglin Air Force Base to commemorate the 70th anniversary of the end of WW II. It was a great honor to be among so many of Covington County’s Greatest Generation. Merrill gave an extensive video interview to Robert Evers in January 2016. Merrill Sauls died December 28, 2016, at the age of 97. He was survived by a son, Tyson [Tonitta] Sauls and one grandson, Cole. His funeral was held on December 31 and he was buried at Peaceful Acres Memorial Gardens.