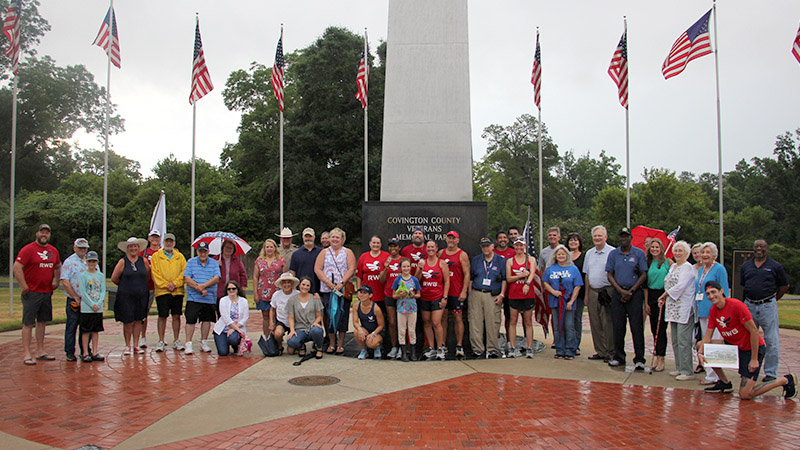 Members of Team Red White and Blue participating in the Old Glory Run to take the U.S. Flag from Washington D.C. to the World Games in Birmingham stopped in Andalusia Tuesday where they were welcomed by Andalusia Mayor Earl Johnson and Covington Veterans Foundation President John Vick. Also on hand for the event were other representatives of the city, the CVF and the Andalusia Area Chamber of Commerce. (PHOTO BY ROBERT BLANKENSHIP)

The U.S. Flag that will fly during Birmingham’s World Games this summer made a stop in Andalusia Tuesday afternoon as it travels 3,100 miles from Washington D.C. where it flew over the U.S Capitol.

The “Old Glory Relay” is a project of Team Red, White and Blue, which coordinates veterans and other volunteers to carry the flag along the trek. The flag was turned over to veterans on May 25 and will be carried into the World Games opening ceremony on July 7.

Team Red, White & Blue (Team RWB) is a nonprofit organization founded in 2010 that supports veterans through their health and wellness journeys by offering real-life and virtual opportunities to build a healthier lifestyle. Team RWB has more than 200,000 members spread across nearly 200 chapters and communities nationwide.

“We started doing the Old Glory Relay in 2014 as a way to enrich veterans lives. Our runners are members of Team RWB — veteran or civilian. All you have to do is sign up and next year the same opportunity will be available,” said Ryan Ruzek, an area director for Team RWB. 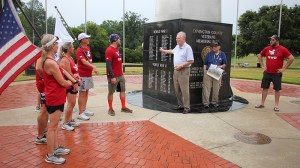 Lorenzo Garcia of Niceville, Florida and a veteran of the U.S. Air Force is the captain for the runners who took possession of the flag in Andalusia and will carried it to the state capitol in Montgomery. The group of volunteers stayed in Andalusia overnight before beginning their leg of the journey Wednesday morning.

“As a veteran we have something in us that we love Old Glory,” Garcia said. “I’m a third generation veteran and when you get an opportunity to represent veterans you want to do that. When the call comes you answer the call.”

Along with other members of his Team RWB group, Garcia was joined by his son, Nathan Mutton.

“It seemed like it would be a cool thing to do, especially getting to do it with my dad,” Mutton said.

During the flag exchange, Mayor Earl Johnson presented the members of Team RWB with a City of Andalusia pin and CVF President John Vick gave the group a copy of a print titled, “Hero Comes Home.”

“We thank you for selecting Andalusia to visit on your journey and we appreciate what you are doing,” Johnson said.

Vick added, “Thank you for coming through Andalusia, the most patriotic town in Alabama.”