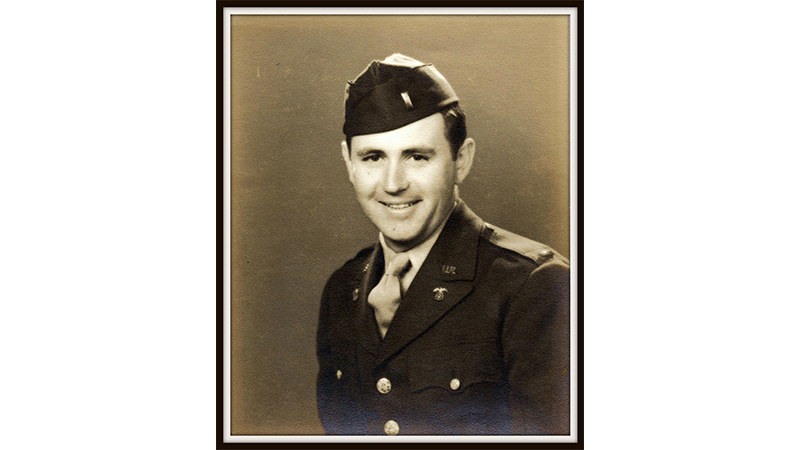 When asked what he remembered most about the war, Tubby Hall recalled passing through the Ohrdruf concentration camp, “We got there the morning after it had been liberated. General Patton told his commanders to have every soldier possible go see the camp…I was there 45 minutes to an hour, and it was not a pleasant sight or smell… The German camp commander was still lying dead in the prison yard with more than 100 stab wounds inflicted by the prisoners.”

Hall continued, “The poor, pitiful prisoners who were there looked like Russian Jews…They had no teeth and looked like they weighed only 65-75 pounds, but they had big smiles.” The U.S. infantry commander had the local townspeople brought in to carry the bodies of dead prisoners to a mass grave that had been dug by U.S. troops.

The Ohrdruf camp was part of the Buchenwald concentration camp and was the first Nazi concentration camp to be liberated. It was liberated by the 4th Armored Division and the 89th Infantry Division on April 4, 1945. General Dwight D. Eisenhower, Supreme Allied Commander in Europe, visited the camp with reporters on April 12. He said that he wanted to make sure that the Nazi atrocities were documented for the world to see.

Barnice Hayden “Tubby” Hall was born on March 8, 1921, in Pickens County, Alabama. His parents were Oren Lee and Robert Lee Hall. He always preferred his nickname, “Tubby,” because the name, Barnice, plagued him throughout high school, college and the Army. He said this about his nickname, “The name is only thing I ever held against my mother. I weighed 10 pounds when I was born and was called ‘Tubby’ from that time on. When you’ve been called ‘Tubby’ as long as I have, you get to like it.” 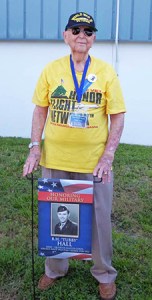 Tubby Hall graduated from Greene County High School in 1938. After graduation, he worked for the CCC {Civilian Conservation Corps] for about 15 months, working around the Moundville, Alabama, area, helping build the Mound State Park and Museum. Tubby recalled, “We lived in a barracks building on site and I started out earning $30 a month. We had to send $22 a month home to our parents.” His boss, James DeJarnette, encouraged him to enter the University of Alabama.

While studying at the University, Tubby met and married Erna Davis in 1942. About a year later in April 1943, he received his draft notice. He was sent to Camp Lee, Virginia, for basic training. While there, Tubby applied for Officer Candidate School [OCS], and was accepted. After commissioning as a Second Lieutenant, he remained as a training officer until he was sent overseas in December 1944.

Tubby recalled his arrival, “I went to England, then on to France where I was assigned to the Quartermaster Corps in the 3rd Army. I arrived at the front, the first of February 1945…We moved men, fuel, ammunition and other supplies to the front lines and brought back prisoners of war…It seemed like we went full speed night and day. The driver I replaced had been killed by strafing but I never felt in any danger.”

General Patton’s 3rd Army broke the German siege at Bastogne, Belgium, and pursued them into Germany. Patton was famous for the speed with which he moved his tanks and men which completely overwhelmed the German Army. Patton’s supply convoys were called The Red Ball Express. Tubby Hall was given command of one of the truck companies that kept General Patton’s 3rd Army on the march. Truck drivers like Tubby Hall became legendary for their ability to keep up with Patton.

In a conversation with the author, Tubby recalled one of the more unique ways that fuel was moved to the front: “I was near the front when I noticed a C-47 transport plane towing a glider, circling a field nearby. The glider was cut loose and landed in the open field. Immediately, German prisoners of war from the surrounding woods sprinted out to the glider and pulled it clear of the landing area. The C-47 landed right after that. Both the C-47 and the glider carried 55-gallon drums of fuel which was offloaded by the Germans.” Hall thought that was a pretty dangerous way to move fuel.

Hall and the other members of The Red Ball Express had followed Patton on through Germany, Czechoslovakia and into Austria by the time Germany surrendered on May 8, 1945. Tubby remained in Germany for about a year, supervising his truck company. The GI drivers were replaced by German prisoners of war, supervised by Polish guards. Hall recalled, “Every truck had a German driver and a Polish guard. We did a lot of hauling to help the civilian population and the displaced Jews, including hauling coal and other supplies.”

Hall drove trucks similar to these of the Red Ball Express. [PHOTO: WW2TALK.COM]

After a few months, the German prisoners of war were set free and the Polish guards sent home. Hall had been given command of Provisional Truck Company 1352 [the 9th Division] and recalled, “We hired the ex-prisoners as civilian workers and hardly missed a beat.” In May 1946, Tubby Hall was sent back to the States.

Tubby worked for Estes Construction Company in Mobile during the summer. Erna had worked in Mobile while Tubby was overseas and continued to work there. Tubby returned to the University of Alabama in the fall of 1946. After another summer of work, Tubby and Erna moved to Tuscaloosa. With the help of the GI Bill, Tubby graduated in 1948 with a degree in education.

Tubby was immediately hired by Opp City Schools as head baseball coach, assistant football and basketball coach. Tubby also managed the city pool during the summer. Things were going well until the Korean War began. Tubby had remained a member of the active reserve and was called to active duty in 1950. He trained in Wisconsin for several months and was then sent to Korea as a First Lieutenant in charge of a platoon in the Graves Registration department.

Hall recalled his Korean experience, “A lot of our men had been killed in the mountains and valleys and our job was to find, identify and return everybody.” After a year, he was returned back home to Opp in time to run the pool in the summer of 1952. A year later, Tubby Hall resigned his job with the school system and joined his friend, Henry Morgan, in the tire business. During the next 30 years, the two men developed a chain of 24 Auto-Sav stores in four southeastern states. Hall served as the company’s president and head of their retreading business.

Tubby Hall and his brother, Gray, had organized and helped manage a baseball team in the midst of the Depression. He maintained his love of baseball throughout his life. In 1953, Tubby organized Little League baseball in Opp. He remained active, coaching until his failing eyesight forced him to give it up 44 years later. He managed the Pirates in the Opp Little League for many years.

Tubby shared a story from one of the Pirate’s games when he was their manager.

During one of the games, one of Tubby’s players was injured. He walked over to check on him and noticed that one of the younger players had followed him and looked very concerned. After deciding that the player was not seriously injured, Tubby started back to the dugout. The youngster who had seemed so concerned pulled on his sleeve and said, “Mr. Hall, if he dies can I play in his place?”

Tubby Hall was a lifelong member of the Opp Lions Club, having joined in 1949. The author first met Tubby more than 40 years ago when he visited the Andalusia Lions Club as a make-up meeting. Tubby Hall became a founding member of the Alabama Sight Conservation Program and served as its president and longtime board member. Hall was instrumental in building the Callahan Eye Hospital as part of the University of Alabama at Birmingham hospital system.

Hall was a member of the Covington County School Board for more than 15 years. He loved Opp and its people. He served as president of the Opp Chamber of Commerce and was active in numerous civic endeavors. He was inducted into the Opp Chamber of Commerce Hall of Fame in 1996. Tubby Hall was a lifelong Methodist and taught Sunday School and sang in the choir more than 40 years. His wife, Erna, died in April 2010.

B.H. “Tubby” Hall died December 15, 2016. His funeral was held on December 19 at the Opp First United Methodist Church and he was buried at Peaceful Acres Memorial Gardens. Hall was survived by his daughters, Beth H. Shaw and Anne H. Landon, four grandchildren and several great-grandchildren.

Like so many members of The Greatest Generation, Tubby Hall’s character was molded by The Great Depression. That generation was eager to serve their country and asked little in return. They remained modest about their service and returned home to quietly build families and communities after the war. We may never see their like again.

Sources: Robert Evers video interview, January 2016; “All of us Fought the War – The University of Alabama and Its Men and Women in WW II,” by Delbert Reid; Wikipedia; Red Ball Express, history.net]