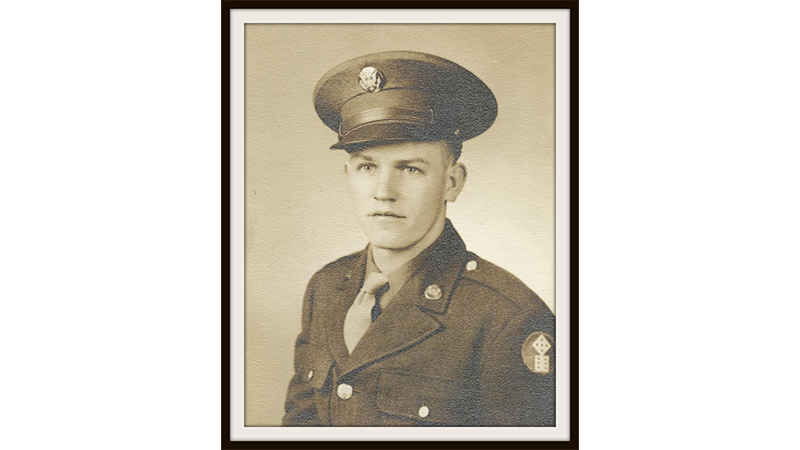 Hubert Sullivan’s battalion had been assigned to General Alan Simpson’s 9th U.S. Army, under the overall command of British General Bernard Montgomery. They found themselves near Aachen, Germany, in early 1945. Sullivan recalled, “We lost our first man at the Roer River. He was hit by a mortar while working with a group building a foot-bridge across the river…We were under a heavy mortar barrage…I became a champion fox-hole digger.”

Hubert T. Sullivan was born on February 14, 1924 in Castleberry, Conecuh County, Alabama. His parents were Essie Mixon and Joseph Clifton Sullivan. Joseph Sullivan operated a sawmill and gristmill on Panther Creek near Castleberry. Hubert graduated from Conecuh County High School in 1943 and was drafted a few months later.

Hubert Sullivan was inducted at Fort McClellan, Alabama, then shipped to Camp Blanding, Florida, for basic training. From there, he was sent to Camp McCoy, Wisconsin, where he underwent training as a combat engineer. His battalion was sent to Tennessee for maneuvers before being sent to New York City for overseas transit. They were loaded onboard the British troop carrier, HMS Large Bay, a converted animal carrier from WW I.

After their arrival in Liverpool, England, they drew additional equipment for the trip across the English Channel to France. Sullivan was assigned to the 251st Combat Engineer Construction Battalion and landed on Omaha Beach at Normandy in August 1944, just two months after D-Day. Shortly after their landing, they joined the American forces that were fighting to liberate Brest, France. 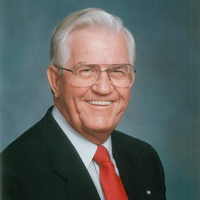 During the Battle of the Bulge, Sullivan’s unit was near the Elbe River building double-apron barb wire fences in an attempt to slow the German infantry advance. He recalled, “Germany in ‘44 was a hell-hole! The weather was cold, cold, cold!…We were trying to lay a bridge across the river. There was a gun emplacement and they flew a plane over to try to take it out…I was caught in the open and dove for the ground…A tracer hit the hard soil and spewed back between my fingers…I don’t know where the other five bullets went but they missed me.”

By February 1945, Sullivan and the engineers had worked their way to the Siegfried line near the Roer River. “We worked on clearing mines and building roads and bridges right behind or alongside the combat troops…Our first river crossing was over the Roer River in February 1945. The bridge had been blown and the Germans had blown dams upriver to flood the river to try to wash us away…We were building a pontoon bridge over the Roer River near Linnich, Germany, when I saw my first jet plane…It came flying in low and strafing us trying to stop our construction but it failed.”

After the Roer River crossing, Sullivan’s battalion made its way to the Rhine River near Dusseldorf. He recalled, “I took a group from the 1st Cavalry Division across the Rhine to bring back prisoners of war. We crossed in a M-2 Assault Boat. They came back that night and I challenged them…I was more afraid of getting killed by friendly fire than I was by the Germans…We made it back across and pulled into a small slough, right beneath an outpost set up by the 102nd Infantry Division. They didn’t fire on us. They had been well trained.”

From there, the battalion made its way past Hanover all the way to the Elbe River. Sullivan recalled, “We thought we were going to have to cross the Elbe River on the way to Berlin but it was already agreed by the President to let the Russians take it…At the Elbe River, there were German soldiers swimming from the German side to our side…It was reported that they wanted us to join them to fight the Russians. That didn’t happen, thank goodness.”

The 251st Combat Engineers were near Magdeburg, Germany, when Germany surrendered on May 8, 1945. Sullivan and the rest of his unit were sent to Rheims, France, to construct a tent city that became known as Camp Lucky Strike. The tents housed troops on their way back to the States or to the Pacific theater.

Sullivan didn’t have enough points for a discharge, so he was sent to the Northern Polytechnic Institute near London for a few months. On December 31, 1945, he was sent back to France with the 371st Construction Battalion. Sullivan left Europe in January and arrived at Camp Kilmer, New Jersey about 10 days later. He was then sent to Camp McPherson, Georgia, where he spent a week in the hospital with tonsillitis. He was discharged with the rate of Tech Sergeant in March 1946. He had earned the European-African-Middle Eastern Campaign Medal with two battle stars and the World War II Victory Medal. 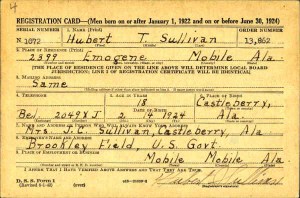 Draft registration card for Hubert T. Sullivan. He was drafted in 1943. [Photo: ancestry.com]

Sullivan attended the University of Alabama Center in Mobile for two years with the help of the GI Bill. He married his high school sweetheart, Mary Evelyn Pate, in August 1947. They moved to Tuscaloosa where he earned his B.S. degree in 1949 and his Master’s Degree in 1950.

The Sullivans moved to Anniston, Alabama, where Hubert served as assistant principal in the school system from 1950-55. They moved to Opp, Alabama, in 1955, where he served as principal of Opp High School until 1959. After that, he joined Opp and Micholas Mills where he served as human resources director until his retirement in 1992. A longtime friend of Sullivan, Judge Trippy McGuire, said, “He knew every employee by name.”

Hubert Sullivan was a Rotarian, having joined in 1960. Judge McGuire recalled, “He was an active Rotarian and an active member of the First Methodist Church. He always took an active interest in young people…He encouraged us and took pride in us, as though we were his own off-spring…Young people knew they had a big supporter in Hubert Sullivan.”

After his retirement, Sullivan became the founding president of Opp-Micholas Educational Foundation which awarded scholarships to 1,562 students between 1969 and 2007.

Sullivan served as president of the Opp-Micholas Credit Union for many years. He also served on the Opp Medical Board, the board of the Alabama Chamber of Commerce, the board of Blue Cross-Blue Shield of Alabama and many other charitable organizations.

Hubert Sullivan’s wife, Mary Evelyn, died in 1986. He would later marry Rebecca Sullivan [no relation], who survived him after his death in 2018.

Sources: Video interview of Hubert Sullivan by Robert Evers, January 2016; “All of us Fought the War – the University of Alabama and its Men and Women in World War II,” By Delbert Reed; ancestry.com.

Special thanks to Judge Trippy McGuire for his comments about his friend, Hubert Sullivan.