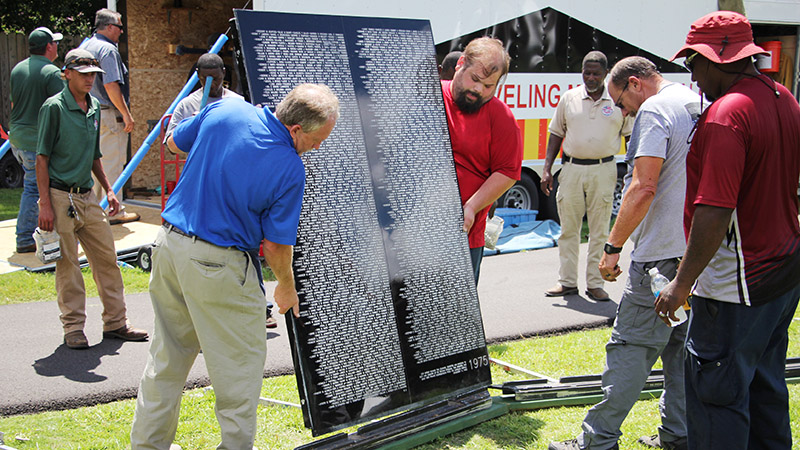 Members of the Vietnam Traveling Memorial Wall, along with City of Andalusia employees and community volunteers, began working on erecting the replica of the Washington D.C. Vietnam Memorial Wall at the Covington Veterans Memorial behind City Hall Wednesday. (PHOTO BY ROBERT BLANKENSHIP)

The Vietnam Traveling Memorial Wall arrived in Andalusia Wednesday morning with plans to open the exhibit to the community on Thursday. An official opening ceremony will be held at 5:15 p.m. Thursday followed by a free concert featuring Lee Greenwood on the grounds of Springdale Estate.

The traveling wall initially arrived at the Covington County Track Facility where it met with the Andalusia Police Department, the Wiregrass Patriot Guard Riders, and a helicopter provided by the Friends of Army Aviation in Ozark to be escorted to its final destination at the Covington Veterans Memorial behind Andalusia City Hall.

Once on the grounds, those involved with the wall received help from employees with the City of Andalusia and other community volunteers to begin erecting the structure, which was completed Wednesday afternoon.

John “Top” Kammerer, a Desert Storm veteran and Wiregrass Patriot Guard Riders Captain, said it was an honor to provide the escort for the memorial, which included at least 50 bikes. 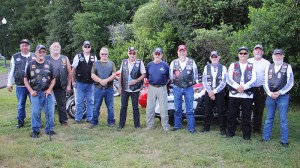 A few of the Patriot Guard Riders who participated in Wednesday’s escort. (PHOTO BY ROBERT BLANKENSHIP)

“A mission request came into us last week, asking if we would provide a motorcycle escort. We have riders from across the state and northwest Florida here. Today’s is what we call a ‘HOTH’ mission — Help on the Homefront,” Kammerer said.

The Riders are primarily focused on escorts for funerals for fallen warriors and first responders. “This is different from many of our missions because it is a happy time. So many other times it is more of a solemn experience.”

Kammerer said helping escort the wall into Andalusia has a special meaning for many in the group, who themselves are Vietnam veterans.

“It is a step in healing for so many of them. Every day, 22 of our brothers and sisters are killing themselves every day in this country because they can’t get the help they need,” he said.

The Patriot Guard Riders are based out of Enterprise.

Also participating in the escort was a helicopter escort provided by the Friends of Army Aviation. On Friday and Saturday, the group will offer 8-10 minute rides in a Vietnam-era UH-1H “Huey” helicopter. There is a cost of $70 per rider and will be located at Cooper Park’s Packer Field at 404 Snowden Drive.

An opening ceremony will be held at 5:15 p.m. on Thursday. From that time until 5 p.m. on Sunday, July 31, the wall will be available to visitors 24 hours a day. The wall will be staffed by volunteers throughout the day and night hours to assist.

Thursday’s opening ceremony will include recognition of Gold Star families.

Following Wednesday’s opening ceremony, a special July Jamz event featuring a free concert by award-winning country music artist Lee Greenwood. The Three Notch Ramblers will be the opening act featuring music from the Vietnam era. After the concert, there will be a fireworks display.

Prior to the closing ceremony on Sunday, beginning at 2:30 p.m., Jimmie W. Spencer, Command Sgt. Mjr. (Ret.), will be the guest speaker at a commemoration event in the Andalusia City Hall auditorium.

To assist with parking, the Covington County Area Transit Authority will be running a continuous route from the Andalusia court square to the parking lot of city hall. Pick up and drop off will be at the corner by Clark Theater. At city hall, golf carts will be available to those who need further assistance.

The gates to the concert at Springdale will open at 5:30 p.m. with the opening act to begin at 6 p.m.