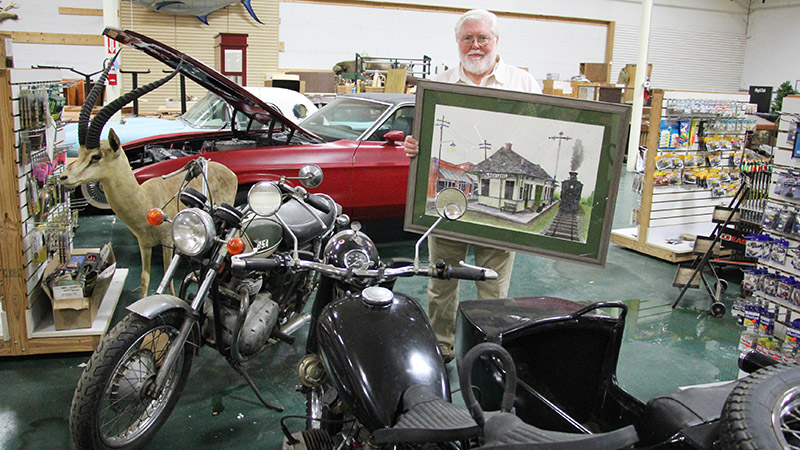 John Tisdale with some of the items he has collected over the years that gained the attention of the “American Pickers.” An episode featuring Tisdale will air on Saturday, 8 p.m., on the History Channel. (PHOTO BY ROBERT BLANKENSHIP)

A lifelong passion for collecting things has landed a local a spot on the television show, “American Pickers.”

John Tisdale’s collection of vehicles, motorcyles, train memorablia and all sorts of antiques will be featured on the History Channel’s longrunning show this Saturday at 8 p.m.

Tisdale grew up in Andalusia before moving on to Auburn University where he studied engineering. He worked several jobs in the years following graduating, but returned to Andalusia in 1985 when he became the manager of PowerSouth’s Gantt plant. Throughout those years, he continued a passion for collecting that started when he was a young boy traveling with his father who was an Andalusia veterinarian and professional rodeo cowboy.

“A lot of times when summer came and school was out, we would all take a vacation out west. I started traveling a lot of those states with him and that was my earliest exposure to collecting things. I picked up stuff in places like Cheyenne, Wyoming; Deadwood, South Dakota; and all over Texas. The main thing I started with was collecting music albums and things like that, which I still do. I got into things as I traveled,” Tisdale said.

Throughout his work life, Tisdale always maintained his side interests, which included real estate and opening a sporting goods store and antiques shop. During his time working in Birmingham, he purchased real estate and later purchased Union Station in Montgomery, which led to one of his biggest purchases of antiques.

“I always had sideline interests, which included antiques. I always bought and sold antique motorcylces and cars. When I owned Union Station, a good friend of mine had a museum at the west end of Union Station. He had quite the collection of old train items. He educated me on all those things. He had a stroke and became incapacitated, which led to me purchasing his collection. That was one of my very first big collections,” he said.

As the owner of Sporting Lifestyles in Andalusia, he became interested in taxidermy and purchased those items to display in his store. He has closed his sporting goods store and an antique store, deciding they were taking too much time to manage during his retirement years.

“I will buy and sell anything I believe there is a margin,” he said.

His collection first caught the eye of the American Pickers about three years ago.

“Within the last year to year and a half we talked more and more. About six months ago they seemed to make up their minds that they wanted to come to Andalusia,” Tisdale said.

At first, they had told Tisdale they would send someone ahead to view his collection to ensure the show would be interested in his items.

“They asked that I send them photographs and they called me back and said they really didn’t need to send that man down, that they could tell by the photographs that I had items they were interested in looking at.”

In February, stars of the show, including Mike Wolfe, his brother, Robbie Wolfe, and “Jersey John” Szalay came to Andalusia to sift through Tisdale’s collection, ultimately purchasing several items, which will likely be revealed during the broadcast.

“It was a great experience. They are very real, not just for-tv-type people. They are also very intelligent. They could look at my items and tell me more about it than I even knew. With the filming crew, it was quite the production,” Tisdale said. “I don’t think this will start my movie career, but it was a very interesting and fun experience. mostly because they were so pleasant and genuine.”