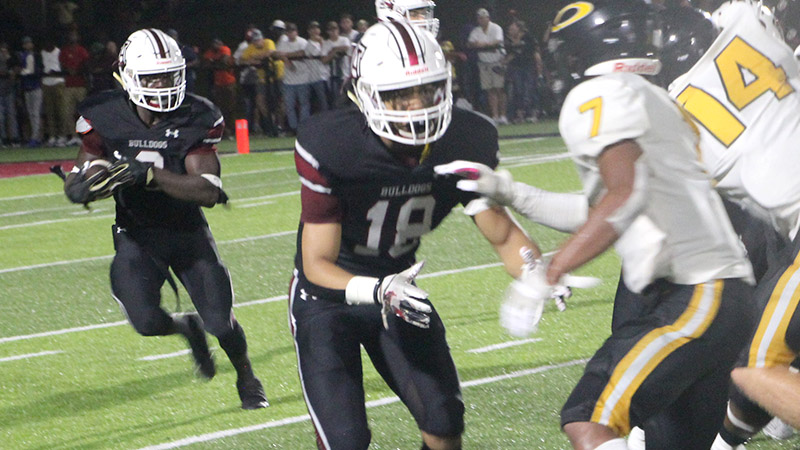 Andalusia's Darion Crittenden, left, had a big night on the ground with 158 yards for the Bulldogs in a 35-7 win over the Opp Bobcats. (PHOTO BY ZACK MAIO)

It was three years since the Andalusia Bulldogs and Opp Bobcats met each other on the gridiron, but the teams got their chance in front of a huge crowd in this season’s opener on Thursday with the Bulldogs coming out on top, 35-7.

It was big night for Andalusia senior running back Darion Crittenden who compiled 158 rushing yards on 12 carries.

A couple of AHS juniors also shined in the game. Quarterback Jack Lathrop went 10-of-16 passing for 215 yards and four touchdowns while J’Marion Burnett recorded 80 yards and a touchdown on 14 carries.

Kaden Denson was the recipient of about half the passing yardage for Andalusia, catching two balls for 110 yards and two touchdowns. Ty Cameron Jackson caught five passes for 72 yards and a touchdown. Dylan Jackson also caught a 13-yard pass for a touchdown. 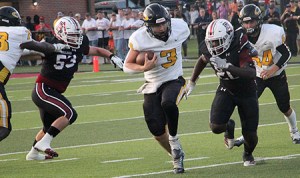 Kam Weaver led the defense with seven tackles, including 1.5 sacks and 2.5 tackles for loss. Zade Newton recorded 3.5 tackles while Riley Tucker, Tristan Pitts and Kaden Denson each had sacks for the Bulldogs.

Leading the way for Opp, quarterback Gray Jennings went 8-of-21 for 106 yards and touchdown while senior runningback Terry Davis notched 42 yards on the ground.

Dylan Reisnour was the leading receiver for Opp, hauling in two passes for 54 yards and a touchdown.

The Bobcats’ leading defender was Nelson Hall who finished with six solo tackles including two for losses.

In all, Andalusia outpaced Opp 479-122 in total yardage. The Bulldog defense held Opp to only 16 yards on the ground.

AHS Head Coach Trent Taylor said his team played well in the victory, but there is still work to be done.

“We still have a lot of things to clean up. We have a tough schedule ahead and a tough game next week that we start preparing for. We’ll enjoy this win for a few days and get back to work on Monday,” Taylor said.

The Bulldogs got off to a fast start. Tevin Sigers took the opening kickoff and returned it 23 yards to the Andalusia 30-yard line. On the first play from scrimmage of the new season, junior quarterback Jack Lathrop found Kaden Denson open who took the ball 70 yards into the end zone. Kolya Barton’s point-after attempt was good giving Andalusia a 7-0 lead.

After forcing an Andalusia punt on a three-and-out, Opp took control at their own 27. On second down, OHS senior quarterback Gray Jennings hit Dylan Reisnour for a gain of 14 and a fresh set of downs at the 28-yard line. On second down, the Andalusia defense got into the backfield as Joshua Riley and Kameron Weaver combined on a sack for a 6-yard loss, leading to an Opp punt with 5:20 to go in the first quarter.

Taking control at their own 36-yard line, the Bulldogs gained seven yards on consecutive runs by junior running back J’Marion Burnette. On the third handoff to Burnette, he scampered 12 yards to the Bobcat 45 and gained another five on 1-and-10. Then, the Bulldogs went to the air as Lathrop once again found Denson, this time for a 40-yard touchdown. A two-point conversion attempt failed, but Andalusia held a 13-0 lead with 2:13 to go in the quarter.

Opp took control at the 20 after a short return by senior Terry Davis. On first down, Davis took the handoff for a 9-yard gain and followed that up with a 15-yard run to the Opp 44-yard line. But, disaster struck the Bobcats as a snap was mishandled and Andalusia senior Dorian Crittenden was there for the recovery at the Opp 30-yard line.

Andalusia wasted no time as they once again went to the air as Lathrop connected with senior Ty Cameron Jackson for a touchdown. Barton’s PAT was good, lifting the Bulldogs to a 20-0 lead at the end of the first quarter.

The Opp defense made a stand to open the second, holding Andalusia on a 4th-and-6 to take control at their own 47-yard line. The Bobcats crossed midfield courtesy of a personal foul penalty. On what was almost a busted play, Jennings found Zeb Green for a big 16-yard gain to the Andalusia 20. Another penalty — this time an unsportsmanlike conduct penalty — would put Opp in position to score at the 7-yard line. But, from there, the Andalusia defense held on four downs to take control at their own 2-yard line.

Andalusia would drive to the Opp 35-yard line before the clock expired on the first half with the Bulldogs holding a 20-0 lead.

Early in the third, following a sack by Bulldog sophomore Riley Tucker, Andalusia added a couple of points with safety on an Opp punt attempt, increasing the lead to 22-0.

Opp would hold Andalusia on a fourth-down try on the next possession and take possession for their first scoring drive of the game. The Bobcats crossed into Andalusia territory after a 24-yard pass from Jennings to Davis. The Bulldog defense stiffened, but on 4th-and-15 from the Bulldog 41, Jennings found Reisnour who took the ball the distance. Senior Prent Huggins hit the extra point to make the score 22-7.

Andalusia ended the third quarter with a big 75-yard run by Crittenden, setting up a 22-yard touchdown run by Burnette early in the fourth quarter. Andalusia led 29-7 after Barton’s point-after kick.

The Bulldogs would all but wrap up the game when they took possession with just over 10 minutes to go and proceeded on a 9-play, almost 6-minute drive, capped by Lathrop’s fourth touchdown pass of the night as Dylan Jackson took into the end zone from 13-yards out. The point-after was no good, but Andalusia went on to hold its 35-7 lead for the remainder of the contest.

Andalusia (1-0) will travel next week to Milton, Florida while Opp (0-1) goes to New Brockton for the Bobcats’ first region game of the season.