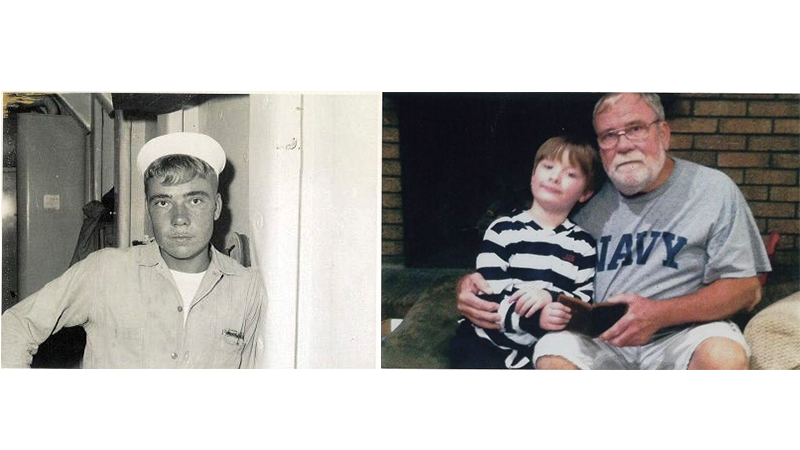 It seemed like half the ship’s crew of the USS Hornet were gathered on the flight deck, trying to catch a glimpse of the Apollo 11 capsule as it splashed down in the Pacific. It was nearly six o’clock in the morning [local time] on July 24, 1969, that Apollo 11 ended its historical mission to take men to the moon and return them to earth. Captain Carl Seiberlich, the Hornet’s commanding officer, had dubbed the recovery mission, operation “Hornet Plus 3,” to signify the ship’s safe recovery of the three Apollo11 astronauts.

Jack Sansom had made his way to the flight deck hoping to see the capsule land. He could barely make out the fiery capsule as it entered earth’s atmosphere. The overcast kept him from seeing the three beautiful 83-foot diameter, orange and white parachutes that deployed at 10,000 feet. The original landing-sight had been altered some 250 miles due to inclement weather and the Hornet had been steaming all night to get to the new position. The Hornet had already sent helicopters ahead that were standing by on station. The Hornet finally made visual contact with the capsule some 13 miles away.

Jack David Sansom was born on November 7, 1948 in Geneva, Alabama. His parents were Doris McGraw and Bertis Sansom and Jack was the 3rd of 11 children. He attended Samson High School through the 11th grade and went to work at Opp Micholas Mills in Opp, Alabama.

Jack joined the Navy in early 1968 and was sent to San Diego, California, for basic training. After basic, he was deployed to Saigon, Vietnam, on May 31, 1968, to await the arrival of his ship, the USS Jamestown [AGTR-3]. The Jamestown was a technical research ship whose mission was to “conduct technical research operations in support of U.S. Navy electronic research projects including electromagnetic propagation studies and advanced communication systems such as satellite communications.” In reality, the Jamestown was a “cold war spy ship.” 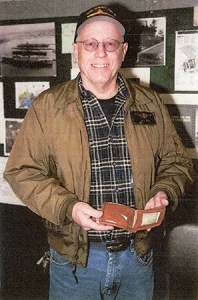 Jack recalled an incident in Saigon before he reported to the Jamestown, “Four of us were walking from our run-down hotel to the chow hall, about 400 yards away. About 60 yards ahead of us, we could see a girl on a motorized scooter talking to three servicemen. Suddenly she threw a hand grenade into the group and sped away. Fortunately, a nearby bunker guard saw what happened and killed the girl before she could escape. All three of the GIs were killed. A somber Jack Sansom recalled, “I had only been there two days. This is not good.”

Jack also remembered several incidents that happened after boarding the Jamestown, “In September 1968, we were anchored off Bien Hoa. Several of us went ashore to get supplies when we began taking fire from the surrounding jungle. Navy Seals were there to protect us and they quickly took out three snipers. We hurriedly picked up our supplies and headed back to the ship.”

The Jamestown was offshore from Da Nang conducting spying operations in November 1968.

Jack recalled, “During one night, we were at “darken ship” conditions [meaning no lights were visible on the ship] when our ship came under fire. The battleship USS New Jersey was there for our protections and she opened up with her 16-inch guns. You could see the explosions and some of the enemy running away. The next morning, I took a picture of an enemy body, floating near the ship.”

The Jamestown was anchored off Cam Ranh Bay in January 1969 when Jack and several others went ashore to pick up supplies. “While we were loading supplies from the base, we came under fire from enemy snipers. The Navy Seals were there protecting us and killed at least three of them. I’m thinking this is a scary place!”

Jack Sansom left Vietnam in June 1969. Before he left, he was asked to extend for six months. Jack replied, “Thanks but no thanks.” He was able to come home for two weeks leave before reporting to his next assignment aboard the USS Hornet [CVS-12] at Long Beach, California.

The Hornet had the honor of being designated the recovery ship for Apollo 11, the first flight to put men on the moon and return them to earth. In a speech before Congress on May 25, 1961, President John F. Kennedy had challenged the country to put men on the moon and bring them back before the end of the decade. Now, the Hornet and its crew were helping fulfill that challenge, some eight years and two months later.

The recovery of the Apollo 11 capsule on July 24, 1969, was a carefully rehearsed and choreographed operation. The helicopters carried swimmers from the Navy’s Underwater Demolition Team [UDT] who wore scuba gear. They were to make sure the capsule was upright, place a floating collar around it and secure a cable from the helicopter for transport back to the Hornet. Their job was made more complicated by NASA’s concern over possible contamination by lunar microorganisms. After decontamination procedures, the three astronauts were brought onboard a helicopter and flown back to the Hornet.

Jack Sansom watched as the helicopter gently landed on the flight deck carrying the three astronauts. Above him on the flag bridge were several dignitaries including President Richard M. Nixon, who had been brought aboard by helicopter around five o’clock that morning. The astronauts exited the helicopter wearing biological isolations suits and were quickly whisked below to the hanger deck and into the MQF [the biological isolation module]. They would remain in the MQF until it was off loaded at Honolulu and flown to Houston’s NASA headquarters.

Jack listened as President Nixon welcomed the astronauts back home and complemented the Hornet’s crew on the successful operation. After his speech, the President broke away from his security detail to shake hands with some of the Hornet’s crew. Jack was one of those who were able shake the hand of the President. Shortly after the President ‘s helicopter departed the Hornet, the crew began lifting the Apollo capsule onto the number three elevator which took it to the hanger deck. 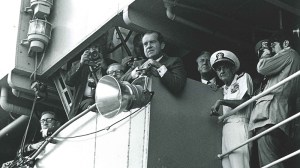 President Richard M. Nixon on the flag bridge of the USS Hornet, awaiting the arrival of the Apollo 11 astronauts. Jack Sansom was on the flight deck below. [Photo:NASA]

Jack Sansom remained aboard the Hornet until October 1969 when he was discharged. He had earned the Defense Service Medal, the Vietnam Service Medal with two bronze stars and the Vietnam Campaign Medal with device. After receiving his discharge papers and his pay, Jack felt so relieved that he threw his billfold onto the ductwork above the passageway outside the ship’s Disbursing Office. The billfold held his military ID along with other papers. His pay and discharge papers were in his pocket. He had no driver’s license until he was 20 years old. The billfold remained where Jack threw it until 43 years later when it was found during the Hornet’s conversion to a museum ship in Alameda, California. Workmen were pulling cable on the Hornet in 2012 when they found the billfold. Using Jack’s ID card, the located him and asked a few questions to verify that he was the owner. Jack received the billfold along with the following letter in January 2012:

From one sailor to another it is with great honor that I return your wallet that you lost in 1969 and we found 43 years later in 2012. It was just by chance that our engineers were running a computer cable over a vent in the overhead and your wallet popped out. I have included a couple of pictures of me in the area on the 2nd deck near the Disbursing Office in which we found the wallet. If you are interested in donating the wallet to the USS Hornet Museum, please contact me at any time. There is a great story behind it and with your permission, we would like to share it.

Jack had his picture made with his grandson, Jack Benjamin, and returned the wallet to the Hornet Museum where it resides today.

After Jack’s return home, he married Sandra Smith on July 2, 1971. They have one daughter, Lori Sansom Foreman. Jack’s work history after he returned home has a close involvement with the author. The author was the General Manager of Dixon Plywood in River Falls.

Jack worked briefly in the plywood press area of the mill before attending McArthur Trade School in Opp. At that time, he switched jobs at the plywood mill, running a chipper on the swing shift at night while attending McArthur during the day. After Jack received his Electrician’s Certificate, he joined the maintenance department at the plywood mill, working the day shift and attending LBW Junior College [now LBW Community College] at night until he received his associate degree. Even with the help of the GI bill, he worked while studying to get his degree.

Jack worked at Dixon Plywood until 1979 when he went to work for Louisiana-Pacific at their sawmill in Crestview, Florida. He worked for L-P for 22 years as an electrician. In 2005, Jack took a job as an electrician at T. R. Miller Lumber Company at Brewton, Alabama. He retired in 2011 but still occasionally works small jobs for businesses. He and Sandra make their home on Brooklyn Road in Andalusia.

The author would like to thank Jack’s daughter, Lori Sansom Foreman, for reuniting two old friends.