Pleasant Home off to fast start with 41-6 victory over A.L. Johnson 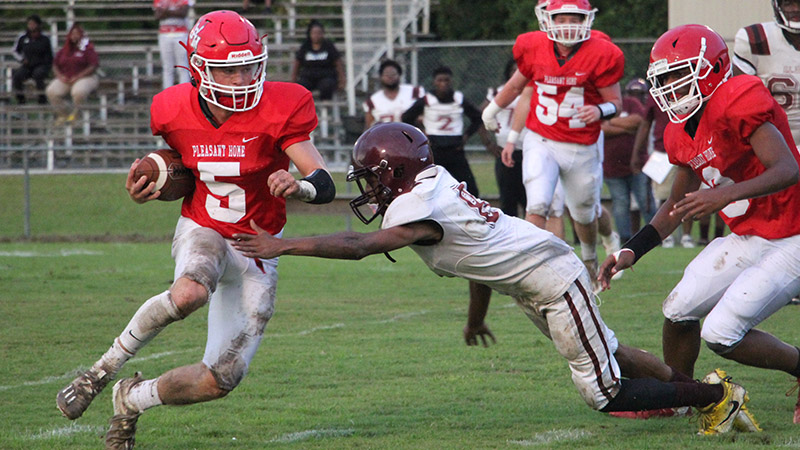 Pleasant Home’s Ty Clark, left, runs the ball for the Eagles and looks to avoid a tackle from an A.L. Johnson defender. (PHOTO BY ZACK MAIO)

The Pleasant Home Eagles got the 2022 season off to a fast start defeating the visiting the A.L. Johnson Eagles, 41-6.

The PHS Eagles defense came away with two fumble recoveries.

Pleasant Home was led by a strong running attack, accumulating 199 yards of their total 277 total yards on the ground. Eighth grader Jacob Bryan finished the night with 126 yards on 11 carries with two touchdowns while senior quarterback Mason Anderson notched 87 yards on 14 carries and also reached the end zone twice.

Mason went 4-for-8 passing for 78 yards, including a 16-yard touchdown to senior Ty Clark.

Luke Gatewood was the leading receiver, hauling in two passes for 55 yards.

“I’m very happy with getting off to a good note and winning if you can help it,” PHS Head Coach Cody Sellers said. “Overall, we did see a lot of things we need to work on to get better for our next game. I’m very proud of the attitude and effort, but the execution still needs some work. We know we have a tough opponent in Red Level and have a lot to get ready for that game in two weeks.”

Pleasant Home scored on their second possession of the game. After consecutive runs by Anderson for a total of 30 yards, the quarterback then went to the air and found Clark for a 16-yard touchdown. A two-point conversion attempt was no good.

The PHS Eagles added another touchdown midway through the first quarter when Bryan scored from 14 yards out. This time, the two-point attempt was good, making the score 14-0.

Three plays into the second quarter, Clark took the ball 18 yards into the end zone for Pleasant Home. A failed two-pointer made the score 20-0.

A.L. Johnson fumbled the kickoff and Luke Gatewood recovered for Pleasant Home, which would capitalize with a five-play drive capped with a 1-yard burst by Bryan into the end zone. The two-point conversion attempt was good, lifting Pleasant Home to a 28-0 halftime lead.

The home Eagles would score again midway through the third after a 47-yard drive that ended with a 1-yard run by Anderson.

Pleasant Home would increase its lead to 41-0 later in the third when Anderson took the ball on a 13-yard run.

A.L. Johnson finally broke through the Pleasant Home defense in the final seconds of the third, making the score 41-6.

The game was played with a running clock in the fourth quarter.

Pleasant Home (1-0) will have a bye week next Friday night before returning to play on Sept. 2 when they travel to in-county and region opponent Red Level.