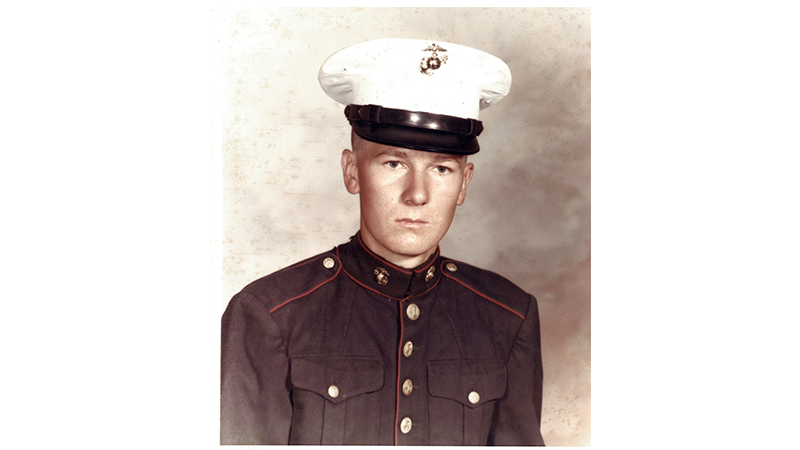 With the recent visit of the Vietnam Traveling Memorial Wall, Andalusia was host to more than 5,000 visitors who came to see it. The Wall was displayed just behind the Covington County Veterans Memorial Park. On any given day, there were crowds who came to see the wall but who also saw our Veterans Park for the first time. Many remarked that it was the most beautiful veteran’s memorial they had seen. That caused the author to think back about how the veterans park came to be.

Andalusia Mayor Earl Johnson had wanted to build a veteran’s park since he was first elected. Through coincidence or some divine guidance, Kenneth Johnson approached the Mayor and offered to chair a committee to get it done. Kenneth Johnson and the Mayor co-chaired a committee that was responsible for coming up with a design and raising the money to have it built.

Kenneth Gravlee Johnson was born in Aliceville, Alabama, in 1948. He said that he graduated from high school one day and joined the Marine Corps the next. Like all Marines, he was sent to Parris Island at Camp Lejeune, North Carolina, for basic training. After basic, he was sent to Marine Corps Infantry School at Camp Geiger located near Camp Pendleton, California.

Kenneth’s first tour in Vietnam began in 1966. He was assigned to 1st Platoon, “Echo” Company,” 2nd Battalion, 3rd Marine Division. Kenneth was a squad leader and also a M60 machine gunner. He didn’t talk much about his first tour.

On his second tour in Vietnam, Kenneth was assigned to “Echo Company” but this time with the 4th Marine Division. On September 19, 1967, Kenneth was wounded near Quang Tri. He received severe wounds of the arms, leg and back and would later receive the Purple Heart.

Of his return home, Kenneth recalled, “I was more nervous than when I was in a foxhole. I was a stranger in a strange, hostile and ungrateful land. Before leaving Vietnam, we were told to ‘lay low’ and remain quiet…The silence that greeted us left open wounds and delayed our healing far longer than any other returning war veterans – just one more distinction of the Vietnam War.”

In September 1971, Kenneth married his high school sweetheart, Helen Griffith and enrolled at Auburn University under the GI Bill. He earned a degree in Biological Science/Wildlife Management in 1974.

After he received his degree, Kenneth and Helen moved to Andalusia, Alabama, where he took the position of Wildlife Biologist with the Alabama Department of Fish and Game. Kenneth held that position for the next 36 years. He and Helen had three sons, Ken Jr., Griff and Neal. They also had five grandchildren.

Kenneth’s Vietnam experiences were always present in his mind and there were many lingering questions. One day, he purchased a book, “The Proud Bastards,” by E. Michael Holmes. Helen recalled, “Ken was reading the book one night as I left the room to go to bed. The next morning when I got up, Ken was where I left him. He had read and finished the book. It was about ‘Echo Company’, Ken’s company, and the author had given Ken and his buddies new names.”

Sometime later, Ken located the author and they were able to spend many long hours reminiscing. From that book and the exchanging of addresses, many friendships were renewed. One of the men, Warren Howie, lived in Wisconsin with his wife Bonnie. The two families visited many times at each other’s homes. Helen recalled, “On one of Warren’s visits to Andalusia, the subject of a local veteran’s monument came up. Ken got very interested in the idea.” Kenneth approached Mayor Johnson about a veteran’s park and offered to help with the project. The Mayor gave his blessing and they co-chaired the committee that was formed. 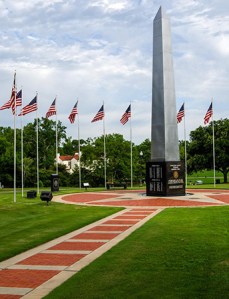 Dale Fritz, a landscape architect from Birmingham, designed the park layout with an obelisk and granite base in the center. Wyley Ward, a local professional engineer, designed the 36-foot tall obelisk and its granite base to withstand hurricane force winds. William Merrill, a local welder and Vietnam veteran, constructed the obelisk in his welding shop. It was made of stainless steel.

Merrill was working on the obelisk when Hurricane Ivan came through in 2004. Merrill said later, that during the storm, he had crawled inside the obelisk “because it was the safest place to be.” Merrill’s construction of the obelisk was such an ambitious project that it was featured in a national magazine, The Welding Journal in 2005.

To pay for the monument, commemorative bricks honoring veterans were sold and placed around the Veterans Memorial. The completed monument and veteran’s park were dedicated on Veterans Day, November 11, 2004.

On February 14, 2017, Kenneth Gravlee Johnson lost his battle with cancer. He was buried at Andalusia Memorial Cemetery with full military honors. Kenneth Johnson was the first recipient of the Covington Veterans Foundation’s Distinguished Service Award in 2019. Mrs. Helen Johnson accepted the award on behalf of her late husband.

The Covington County Veterans Memorial Park is a memorial to Covington County’s fallen war dead but also a reminder of the vision and dedication of Kenneth G. Johnson. Semper Fi.

The author thanks Mrs. Helen Johnson for her help in telling her husband’s story.

Editor’s note: Commemorative bricks honoring veterans may still be purchased. The cost is $100. and forms are available on the city’s website. You may also contact Kelly Ralls at 334/428-1141 or kelly.ralls@cityofandalusia.com.