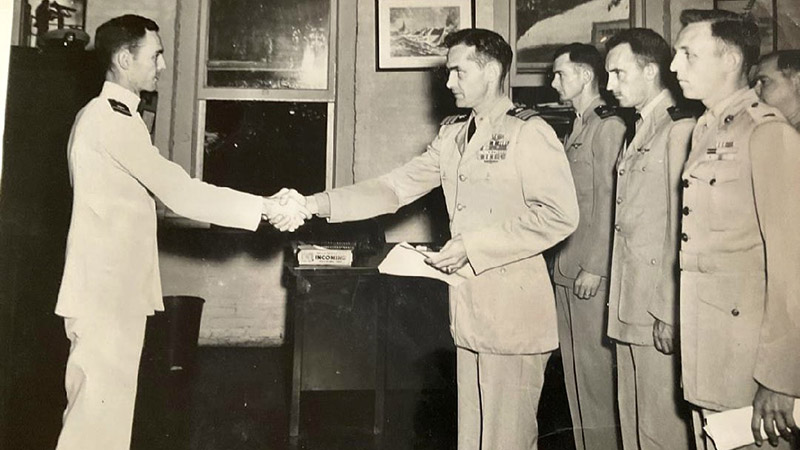 Alan Riley didn’t think he would live to see the end of the war. There had been typhoons before but this one on June 5, 1945, seemed to follow the Hornet and other ships of Admiral Halsey’s Task Force 38. It would eventually damage 25 U. S. Navy ships and cost the lives of six sailors. The Hornet’s bow was bent downward some 25 feet, making flight operations doubtful.

As soon as the storm had subsided, the Hornet tried to launch planes to search for any ships in distress. The first plane launched spun into the sea because of the tricky winds over the collapsed section of the flight deck. Hornet’s commanding officer, Captain Austin Doyle was nothing if not meticulous about his ship’s capabilities. Captain Doyle did something so unorthodox that it has never been attempted again.

The original design of the Essex-class carrier made them capable of backing with sufficient speed as to launch planes from the rear. Captain Doyle ordered the Hornet to back until 18 knots of wind over the stern allowed him to launch 24 search planes. For Alan Riley, it was a sight he would never forget.

Alan Meredith Riley was born January 4, 1925, in Andalusia, Alabama. His parents were Alsie and Pattie Riley. Alan was the youngest of four children. He learned hard work early by working at Perrinot Riley’s dairy farm in the mornings before going to school. He graduated from Andalusia High School in 1943. Just two days shy of his 18th birthday, Alan volunteered for military service and joined the Navy. 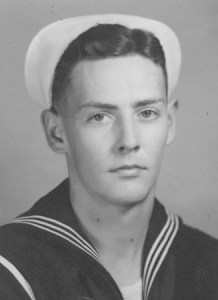 Alan completed basic training in San Diego, California where he finished first in his class. He was then sent to advanced Landing Craft School before reporting to the USS Hornet [CV-12].

The original Hornet [CV-8] was sunk during the Battle of Santa Cruz in October 1942. Hornet was just a year and six days old when she was lost. Meanwhile, several thousand miles away at the Newport News Shipbuilding and Drydock Company, Virginia, the keel of the USS Kearsarge had been laid down three months earlier. The Kearsarge was named for the USS Kearsarge which had sunk the CSS Alabama off the coast of Cherbourg, France in 1864.

On January 21, 1943, the Kearsarge was renamed USS Hornet [CV-12] in honor of her proud predecessor. She was launched on August 30, 1943, some 70% complete. Members of her crew began arriving to assist with her fitting out [the process of completing the construction of the ship after launch]. QM2 Alan Riley reported aboard at that time to help ready the Hornet for sea trials and commissioning.

Like the rest of the crew at commissioning, Riley would be known as a “plank owner,” after the days of wooden ships. On November 29, Hornet was placed in commission by Secretary of War, Frank Knox. His wife presented the battle flag of the Hornet [CV-8] to Captain Miles Browning who accepted command of the new Hornet as a combat ship of the United States Navy.

After fitting out, the Hornet took air groups aboard and began sea trials. Hornet then returned to Norfolk before departing on a 14-day shakedown cruise near Bermuda. During the two-week operation, the training was so rigorous and fast-paced that six of her F4F Hellcat fighters were lost to accidents.

On February 14, 1944, Hornet departed for San Diego by way of the Panama Canal. She arrived on February 27. Before leaving for Honolulu, Hornet embarked some 2,000 Marines, along with their equipment and welcomed aboard Admiral J.J. “Jocko” Clark, Commander Carrier Division 13. Hornet departed for Majuro in the Marshall Islands on March 15. 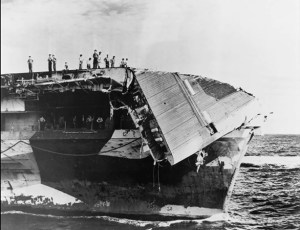 During this time, Alan Riley was becoming familiar with his duties as a quartermaster. Before getting underway, quartermasters are responsible for procuring charts and other navigational and oceanographic publications. Once underway, they assist the Officer of the Deck [OOD] and the Navigator, as well as stand bridge watches as the helmsman.

On March 20, Hornet departed Majuro and became part of Task Force 58. She conducted raids on Palau, Yap, Woleai, Ulithi and the Caroline Islands. Later in June, Hornet participated in the invasion of the Marianas island of Guam, Tinian and Saipan. On May 29, Captain William D. Sample relieved Captain Browning as commanding officer of the Hornet. Browning had been removed from command by a Court of inquiry.

On June 19, Japan sent 15 of its aircraft carriers and seven battleships to attack the American fleet. The battle that followed came to be known as the Battle of the Philippine Sea.

Of the more than 400 Japanese planes that attacked, 378 were shot down by U.S carrier-based aircraft. Japanese Vice-Admiral Ozawa’s battle logs showed only 35 operational aircraft after the battle. The battle became known as “The Marianas Turkey Shoot,” after one Navy pilot remarked, “It was like a turkey shoot back home.” The Japanese also lost two carriers to U.S. submarines. It was widely accepted that the devasting losses led to the deadly kamikaze attacks that took place in the last 10 months of the war.

Captain Austin K. Doyle relieved Captain Sample as commanding officer of the Hornet on August 8, 1944. Hornet would participate in the Battle of Leyte Gulf in October 1944, the invasion of Iwo Jima in February 1945 and the invasion of Okinawa in April 1945. Shortly before the typhoon of June 1945, Hornet’s pilots participated in raids against the Japanese homeland. In all, the Hornet would earn nine battle stars during the Pacific war. Her carrier pilots had flown more than 18,000 sorties, shot down 668 aircraft and destroyed 73 ships.

After the war, Riley recalled being nervous while at the helm [steering the ship], particularly if the Admiral was on the bridge. He noted, “We got lucky with the kamikazes.” Many U.S. ships were lost during the Okinawa battle but the Hornet was unscathed [one plane crashed just short of her]. At some point, Alan Riley was commissioned an Ensign before discharge.

The Navy sent the Hornet back to the States for repairs in July 1945. By the time the repairs were completed, the war was over and Hornet would take part in Operation Magic Carpet, helping return soldiers home. 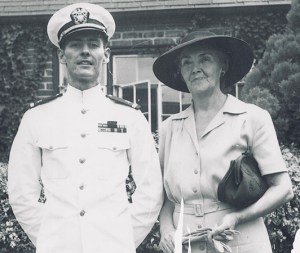 In 1950, Alan went to work with Allis Chalmers in Wisconsin. After a year, he returned to Andalusia and joined Alabama Textile Company [Alatex] as Vice-President. Alan married Jane Azalea Morris of Birmingham on December 12, 1955.

Alabama Textile Company was purchased by Cluett, Peabody and Company in 1968. Alan later was named Director of Southern Manufacturing. In 1974, Cluett, Peabody purchased Spring City Knitting Company and relocated Alan Riley to their headquarters in Cartersville, Georgia. Alan was named President of Spring City Knitting Company, where he served until his retirement in 1987. Alan was active in the Cartersville Rotary Club, the Cartersville Housing Authority and was a member of Sam Jones United Methodist Church.

The author thanks Peter Riley and his sister, Ruth Riley Davis, for their help in telling their dad’s story.

The author has several connections to the Hornet. His cousin, the late James Edgar Lambert, was an Aviation Bo’suns Mate during WW II under Captain Doyle. Captain Doyle’s son, Rev. Dr. Peter Doyle, a Presbyterian Minister of Opelika, Alabama, is a special friend of the author.