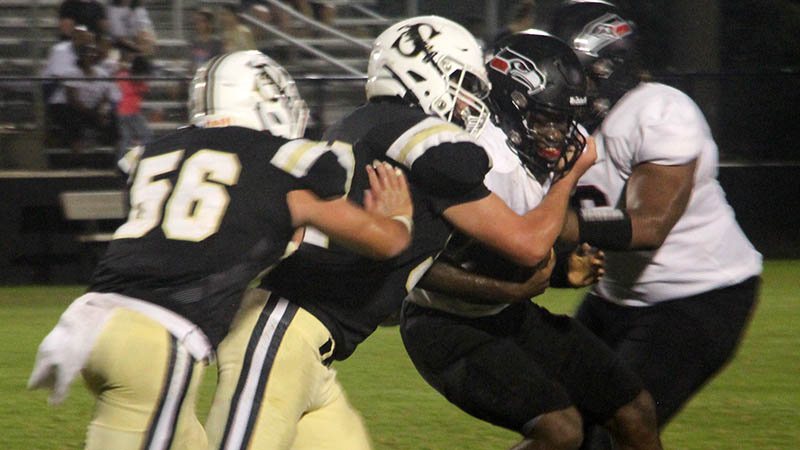 The Straughn defense was stingy against Daleville. Pictured above taking down the Warhawk quarterback are Connor Palmer and Wyatt Smith. (PHOTO BY ROBERT BLANKENSHIP)

Straughn scored early and took off to a big lead, scoring a region victory over the Daleville Warhawks, 45-12.

Daleville had some trouble early with handling kickoff returns, including on the very first one of the game as the Warhawks fumbled the ball setting the Tigers up at the 42-yard line. Two plays later Aaron Olhava took the handoff around the left end for a 36-yard score. Brenden Bartholomew’s extra point was good to give Straughn the early 7-0 edge.

The Straughn defense held its ground on the ensuing drive, forcing a punt that was blocked by Drew Ferguson. On third-and-six from the 16-yard line, Layne Grantham passed to Micah Turner who went over his defender to haul in the catch in the end zone, making the score 14-0.

Again, the defense held Daleville, and again, the punt was blocked and downed at the 19-yard line. From the 5-yard line, Nic Williams took the handoff around the right side. With 2:46 to go in the first, Straughn was ahead 21-0.

Early in the second quarter, Daleville was facing a third-and-12 at their own 23 when Connor Palmer made his way into the backfield for the sack.

On the first play following the punt, Grantham found Parker Black open behind the defense who cruised 73 yards for another Straughn score. Another successful PAT by Bartholomew lifted Straughn to a 28-0 lead.

Daleville got on the board on the following possession scoring on a 38-yard run. A two-point conversion attempt failed, making the score 28-6 with 1:23 to go in the first half.

That score didn’t hold long as Mack McIntyre took the kickoff, broke a tackle, and raced for a 60-yard return leading to a 35-6 halftime score.

The Tigers picked up where they left off coming out in the second period. After returning the opening kickoff to the Daleville 47, the Tigers opened with a 21-yard run by Olhava. After a holding penalty backed the Tigers up, Grantham went to the air, hitting Micah Turner for a big 37-yard gain to the 3-yard line. On second-and-four, Olhava pushed his way into the end zone. The extra point made the score 42-6.

The scoring slowed after that. Bartholomew added the final score for Straughn, nailing a 29-yard field goal early in the fourth.

Daleville made the score 45-12 after scoring about midway through the period, which was the final.

With the win, Straughn is 2-0 overall and in region play. Next week, the Tigers travel to Clarke County (1-1) for a non-region contest.