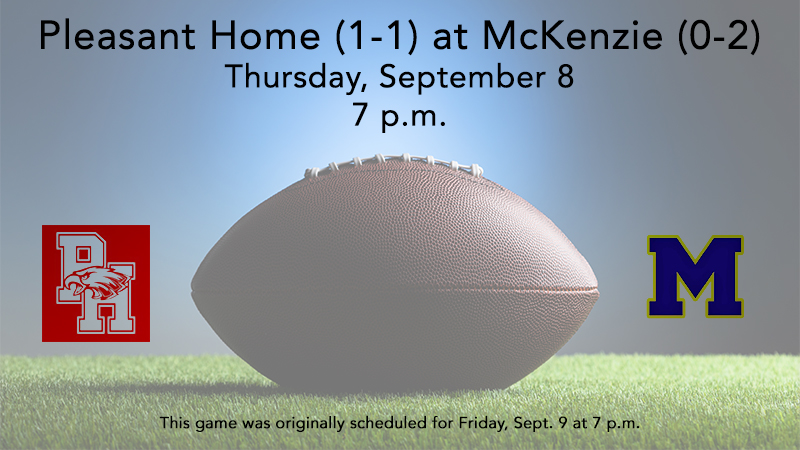 (This game was originally scheduled for Friday, Sept. 9 at 7 p.m.)

This will be the 19th all-time region meeting between the two teams dating back to 2004. The Tigers have a 12-6 series lead with the last win for the Eagles in 2019.

“I know McKenzie has some impressive team size and a fantastic running back. Coach Ezell (Powell) has won a tremendous amount of ball games in his career and will have them coached up. They will present a challenge but one that we embrace and look forward to meeting,” Head Coach Cody Sellers said.

Sellers added that the Eagles were able to see where they are as a team last week.

“We are not performing at the level we want to be or thought we would be at this point. Red Level did a good job, and Coach (Kenny) Skipper called a brilliant game. However, it’s hard not to feel like we beat ourselves in a lot of aspects this past Friday. When looking at the stats, we led in a couple of crucial categories like rushing and total offense but also in turnovers and penalty yards, which really hurt us and came at critical times in the game. They killed drives and stopped momentum in deciding moments. We also played sloppy and were not technically sound. Those factors will not lead to success.”

The loss helped the team see that the small details can make a difference in a big game.

“Setbacks and losses happen, but it’s how you respond that determines what type of team you are. Those Friday night lights can reveal cracks the sun at practice doesn’t always show. It’s good to see your faults, so you can address them and work toward correcting them. All it takes is one play where you lose focus or don’t give your best effort to change the outcome of a game. I believe this past Friday was a great example to hammer this point home to our players,” Sellers said.