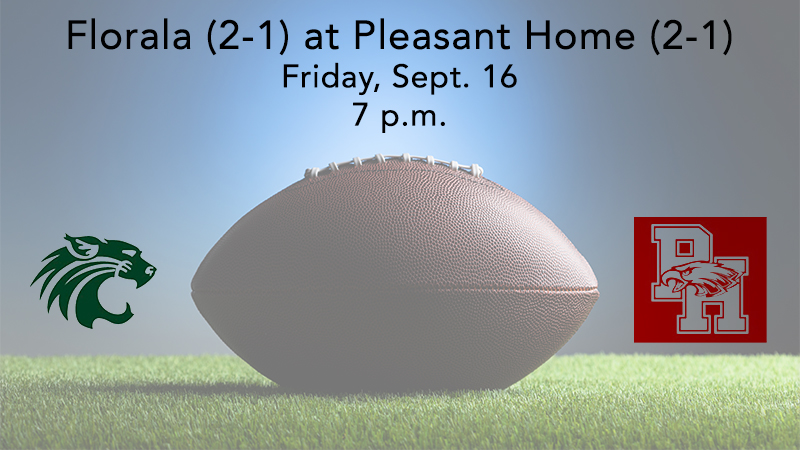 The two teams will match up for the 23rd straight season. The Eagles hold a slim 12-10 lead all-time, but the Wildcats have won the last four contests.

Both coaches spoke highly of their opponent for this week’s game.

“It will be my first time experiencing the Florala-Pleasant Home rivalry. They (Pleasant Home) have had some success here lately after a big road win at McKenzie and are riding high right now. We will have to be ready to roll and continue playing well,” FHS Head Coach Jordan Cantrell said.

“They (Florala) have some explosive playmakers and do a great job keeping opposing defenses off balance. They fly to the ball on defense and are not afraid to attack rather than react. Coach Cantrell has them playing well right now, and it will be a challenge to come out with a victory. We look forward to the opportunity to test our resolve and once again measure our progress,” PHS Head Coach Cody Sellers said.

It is important to keep focus when playing another local team for several reasons.

“Our kids understand this is a region rivalry matchup and will continue to be competitive and leave it all on the field. They have been working very hard and look forward to the challenge of facing another rival,” Cantrell said. “Anytime you play an in-county rival, it’s going to be emotional. The trick is to use the emotion as fuel to create laser focus and drive you when you are exhausted. You can’t let the emotions control you and cause you to make mistakes. We didn’t do a great job of that the last time we played an in-county rival. Hopefully, we have learned from that and won’t make the same mistakes,” Sellers said.

Cantrell added that the Wildcats fought back after being two touchdowns last week. “Southern Choctaw got on us pretty quickly, and it was a good thing we responded. We knew we had to perform well to win because they had some big athletes. We were really proud of our defense after they did not allow any points in the second half. The offense scored 38 points, and our special teams performed well.”

Sellers added that the Eagles came together and picked up a crucial region win last Thursday night. “We are taking steps forward with our execution and playing better assignment sound football. We still have plenty of room to improve on in many areas and will continue to work on doing so. It was exciting watching our playmakers step up in crucial moments, and that is the type of performance it will take for us to be successful.”