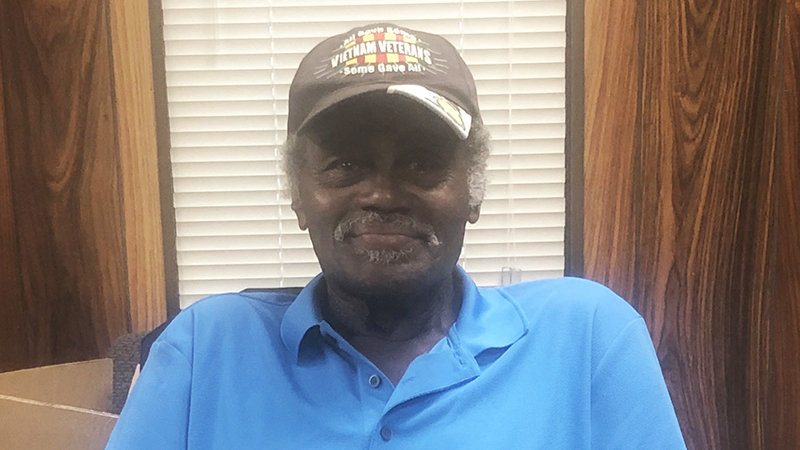 Charlie Walker remembered when the AK-47 round struck him in the left lower back and buttocks, “It felt like Superman hit me!” He didn’t know it at the time, but that wound was his ticket home from Vietnam.

Charlie Frank Walker was born January 27, 1946, in Georgiana, Butler County, Alabama. His parents were Jimmy Lee and Mylan Johnson Walker. Charlie attended Georgiana schools until the 11th grade when he decided to leave and go live with his sister, Eloise Hall, in Buffalo, New York. Charlie worked at a foundry in Buffalo until he joined the Army in January 1968.

After completing basic training at Fort Dix, New Jersey, Charlie was sent to Fort Sill, Oklahoma, in March 1968 where he underwent training in field artillery. He was deployed to Vietnam in May 1968.

Charlie Walker arrived in Vietnam and was sent to Lai Khe, located about 60 km. north of Saigon. He was assigned to Company D, 1st Battalion, 16th Infantry Regiment, 1st Infantry Division [The Big Red One]. Charlie recalled, “They gave me a M-14 and ammo clip and I went out on patrol.” Shortly after that, he was asked to replace a radio operator who had been killed in action. The radio backpack weighed almost 24 lbs. and was quite a load for Charlie who weighed about 150 lbs. Charlie never complained, remembering, “That backpack saved my life more than once. It absorbed shrapnel and at least one AK-47 round.” 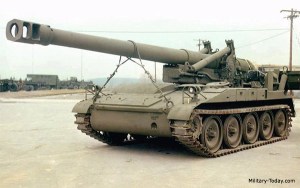 An 8-inch M110 self-propelled howitzer [Charlie Walker was a Crew Chief on a gun like this] [Photo: military.army.org]

Whenever his company was sent out on a search and destroy [S and D] mission, Charlie was the spotter for artillery support when it was called in. After a shell would hit, he would call back to the artillery unit with corrections to bring fire onto the target. On one mission, his unit came across an NVA [North Vietnamese Army] base camp that was made up of women and one was captured. Many of their missions were near the dangerous Ho Chi Minh trail where they often encountered the NVA.

On one of those patrols, Charlie’s unit got into a firefight and he was wounded when a piece of shrapnel from a grenade bounced off his forehead. He didn’t remember being hit but was bleeding and a medic found the wound. He received the Purple Heart from that wound.

Charlie and the 1st Battalion, 16th Regiment, were deployed by helicopter to the Mekong Delta in May. They were a part of the offensive designed to counter the Tet Offensive which had begun in January 1968. During the Tet Offensive, more than 60 district capitals in the Delta had been attacked. On one S and D mission, they discovered a complete NVA hospital that had been built underground. Charlie recalled, “We went in one end and they came out the other.”

On another mission near an old rubber plantation, Charlie recalled, “I was standing by the Lieutenant and talking about returning to base camp when we were suddenly attacked by a large NVA unit….They were coming from all directions.” Charlie was hit in the lower back, left hip and buttock by an AK-47 round. Charlie recalled, “It felt like superman hit me…I didn’t think I was going to make it…. I was praying and calling for my mama.”

After the battle had subsided, Charlie was found and placed on a stretcher. As they carried him across the rough terrain, he remembered being thirsty and hurting all over. At some point, they sat the stretcher down beside a small stream. Charlie recalled, “I was so thirsty that I managed to roll off the stretcher and into the water.” 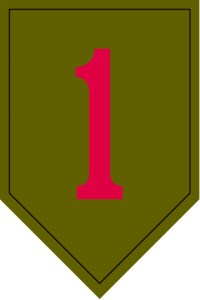 Charlie was treated at a field hospital before being flown by Medevac to Tan Son Nhut Airbase. From there, he was flown to a hospital on Okinawa. The doctors there placed a clamp over the fist-sized wound on Charlie’s left buttock. After the wound became infected, Charlie was flown to Fort Gordon, Georgia.

The doctors at Fort Gordon performed surgery using skin grafts from his thigh to get the wound to heal. Charlie was in the hospital about a month before he was released. He was transferred to Fort Stewart, Georgia, where he spent several months before he was deployed overseas.

Charlie was deployed to Germany in 1970 and assigned to Battery A, 3rd Battalion, 35th Field Artillery Regiment. He had been promoted to Sergeant and was made crew chief for an 8 inch, M110, self-propelled howitzer. He served in Germany until January 15, 1971 when he was discharged from the Army with the rate of Sergeant [E-5]. He had earned the Defense Service Medal, the Vietnam Service Medal, the Vietnam Campaign Medal and the Purple Heart with two Oak Leaf Clusters.

Charlie returned to Buffalo where he earned his GED. Charlie married Fannie Allison in Buffalo in 1972. She was originally from Demopolis, Alabama, and they moved back there in 1972. They were divorced in 1977.

Charlie’s parents had moved to River Falls, Alabama, so he moved back home with them and went to work with Dixon Plywood in 1977. He worked as a sheet-turner in the gluing operation under Kenneth Straughn. Both worked for the author who was the General Manager from 1970 -1978, when the company was sold to Tennessee River Pulp and Paper Company. The mill was sold to Louisiana-Pacific around 1983. After the mill was shut down, Charlie went to work for Jimmy Blanton in his insulation business. He worked for Blanton for 25 years.

Charlie married Willie Pearl Peterson in 1987 and they have been married for 35 years in 2022. They have two sons, Marcus Dorsey and Charlie Walker, Jr. They currently reside in Andalusia, Alabama, on Dunson Street.