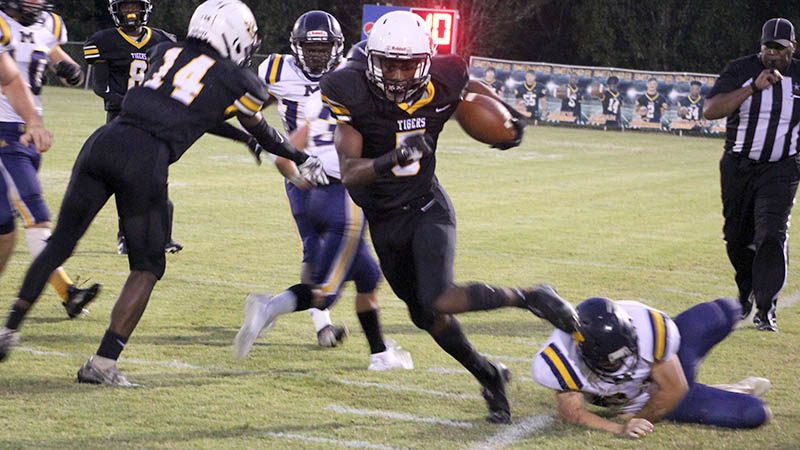 Javen Poindexter tip-toes down the line to pick up positive yards for the Tigers. (PHOTO BY ROBERT BLANKENSHIP)

An interception in the end zone in the final seconds capped a one-point victory for the Red Level Tigers as they defeated McKenzie, 25-24.

The two teams exchanged multiple leads through the game, but it was Red Level who drew first after taking possession on a botched punt return by McKenzie. The Tigers capitalized when Javen Poindexter found Malikye Wright open for a 22-yard touchdown. Tony Veasey’s extra point gave Red Level a 7-0 lead.

McKenzie’s Bo Daniels was a one-man show, scoring multiple times, including on the first play of their next possession, a 63-yard. A two-point conversion lifted McKenzie to an 8-7 edge.

In the second quarter, Daniels struck again with an 85-yard run leading to a 16-7 lead for McKenzie.

Red Level struck back before the end of the half when ZanMeyon Callaway scored from four yards out. A two-point attempt was no good leading to a 16-13 halftime score.

The home Tigers took the lead early in the third period when Poindexter found running room for a 29-yard touchdown scamper. Another 2-point attempt failed, but Red Level was in the lead 19-16.

Then, Daniels struck again on the first play of the following drive, going 75 yards to the zone. The 2-point attempt was no good, but McKenzie reclaimed the lead, 22-19.

Late in the game, the McKenzie defense held Red Level and instead of punting from the end zone, the Tigers chose to give up a safety with 1:53 remaining.

McKenzie moved the ball, but the game ended when Wright came down with an interception in the end zone.

The win lifts Red Level to 3-1 overall and 3-1 in 1A Region 2. The team travels to Bullock County next week.