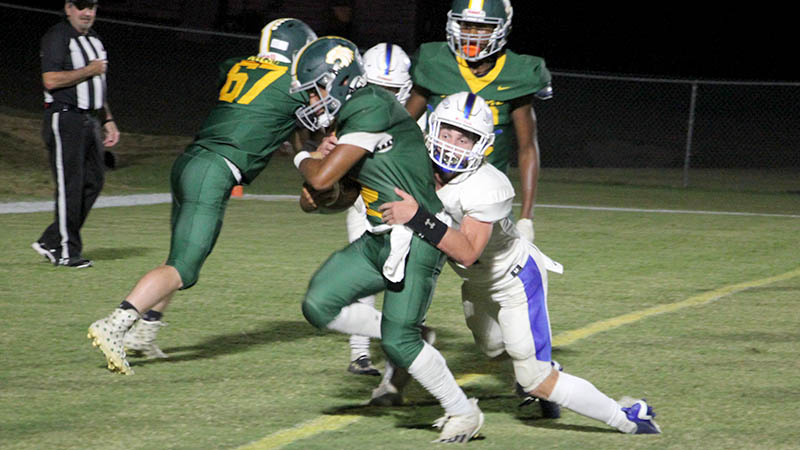 Florala senior Johan Zamora carries a Samson defender across the goal line to score the Wildcats’ first touchdown of the game. (PHOTO BY ROBERT BLANKENSHIP)

The Florala Wildcats got off to a fast start against the Samson Tigers on their way to a 28-14 victory on homecoming night.

The victory lifts Florala to a 4-1 overall record midway through the season, an improvement from a season ago when the Wildcats managed only three wins. While Samson was a non-region opponent, Florala is 2-1 in 1A Region 2.

After a short kickoff, Samson began the game with good field position, but the Wildcat defense held them at the 20 on a fourth down play.

Taking over, Florala began a long, run-heavy drive featuring quarterback Rayshon Coleman and senior John Howell. Howell’s 24-yard run into Samson territory was the longest play of the drive. On the 2-yard line, senior Johan Zamora got the call and found the end zone. Dalton Jackson’s point-after made the score 7-0 with 3:16 to go in the first.

The Wildcat defense made quick work of Samson on the following possession, forcing a three-and-out.

The Wildcats made several big errors in the game that likely kept Samson in the game. After forcing another three-and-out, the Samson punt was touched by a Wildcat and then recovered by the Tigers at the Florala 28. They quickly capitalized scoring on the first play, cutting the lead to 14-7.

Weeks quickly made up that score when he returned the kickoff about 73 yards. The point-after missed as Florala held a 20-7 lead.

The Wildcat defense once again held Samson on a three-and-out and they took control at their own 37. Coleman started the possession with an 18-yard gain followed by a 19-yard pickup by Zamora. A few plays later, Howell picked up 13 yards to the 2-yard line and would finish it himself on the next play, scoring what would prove to be Florala’s final score of the night.