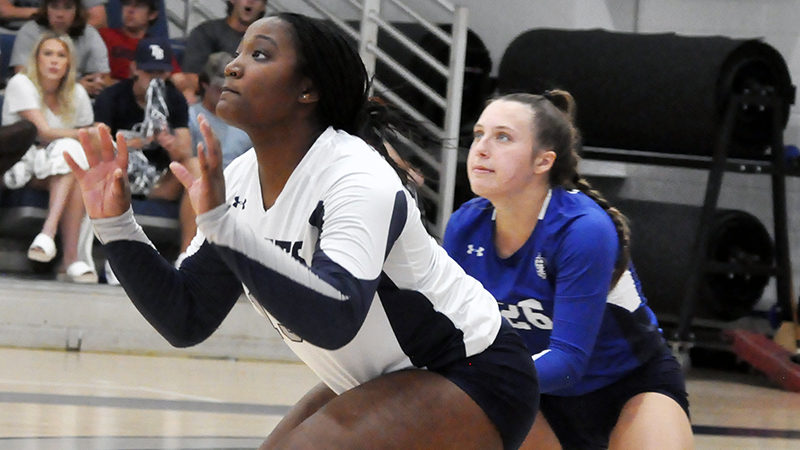 Pensacola State College made its trip to Andalusia worthwhile with a 3-0 sweep at LBW Community College in non-conference volleyball action Monday night. 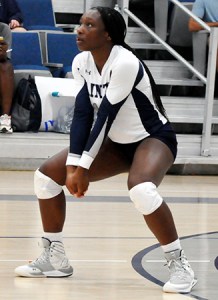 Samia Mason watches a play closely on defense for the Saints.

SET 1 (Pensacola State 27, LBW 25)
Brianna Wilson began the match with a kill as LBW took a 3-0 lead. Caroline Bailey and Faith Peters also added kills as the margin grew to 6-2. PSC rallied back with four straight points, and Katrina Espinosa tied the score at 6-6. After Wilson had another kill for an 8-6 lead, the Pirates took a 13-9 advantage. Lyndi Bakker earned two kills, while Jada Lowry earned an ace during the 7-1 run. Bailey and Peters brought the heat with some vicious kills and closed the deficit to 17-15. Anyaliz Rodriguez widened the cushion to 22-17 before Rhiannon Keck started a 7-1 surge with a kill. The Saints reached set point at 24-23 with consecutive kills from Bailey but fell short in extra points.

SET 2 (Pensacola State 25, LBW 22)
The two teams went back and forth in the early stages of the second set and forced a 4-4 tie. Paige Patterson gave the Pirates a 10-6 lead with a kill before Jaden Williams, Bailey, and Zationna Horne brought the Saints within one at 11-10. PSC responded back and took an 18-13 lead. Williams and Wilson each earned another kill and closed the gap to 19-16. Williams then had an ace as LBW crept closer and took the score to 21-19. Pensacola State withstood the late surge and took a 2-0 lead in the match with a block. 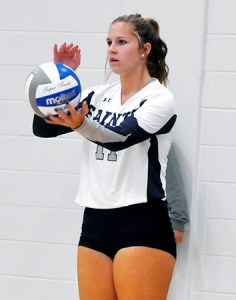 Amy Garner prepares to serve the ball to the Pirates in the third set.

SET 3 (Pensacola State 25, LBW 13)
Caleigh Davis notched a kill for a 2-1 lead in the third set before the Pirates took a 9-2 advantage. Julia Neveu had three aces, while Rodriguez added a kill during the 8-0 run. Amy Garner ended the drought with a kill as the Saints cut their deficit down to 11-5. Another spree

LBW closes the month with two conference matches. The Saints will host Wallace-Selma Wednesday, Sept. 28, at 5 p.m., and then travel to Coastal Alabama-East Thursday, Sept. 29, at 6 p.m.