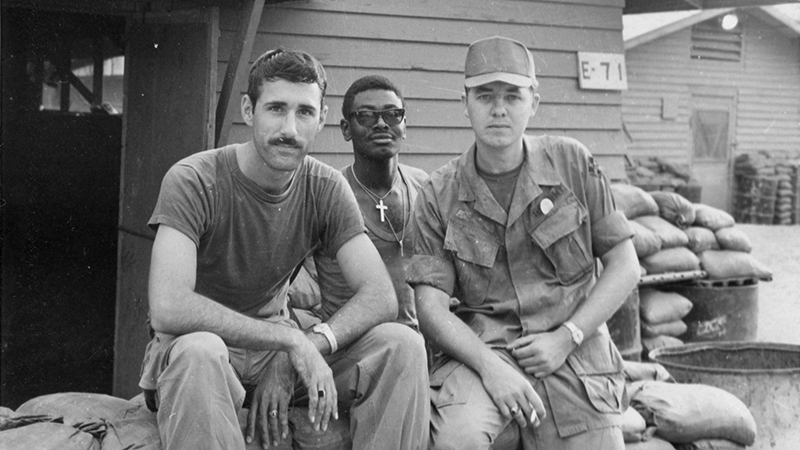 For most men like Gregg Berry, Mother’s Day was always special, but the one in Vietnam on May 10, 1970, would be remembered a long time for all the wrong reasons. A little after midnight, Gregg was awakened by the sound of a large explosion, followed quickly by several more. Suddenly wide-awake, his instincts kicked in and Gregg grabbed his M-16 and raced outside for the cover of a small ditch. He knew that the “hooches” [living quarters] were the targets of the Viet Cong and that the ditch offered some safety.

Gregg was drafted in May 1969 and received his basic training at Fort Benning, Georgia. After basic, he was sent to Fort Gordon, Georgia, where he trained as a telephone repairman. Gregg was deployed to Vietnam, arriving at An Khe in December 1969. The base at An Khe was called Camp Radcliff. Gregg was assigned to Company A, Headquarters Battery, 704th Maintenance Battalion, 4th Infantry Division.

Even though Gregg’s MOS [military occupation specialty] was telephone repairman, he was assigned as an M-60 machine gun operator on a gun truck. Gregg made many trips in convoys ferrying supplies from An Khe to Pleiku, the base for the Air Force’s 633rd Special Operations Wing. The Wing included the 6th Special Operations Squadron that flew the A-1 E/H Skyraider out of Pleiku. 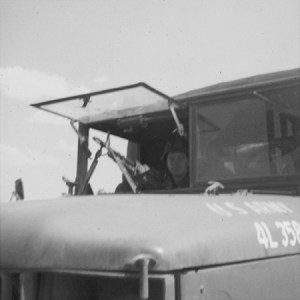 Gregg’s gun truck was a 2 ½ ton truck [called a deuce and a half] that had been heavily armored with one-inch steel plate on the sides and had machine guns mounted in the front and rear. Gregg rode “shotgun” up front with a 60-caliber machine gun mounted on the hood. It was removable when the truck was at base camp. Gregg’s friend, Roger Renaud, operated the fixed mounted 50-caliber machine gun right behind him. During the 5-6 months Gregg rode with convoys, he didn’t recall any outright ambushes by the enemy but he said they often received small arms fire.

An Khe was the largest heliport in Vietnam, making it a tempting target for the Viet Cong and NVA. Gregg remembered Saturday, May 9, the day before Mother’s Day, “We must have been celebrating Mother’s Day early, because we partied that day and on into the night with plenty of food and beer.” They had not gotten much sleep when the attack began.

The soldiers lived in hooches, the name given to any quarters where GIs could make a temporary place to live and sleep. In some places, a hooch was nothing more than a tent and a place to put down a sleeping bag. On larger bases, hooches were more permanent structures such as those at An Khe. Gregg’s hooch was about 15 by 20 feet with a concrete floor. The bottom four feet or so of the building was a wood wall, with the top several feet of the wall covered by screen wire. There was room enough for 12 to 15 men and their cots. The hooches were surrounded by drums filled with sand. Further out, a bunker line surrounded the base camp as a first line of defense. A determined and elusive enemy managed to slip past the bunker line on May 10.

There were about 10 hooches in the compound where Gregg lived and eight of them were hit by mortars, rockets or satchel charges. The attack only lasted about 30 minutes. Gregg recalled, “I never saw a single enemy soldier…. I lost several friends in the attack.”

Another incident happened around June or July after the Mother’s Day attack. The GIs living in a hooch employed Vietnamese women as maids [they were called hooch maids]. Gregg and his bunk-mates employed a hooch maid to keep their place clean and to wash their clothes. They called her, “Mama-san.” She was paid weekly with a carton of cigarettes by each man in the hooch. The GIs paid $1.50/carton and she resold them for about $5/carton. Sometimes in the field, the GIs bought cigarettes back for a dollar apiece.

The hooch-maid normally worked until 5 p.m. and was then driven to the base gate to go home. Gregg recalled an incident when he was at the hooch around 2 p.m. when the maid approached him and said, “Me go home.” Gregg replied, “No, you work until five.” After the maid asked several more times to be allowed to leave, Gregg asked her, “Why do you want to leave now?” 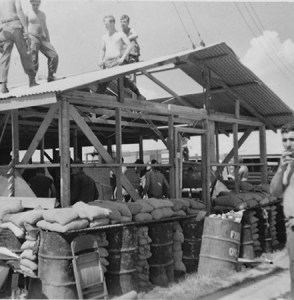 Sgt. Gregg Berry and the crew building their hooch on the base at An Khe, Vietnam. [Photo: Gregg Berry, John Vick]

The maid made a “slashing motion” across her neck, “Mama-San and Papa-San.”

In her broken English, the maid was trying to let Gregg know that if she did not return home now, her mother and father would be killed by the Viet Cong. The VC used that threat to force the Vietnamese people to transport weapons and supplies at night. Gregg, quickly hopped into a jeep and took the maid to the main gate. The war in Vietnam was as treacherous for the people of Vietnam as for the U.S. soldiers.

In late summer of 1970, Gregg was asked to become the battalion mail clerk. The previous mail clerk, Delbert Anderson, had been badly wounded. The job consisted of delivering mail to the soldiers who were operating in areas in the field, off the main base of An Khe. The usual means of transportation was a UH-1 Huey helicopter, flown to LZs [landing zones] and small operating bases throughout the central highlands. Gregg spent his last six months in Vietnam working as a mail clerk. He recalled, “I guess I was always lucky. We took small arms fire numerous times but were never seriously damaged.”

Gregg returned to the States in December 1970. He was told that he would be going to Germany. While on leave, Gregg was able to get his assignment changed by contacting Alabama Second District Congressman Bill Dickinson. He was surprised when he was assigned to Fort Rucker, Alabama, as NCO [non-commissioned officer] in charge of the post locator’s office. Gregg was discharged in December 1971. He had been awarded the Combat Infantry Badge, the Vietnam Service Medal, the Vietnam Campaign Medal, the Defense Service Medal and the Army Commendation Medal with two Oak Leaf Clusters.

After he left the Army, Gregg went to work for Alabama Electric Cooperative [now PowerSouth]. While working full time and with the help of the GI Bill, Gregg enrolled at LBW Junior College taking night classes. After he had earned his associate degree, he enrolled at Troy State College, taking night classes and earned a BS degree in Social Science in 1979.

Gregg worked for First Financial Corporation in Birmingham from 1980-87. After returning from Vietnam, Gregg suffered from PTSD and the effects of exposure to Agent Orange and was finally diagnosed as fully disabled. He was out of a job for a short time before beginning work with a construction crew building the Captain D’s restaurant in Andalusia. Gregg had left his resume with the local employment office and after a month, the local manager of the employment office came to see him. He told Gregg that with a college degree and 100% disability, he would be able to work in the local employment office. He worked there for the next 23 years.

Gregg married Teresia Brooks in 2008. He still suffers from PTSD and the effects of Agent Orange. Gregg and Teresia currently reside in Andalusia, Alabama.

The author thanks Gregg Berry for his service to our country and his willingness to talk about his Vietnam experience.