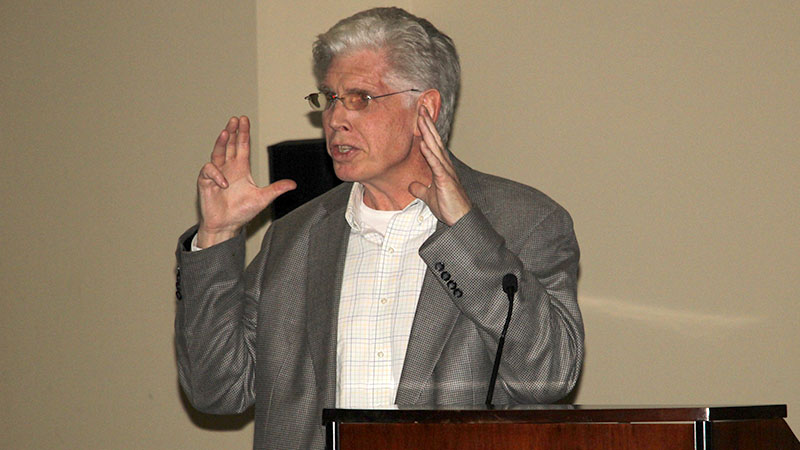 Mark Harris of the Dixie Art Colony Foundation made a presentation regarding the works of Carlos Alpha "Shiney" Moon Thursday, Sept. 29. (PHOTO BY ROBERT BLANKENSHIP)

A presentation Thursday by the Dixie Art Colony focused on the life and art of Carlos Alpha “Shiney” Moon ahead of a near monthlong exhibit.

Moon was a famous American artist who grew up in Andalusia on Auburn Avenue. He was the son of the late C.C. Moon, a photographer who was in business in Andalusia during the 1920s and 1930s in the Dixie Studio on the Court Square in the Prestwood Building. Shiney Moon moved to Florala in his adult life where he owned a successful dress shop, Pouncey’s, for many years.

Mark Harris of the Dixie Art Colony Foundation spoke about the life of Moon, including his time as a student in Andalusia and a business owner in Florala. Harris said Moon’s art career came later in his life and was relatively short as he passed away at the age of 47. The presentation also demonstrated Moon’s evolution as an artist from his rural landscape scenes to becoming more abstract.

“He basically began his career in 1944 and then he died in 1953,” Harris said. “I believe very firmly, and I’ve had others tell me the same thing, that had he lived longer he would have done extremely well and become well-known outside of his regional circle.”

Thursday’s presentation came ahead of an exhibit to open in Andalusia that will display selected works through Friday, Oct. 8. The exhibit is sponsored by the Dixie Art Colony Foundation with local partners, the City of Andalusia, Covington Historical Society, and ReAct Theatre and Arts.

An opening reception for the exhibit — titled “A Retrospective of the Works of Carlos Alpha “Shiney” Moon — will be held Sunday, Oct. 2, 2 p.m., at Andalusia City Hall. The public is invited to attend the reception.

Another event tied to the exhibit will be held on Sunday, Oct. 9, 2 p.m., again at city hall. The event will focus on the Dixie Art Colony, a group Moon in which Moon was deeply involved and helped him develop his skills as an artist.

Beginning with the opening reception on Sunday and continuing through Oct. 28, the exhibit will be open to visitors during regular city hall hours.