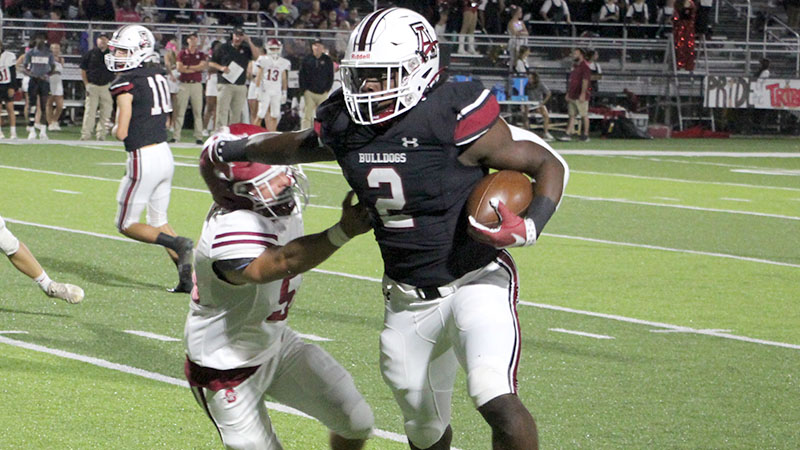 The third-ranked Andalusia Bulldogs took care of business once again to maintain its perfect record with a region win over Slocomb, 49-0.

With the defense dealing its second shutout of the season, the Bulldogs put together another lopsided win. This year’s team has outscored opponents 392-91 through eight games.

The Red Tops received a heavy dose of J’Marion Burnette early in the game with the Bulldog’s running back scoring the first two touchdowns of the game, the first a 2-yard rush up the middle and the second a 38-yarder. Burnette went on to record 129 yards on 16 carries with two touchdowns in the game.

AHS quarterback Jack Lathrop and receiver Connor Dalton connected several times in the second quarter, including a 14-yard touchdown pass to make the score 21-0 midway through the second.

As the first half winded down, special teams and defense would get on the board. On a punt that appeared to be tipped by Parker Adams, Tycamren Jackson fielded it after a bounce and took it back 39 yards to the end zone.

About 30 seconds later, Kameron Weaver hauled in an interception and returned it the distance. Cobb Stewart’s point-after led to a 35-0 lead at the half.

In the third, Lathrop and Dalton connected again for the combo’s second touchdown of the night, this one from 17-yards out.

Zerrick Jones completed the scoring for Andalusia with a 1-yard run in the fourth quarter.

Lathrop finished the game 6-of-12 for 93 yards and two touchdowns. Both of those were to Dalton who finished with four catches totaling 87 yards.

Kameron Weaver was all over the Red Tops on defense, not only with the interception return, but also recording five tackles, three of those behind the line of scrimmage. Dorian Crittenden led the team with total tackles with 5.5. Garrett Blackston finished with 5 tackles and Xavier Marshall had 4.5 tackles.

The Bulldogs (8-0, 5-0) will face back-to-back region challenges to finish the regular season. Next week, they hit the road to take on region opponent B.T. Washington (4-3, 4-1) in Tuskegee. Then, AHS returns home for its final regular season game against Catholic-Montgomery (8-0, 5-0), the current top-ranked 4A team.