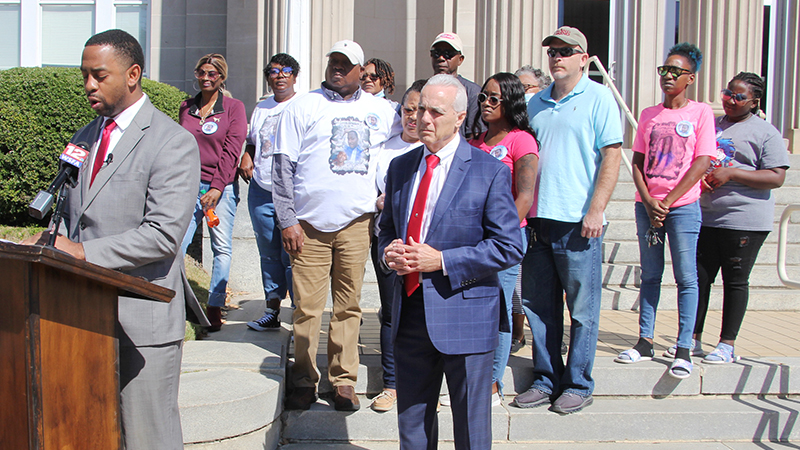 The family of Denarieya DL Smith stand on the steps of the Covington County Courthouse while Joel Caldwell of the Cory Watson Attorneys law firm, speaks about the death of Smith while serving a sentence at the Donaldson Correctional Facility in Bessemer, Alabama. (PHOTO BY ROBERT BLANKENSHIP)

The family of a man who was murdered while serving a sentence in an Alabama correctional facility are seeking answers and accountability, according to their lawyers who held a press conference in front of the Covington County Courthouse Friday.

Denarieya “DL” Smith was beaten and stabbed to death by another inmate on Oct. 1 at the Donaldson Correctional Facility in Bessemer, Alabama. According to the law firm representing the family, the staff at Donaldson failed to arrive on the scene in a timely manner despite shouts for help by other inmates.

Smith was one of three inmates to die at the state facility over the course of three days, between Sept. 29 and Oct. 1.

Smith, who was serving a life sentence for an attempted murder conviction in 2017, was pronounced dead in the early morning hours of Oct. 1. His death is being investigated as a homicide by the Alabama Department of Corrections.

According to attorney Joel Caldwell, an attorney representing the family, Smith’s death is further proof of the problems at the Donaldson facility.

“Following this incident, guards failed to respond in a timely manner despite numerous attempts by inmates shouting for help while DL bled to death on the floor. The number of inmates that have died at Donaldson Correctional Facility is deeply concerning. DL is one of 32 deaths at this facility, this year alone. That is 32 too many in this horrifying trend,” Caldwell said.

The family is being represented by the law office of Cory Watson Attorneys. Smith’s family said the last contact they had with him was the day before his death and that he did express concerns about the situation at the prison.

Caldwell read a statement in behalf of the family.

“We are heartbroken for the tragic and entirely unnecessary death of DL. Not only did the guards at Donaldson not protect DL from this brutal beating, they also lacked the professionalism and urgency needed to do their jobs as calls for help fell on death ears. There are far too many unanswered questions at this point. DL was given a sentence, but his sentence was not death. At the time of his sentencing, he was truly remorseful and working to better himself. Often DL would call home and wanted us to pass along this message to young people in our community: prison is not where you want to be.

“People behind bars are still people and deserve to be treated with a certain amount of respect and decency and have reasonable level of protection. That was not the case in this tragic event. As a result, our DL is dead. We are all hurting and we are grateful to those who are grieving and praying for us. We will remain patient as our attorneys seek answers and accountability through the justice system.”

While a lawsuit has not been filed to date, Caldwell said his firm will seek justice on behalf of the victim and his family.

“Our legal team has examined all circumstances and events surrounding the passing of DL. No parent should have to bury their child and we intend to hold the Donaldson Correctional Facility accountable on behalf of DL’s family,” Caldwell said.

In October 2016, the U.S. Justice Department began a statewide investigation into conditions in Alabama’s prisons for men after the Equal Justice Initiative filed complaints about widespread violence at several prisons, including the Donaldson facility. The EJI states that at least 78 people have been killed in Alabama’s prisons in the six years since the federal investigation started.

Donaldson Correctional Facility, a maximum security institution, is considered one of the deadliest correctional facilities in the state. Statistics released by ADOC show that at least 34 individuals have died in prison over a year-long period ending in July.

A lawsuit filed by the U.S. Department of Justice blames narcotics and violence within the state’s prisons to a lack of staff, “unconstitutional conditions,” and “deliberately indifferent” administrative officials.