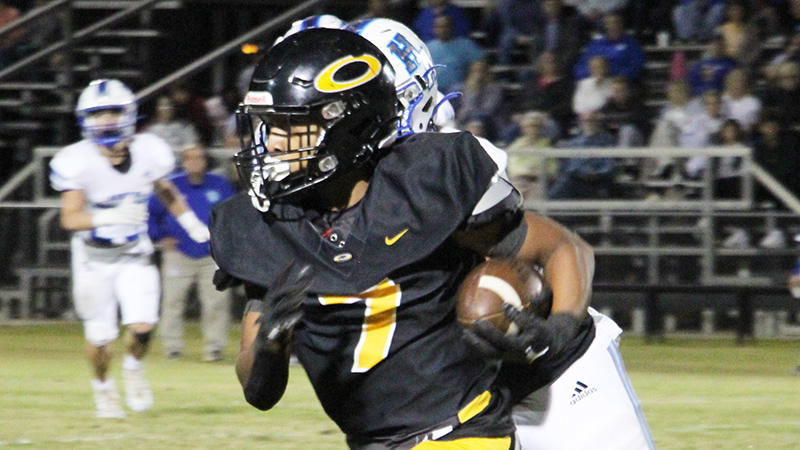 In a battle for first place atop the 3A Region 2 standings, the Opp Bobcats fell short to Houston Academy, 42-7.

The Raiders took the lead late in the first quarter with a halfback pass play that went 31 yards to the end zone.

Opp’s following drive ended abruptly with an interception that Houston Academy returned to the Bobcat 35. From there, Raider runningback Jeb Daughtry did much of the work, ultimately finding a hole for a 17-yard touchdown run.

Opp’s offense continued to sputter through the first half while the Raiders, especially Daughtry, was having success. Midway through the second quarter, Daughtry racked up 31 yards on a scoring drive that lifted the Raiders to a 21-0 lead.

At the end of the half, the Raiders were threatening, but a sack by Caden Kendrick and Jakalleus Lane gave Opp a chance to hold and get to halftime. But, consecutive passes led to another score with only 12 seconds remaining as the Raiders took a 28-0 lead into half.

Opp held the Raiders to start the third and then went on to score their only touchdown of the game. Terry Davis was helped get the momentum with three consecutive carries netting 25 yards. Later in the drive, quarterback Gray Jennings found Davis for consecutive receptions, the first for 17 yards and the next for a 12-yard gain to the 1. Jennings took it in from there.

But, Houston Academy responded quickly and went on to put the game out of reach for the Bobcats.

Davis was a workhorse for the Bobcats, leading the team with 119 yards rushing and adding 54 yards on five receptions. Jennings finished the night 11 of  22 for 145 yards passing.