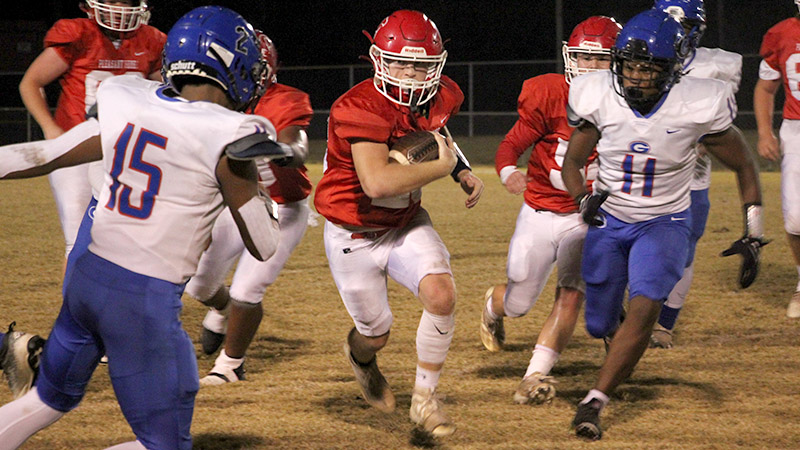 Pleasant Home’s Josh Hawkins picks up positive yardage against the Georgiana Panthers in the team’s final game of the season.

The Pleasant Home Eagles suffered a loss at the hands of region opponent Georgiana, 60-14, in the final regular season game of the season.

The Panthers, with some big plays through the air, gained 414 total yards compared to 219 for the Eagles.

The Eagles lost two fumbles, one of which was picked up and returned for a touchdown.

Pleasant Home took an early lead in the game after a six-play, 70-yard drive. The Eagles converted a third-and-10 from their own 30-yard line when quarterback Mason Anderson found Luke Gatewood for 19 yards. On the next play, Anderson found running room and took it the remaining 51 yards into the end zone. Ty Clark’s point-after made the score 7-0.

The remainder of the first half belonged to Georgiana, beginning by taking the lead later in the first quarter on a three-yard run by Jayvion Ball. A two-point conversion throw from Jacobie Morgan to Jalen Crenshaw made the score 8-7.

Later in the first quarter, Georgiana struck fast with a  big play run from Quantavious Scott for 83 yards. The missed two-pointer put the score at 14-7.

Pleasant Home’s next drive ended with a fumble that was picked up by the Panthers’ Bishop Smith who took the distance to make the score 20-7.

The Panthers would add to their lead in the second quarter on two big pass plays by Morgan. The first of those was a 59-yard pass to Crenshaw and the second went to Nehemiah Altidor for 46 yards. Both touchdowns were followed by successful 2-point conversions, leading to a 36-7 halftime score.

After Georgiana added another touchdown to being the second half, Pleasant Home got back on the board. Josh Hawkins got things going with a strong 14-yard run across midfield. A few plays later, Anderson ran the ball for a nine-yard run for a first down. From the 34-yard line, Anderson found some running room a made his way into the end zone. Clark’s PAT made the score 44-14.

But, the Panthers came right back with their own score and the third quarter ended with the Eagles in a deep hole, 52-14.

Georgiana added one more touchdown early in the fourth, leading to the final score of 60-14.

Anderson finished the game for Pleasant Home completing 8-of-13 passes for 69 yards. He was also the team’s leading rusher with 98 yards and scored both of the team’s touchdowns.

Gatewood caught three passes for 29 yards and Hawkins also hauled in three for 21 yards while also rushing for 51.