Opp hosts W.S. Neal in opening round of playoffs 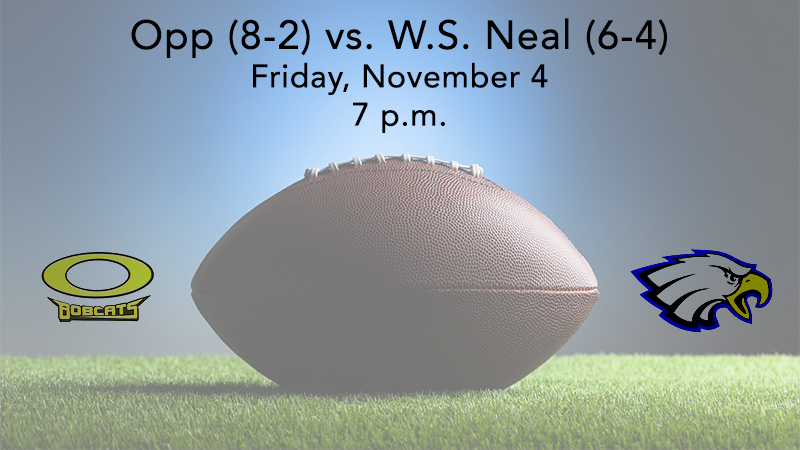 The two teams will battle for the 20th time overall on the gridiron. The Bobcats have a 13-6 all-time series lead over the Blue Eagles.

Region 2 second seed Opp goes into the playoffs for the 27th time in school history with an overall record of 12-26 and is 11-15 in the first round. Region 1 third seed W.S. Neal makes its 24th all-time appearance in the postseason with a 17-23 record and is 11-12 against opening-round opponents.

“We are familiar with W.S. Neal’s talent, and their middle school/JV program was really strong last year. They are a different football team than a year ago with more depth and a lot of team speed. Some of their guys are dynamic, and it will be a challenge for us with them coming out of a strong region. It will be a battle-tested group of guys we play Friday night in Channell-Lee Stadium,” said Head Coach Mike Dubose.

He added that it was important for Opp to play at home in the first round.

“We are pleased to be playing at home and feel pretty good about where we are right now. We need to play, prepare, and coach better. I think it’s always a big advantage and benefit to your team. We are excited about playing and being back at home.”

According to Dubose, the Bobcats did not play well at Ashford last week.

“Our quarterback (Gray Jennings) was somewhat hurt in the Straughn game and got a little more beat up in practice. Ashford played with a lot of emotion, and we didn’t but found ways to win. We did not play as well as I would have liked for us to do and were not as prepared but were able to end the regular season with a win,” he said.

The winner will play Saint James or Walter Wellborn in the second round next week.