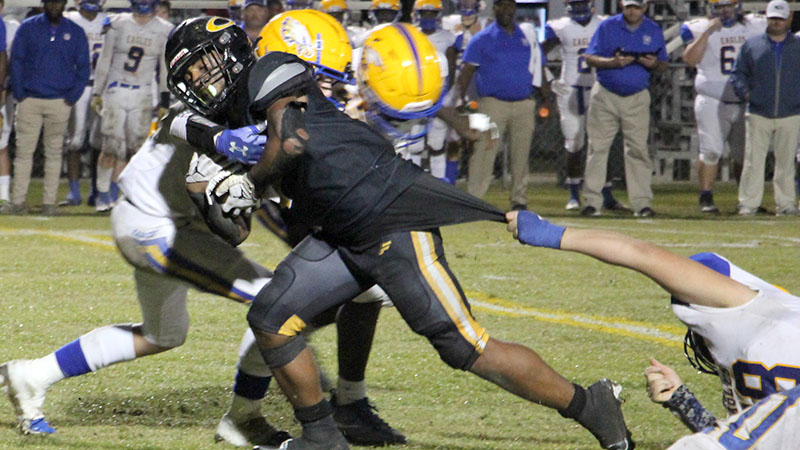 Opp runningback Terry Davis fights for a few more yards. The senior had 31 carries in the game for 114 yards and a touchdown. (PHOTO BY ROBERT BLANKENSHIP)

Opp saw its season come to a disappointing close when a late drive to tie the game ended with a turnover and touchdown for W.S. Neal as they clinched the win, 27-13.

Both teams’ defenses held early, assisted by miscues and penalties from the opposing offenses. W.S. Neal was the first to break through when senior Kevin Farrish found running room and a 52-yard run into the end zone with 27 seconds remaining in the first quarter. The point-after attempt was no good.

The Eagles would add to the lead in the second quarter. After a good punt return by Lakeitric Barnes set W.S. Neal up at the Opp 17, it appeared the Eagles were moving in the wrong direction with penalties. But, on fourth-and-eight from the 15, quarterback Carter Hodges kept the ball and ran it in for the score. A two-point try was no good, but Neal held a 12-0 lead with 7:37 to go in the first half.

With the first play of the following possession, Opp got its first big play of the game as senior quarterback Gray Jennings, who did not play last week due to injury, found Zeb Green open for a 30-yard gain. Senior runningback Terry Davis followed with consecutive runs of 11 and 8 yards. Jennings kept things going, throwing a strike to Robbie Gafford of a 9-yard pick up. Davis carried the load the rest of the way, ultimately scoring on a 2-yard push into the end zone. Prent Huggins’ extra point made the score 12-7, which would hold to the half.

Opp struck quickly in the second half. On the first possession, facing a third-and-nine, Jennings hit fellow senior JaKanye Mount in stride who took the ball 64 yards to the end zone, giving the Bobcats their first lead of the night, 13-12.

Opp was moving the ball on its next possession, including big chunks of yards on the ground by Davis and a 24-yard pass from Jennings to A.J. Coleman. The drive ended with a turnover at the 8-yard line.

It took until the fourth quarter for the scoreboard to change. Opp threatened, but turned the ball over on downs at the W.S. Neal 25. The Eagles handed the ball to Farrish who found running room and outran the Bobcat defense for a 75-yard go-ahead touchdown. A 2-point conversion gave the Eagles a 20-13 edge with 8:27 to go.

Later, Opp took possession at their own 40 with 2:52 to go. Jennings hit consecutive passes to Mount and Gafford for 15 and 13 yards, respectively. After a few positive runs by Davis, Jennings hit Coleman for a 12-yard pick up to the 23-yard line. With 1:19 remaining, W.S. Neal’s Caleb Peters jumped in front of an Opp pass and had open field all the way to his own end zone, dashing Opp’s comeback effort and sealing a 27-13 win for the Eagles.

Nelson Hall led the defense with 11 tackles and Colby Ballard had 10.

The loss ends Opp’s season with a record of 8-3.