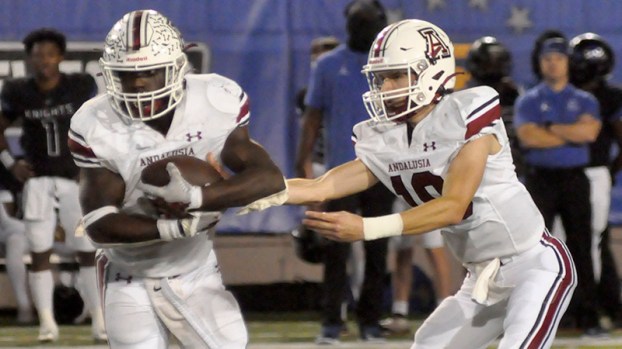 Jack Lathrop hands the ball off to Dorean Crittenden. 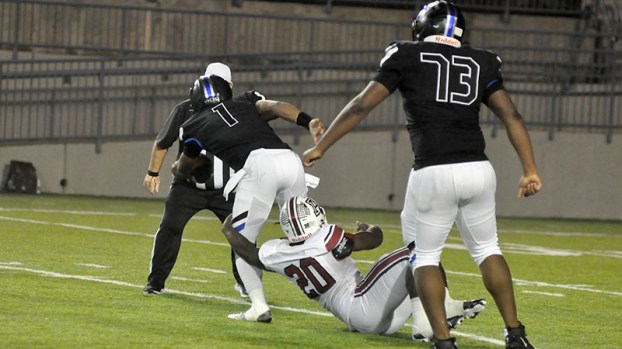 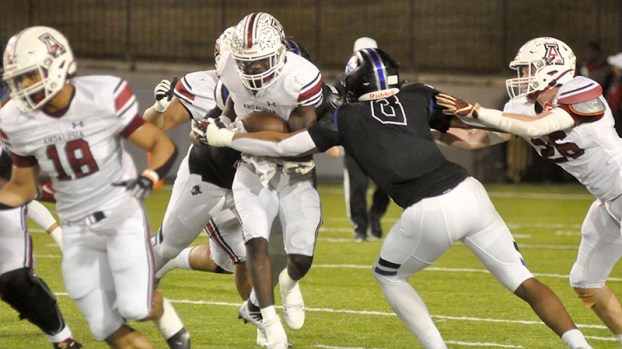 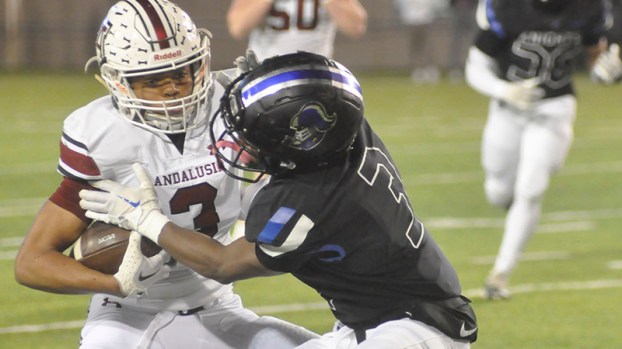 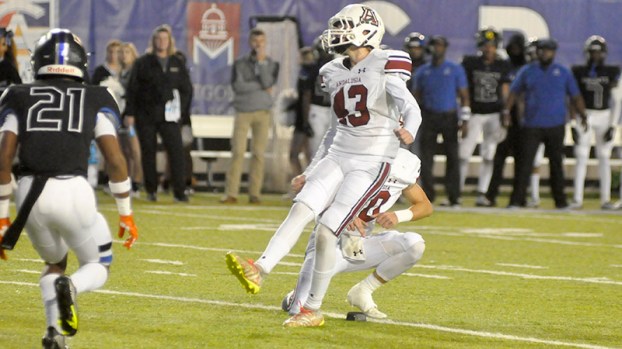 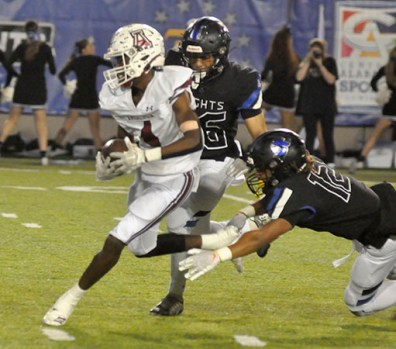 TyCamren Jackson weaves through the defense. 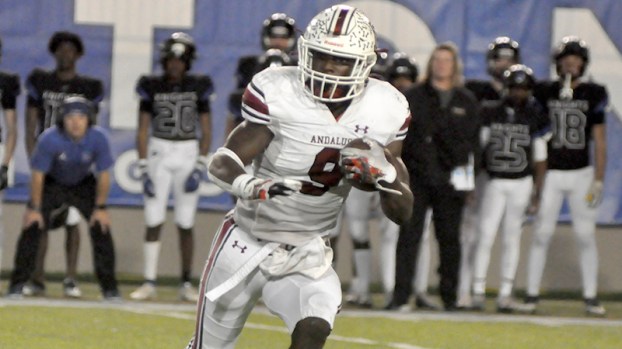 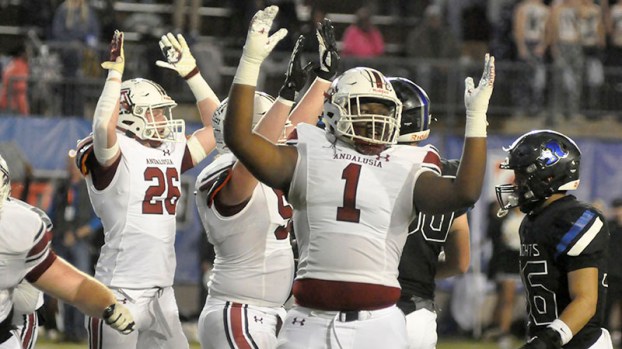 The Bulldogs begin to celebrate as the clock expires. 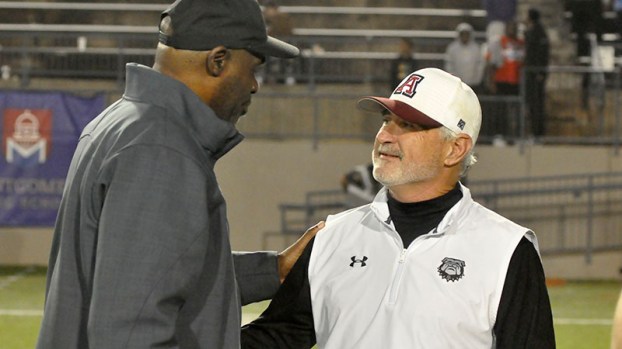 The Andalusia Bulldogs are heading to the 4A state championship game next week after defeating Montgomery Catholic 29-26 in the state playoff semifinal.

The Bulldogs came into the game without one of their biggest offensive talents as runningback J’Marion Burnette was out with an injury. But, they still had senior Dorian Crittenden who continued his strong play this season and carried the load for the Bulldogs, rushing for 208 yards on 45 carries and scoring two touchdowns.

Quarterback Jack Lathrop went 13 of 24 for 137 yards with a rushing touchdown and a passing touchdown that went to Tycamren Jackson, the team’s leading receiver with 92 yards on five catches.

The defense was key for the Bulldogs down the stretch, holding Montgomery Catholic to only one score in the second half. Leading the defense was Parker Adams with six tackles while Kaden Denson and Garrett Blackston each finished with five. Tycamren Jackson, Tyler Sigers and Landon Marshall each had four tackles. Sigers also had one interception in the game.

For Andalusia, the victory avenged their only loss of the season when Catholic won 45-23 in the final regular season game. This time, the Bulldogs came out on top, earning a place in next week’s 4A state championship game to be held at Auburn’s Jordan Hare Stadium on Friday, Dec. 2, with kickoff scheduled for 11 a.m. The Bulldogs will face the Cherokee County Warriors (12-2) after they defeated Oneonta 42-21 in the semifinal.

This will be Andalusia’s first appearance in a state championship game since 1977. Friday night’s game was the team’s sixth trip to the semifinals over the past eight seasons.

“This is very sweet. To be able to get to the Super 7 at Jordan Hare Stadium and have that type of opportunity to play on that stage, it’s almost emotional to be honest. It is tremendous opportunity for our players. It is what you dream of from the time you play tiny mite football when you’re 5-years old,” said AHS Head Coach Trent Taylor.

Taylor spoke on Friday night’s performances from two of his offensive players in Lathrop and Crittenden.

“What Jack (Lathrop) has done this season is great. He’s done everything for us. J’Marion (Burnette) gets a lot of press, but he would be the first to tell you that there are a lot of good players on this team. Dorean (Crittenden) is a feel-good story on our team and has been tremendous for us. He played a lot as a ninth grader, but we had some things to figure out and he was away from football for a time. He came back and has had a great season and had a great game tonight on a big stage and is now going to Auburn next week,” he said.

Credit also went to the AHS coaching staff and the many fans who followed the team to the Cramton Bowl Friday night.

“We have a fantastic group of football coaches, but they are even better men. They do everything with love. We are blessed to have what we have at Andalusia, and I’m not talking about our turf field and those type things. To have the type of men with character leading our students is unbelievable,” he said.

“We also have great fans. I’ve been to seven or eight games at the Cramton Bowl where the visitors didn’t have the kind of crowd we had tonight. It was tremendous.”

The Knights took the initial lead of the game on its first possession when, on third and eight, Caleb McCreary connected with Luke Harkless who outran the defense for a 61-yard touchdown.

Andalusia took the kick off and began its first possession on their own 40-yard line. Dorean Crittenden ran the ball for seven yards on the first play. Two plays later, facing a third-and-one, Crittenden got the call again, picking up the first down and more. Quarterback Jack Lathrop hit Kaden Denson on first down for a gain of 11 yards. Crittenden then took a handoff for six yards. On third-and-four, at the Knight’s 36, Crittenden went ahead for about one yard, setting up a fourth-and-three, from where Andalusia chose to punt, which led to the Knights starting its next drive at their own 12-yard line.

The Knights drove the ball and where back in the red zone at the Bulldog 16, but Tyler Sigers came away with an interception to end the threat and give Andalusia the ball.

The Bulldogs connected on a 28-yard gain on a completion from Lathrop to Tycamren Jackson. A few plays later, Lathrop found Jackson again for 12 yards and another first down to the Knight’s 48-yard line as time elapsed on the first quarter.

Crittenden picked up six yards on the first play of the second quarter and followed that with another six yard gain to the 36-yard line. On third-and-seven from the Knights’ 36, Lathrop connected with Jackson who took the ball to the 8-yard line. From there, Crittenden picked up five yards to the 3-yard line and then took it to the 1-yard line on the next play. On third-and-goal from the one, Lathrop got the call on a quarterback sneak to complete the 89-yard drive for the score. Cobb Stewart’s extra point tied the game at 7-7 with 9:02 remaining in the first half.

On the third play of the drive, a Montgomery Catholic ball carrier put the ball on the ground as senior Bulldog Garrett Blackston came away with the recovery at the Knights’ 36.

After a setback for a personal foul penalty, the Bulldogs faced second-and-21 from their own 42. An interference call would give the Bulldogs a first down across midfield and a few plays later, a personal foul penalty set Andalusia up at the 16-yard line. Crittenden then found a big opening set up by the offensive line and took it all the way for the go-ahead touchdown as Stewart’s extra point made the score 14-7.

The Knights began their next drive at their own 28, but quickly found their way into the end zone a few plays later on a 37-yard run by Jeremiah Cobb. The extra point was no good as Andalusia held on to a 1-point edge, 14-13.

Andalusia took possession at the 20-yard line after the kickoff. Crittenden got things going with a 3-yard gain followed by an 8-yard pick up on a completion to Gabe Russo. A few plays later, a Lathrop pass was intercepted and returned to the Bulldog 22.

Jeremiah Cobb carried the ball on the first play all the way to the 1-yard line and he finished the drive on the next play, giving the Knights a 19-14 lead. The Bulldog defense held the Knights on a two-point conversion attempt.

On the kickoff, Kal Crittenden brought the ball out to the Bulldog 40-yard line. On second down, D. Crittenden picked up about 6 and on a third-and-four play, Lathrop found Cedric Sinkfield for the first down. After another six-yard gain by Crittenden, Lathrop completed a pass to Connor Dalton for 11 yards to the Knights’ 36. Another pass play was completed on first down as Lathrop connected with Jackson for a 9-yard gain. Crittenden followed with a 4-yard run for the first down. With the time clock ticking down on the first half, consecutive incomplete passes set up a third-and 10 from the Knights’ 23 with only 21 seconds to go. A 5-yard penalty went against the Knights and the Bulldogs followed that going to the air as Lathrop connected with Jackson for an 18-yard touchdown. AHS coaches called for the 2-point, which went to Crittenden who drove the ball through the line and into the end zone, making the score 22-19 at the half.

Both teams exchanged possessions to begin the second half.

On their second possession, Crittenden helped lead the Bulldogs to the Knights’ 22. A defensive block penalty set Andalusia up at the 8-yard line and Crittenden finished it off with a run into the end zone, increasing the Bulldogs lead to 29-19 after the extra point by Cobb Stewart.

The Knights were trying to get something going and with 3:54 to go in the third, a face mask penalty against the Bulldogs helped move the Knights closer to the end zone. The defense held on the first two plays and a good play in the secondary brought up fourth down. The Knights’ 24-yard field goal attempt went left, as Andalusia preserved its 10-point lead as the game entered the fourth quarter.

Andalusia would continue to feed Crittenden who kept picking up chunks of yardage, but ultimately the drive stalled.

With over 5 minutes remaining, the Knights took possession at the 20-yard line. A 17-yard pass brought the ball to the 36 and that was followed by a 9-yard pick up. A pass interference call helped the Knights as they moved to the Bulldog 34 and that was followed by a pass across the middle for a 17-yard pick up to the Bulldog 17. On third-and-four, McCreary found Harkless in the endzone for the Knights’ first points of the second half as they cut the Bulldogs’ lead to 29-26 with 4:03 to go in the game.

After a few short gains, Andalusia faced a third-and-four with 1:33 to go. A short pass picked up only one yard bringing up a fourth-and-3 at the Kinghts’ 43. The Bulldogs went for it but the run was stopped short of the first down as Catholic took control from there.

The Knights began its chance to come back with consecutive incomplete passes, including a nice defensive play by Andalusia’s Kaden Denson who knocked the ball away from a would-be receiver down the sideline. On fourth down, the Bulldog defense got pressure on the Catholic quarterback, leading to an incompletion and the possession changed to Andalusia with less than a minute to go.

From there, the Bulldogs went into victory formation to close out the 29-26 victory and securing a spot in the 4A state championship game.