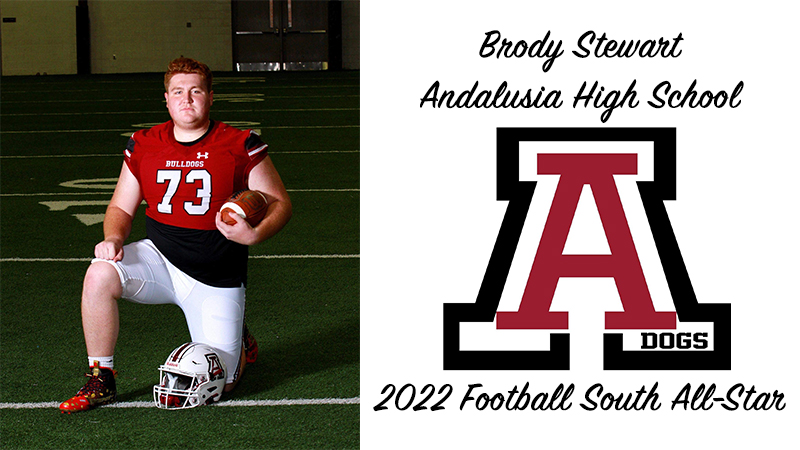 The game will be held at Hancock-Whitney Stadium on the campus of the University of South Alabama.

“The opportunity of playing in this game means a lot to me. It means the hard work and dedication I put into this game is becoming more noticed, and I couldn’t be more thankful. I am extremely grateful and proud to play for Andalusia because of the great teammates and even better coaching. The coaches are the main reason why I’m where at,” Stewart said.

He was notified of his selection through a letter given to him by principal Ray Wilson. He is hopeful that the experience will give more college coaches a chance to look at him and potentially make additional offers.

Stewart, who will be an offensive lineman on the South team, said his favorite part of the sport is the physicality it requires. “In my opinion, it teaches me how to toughen up and become a man early in my life. Football is also my happy place. It is a big part of me.”

He first began playing football around the age of eight or nine.

“I loved watching football when I was young and still do to this day. When I was watching an NFL game, I looked at my dad and said, ‘That’s where I want to be one day.’ He told me, ‘Through hard work and dedication, it’s achievable.’ That’s what sparked my love for the game,” he said.

Stewart expressed gratitude to his loved ones and others who have been there for him over the years.

“Support is everything every athlete needs in his or her life. Thankfully, I have the greatest support from the greatest family. The support they give me is the reason I don’t give up in games or in life. They’re my fuel, and I couldn’t thank them more for having my back no matter what. I am extremely thankful for this opportunity and for everyone that has supported me throughout my whole life. If it weren’t for them, football would just be another sport. I thank them for everything I’ve accomplished so far.”

He is the son of Derrick and Candace Stewart and grandson of Unita Gillespie with three siblings: Bryce, Brinnley, and Brayden.

“Brody has been a really tremendous team player for us and embraced the team concept. Whoever gets him at the next level is not only getting a good football player but a young man of character. He has worked tremendously hard and improved every day. The gains he has made in the weight room and watching him grow up are very gratifying. We have several young men very deserving to be picked, but I don’t know that we could have had anybody better to represent Andalusia than Brody. We’re very proud of him and know he will be successful in the future,” Head Coach Trent Taylor said.