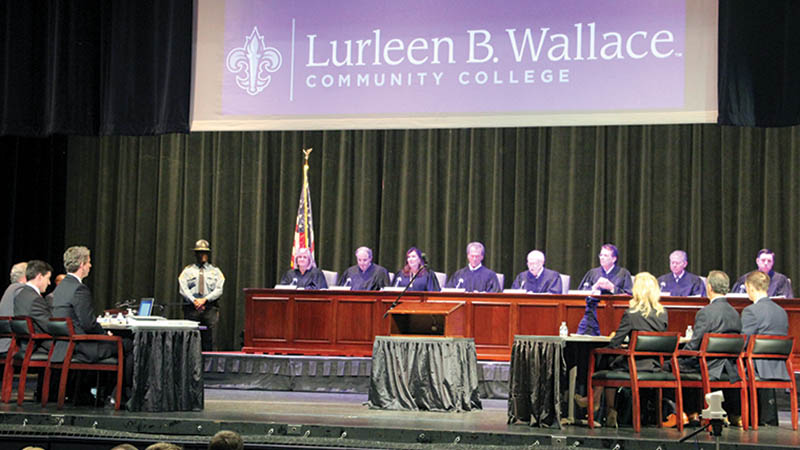 The Alabama Supreme Court prepares to hear oral arguments during a hearing held on the campus of LBW Community College in September. The court has now granted a retrial in the free speech case involving the University of Alabama in Huntsville. (FILE PHOTO)

The Alabama Supreme Court has reached its decision on a freedom of speech case heard during a special session on the campus of LBW Community College in September.

The case heard involved Young Americans for Liberty at the University of Alabama in Huntsville who claim rules established by the university regarding outdoor speech on campus violate the Alabama Campus Free Speech Act and the right to free speech guaranteed by the Alabama Constitution.

In question was whether UAH’s policy of creating “free speech zones” will actually limit protected speech.

In its decision, the court reversed a lower court’s dismissal of a student’s lawsuit claiming that the University of Alabama in Huntsville’s free speech zones violated his rights under the Alabama Campus Free Speech Act. At question was a policy requiring students to submit a detailed application in advance of speaking in outdoor areas of the university, or keep their speech within the boundaries of specific areas of the campus, which were described in the suit as being on the “peripheries of campus.”

The case now goes back to be fully argued at the local circuit level, where justices predicted the student will “at least partially prevail” in his case against the school’s policy which the justices also wrote “plainly violates” state law.

Previously, a jury found in favor of the university during a trial in Madison County. The plaintiffs then appealed to the Alabama Supreme Court with the goal of receiving a judgment for a new trial, based on errors made in the original trial.

The court’s session in September was held leading up to Constitution Day on Sept. 17 with an audience that included students from the college and area high schools.

Prior to the oral arguments hearing on the LBW campus, Alabama Chief Justice Tom Parker said the state’s high court holds special sessions outside of Montgomery each year, adding that typically those are held in larger cities. In the past year, the court has held sessions in Mobile and Huntsville with a planned visit to Birmingham upcoming.