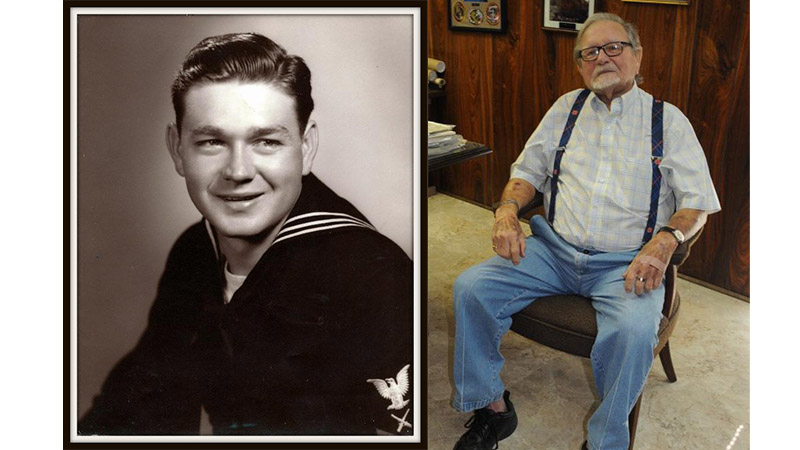 In a 2015 interview, the late Charley Cope talked about his service in the Navy during WW II, “When I was 15, I got my mother to sign papers saying I was 17, so I could join the Navy. When I was discharged in 1946, I was 17 and legally eligible to join the Navy.” Charles Cope’s attitude about serving his country was not unlike so many others who found a way to join the military despite being under age. 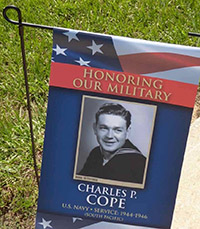 Charles Preston Cope was born October 23, 1928, in Hurtsboro, Russell County, Alabama. His parents were Mary D. and Preston Cope. The family moved to Montgomery and Charles attended Baldwin Junior High School. In 1944, Charles decided to join the Navy and was able to do so with his mother’s help.

After completing basic training at the Great Lakes Naval Base, he was assigned to the USS Graffias [AF-29], a refrigerated supply ship based in San Francisco, California. The Graffias sailed to Honolulu, Hawaii, where it loaded supplies for the fleet. It then sailed to Ulithi in the Caroline Islands, which was the largest anchorage used by the Navy during WW II. The Graffias spent the remainder of the war supplying Navy warships in the Pacific.

In a 2017 interview, Charles Cope remembered when the Graffias pulled alongside the USS Randolph [CV-15] near the end of the war to send over supplies. The Randolph had just been attacked by a Japanese kamikaze and still had a large hole in her aft flight deck [see J. Max Walker article, April 2022, in the Andalusia Star-News]. Charles wanted to remember his friend, the late Jurrell Davis, who served on the Randolph in the 1950s [the author also served aboard the Randolph for several months in late 1962].

Charles was discharged in 1946 and returned to Montgomery. He graduated from Hurt Military School and then enrolled at Alabama Polytechnic Institute [now Auburn University]. After two years, Charles re-enlisted in the Navy and was assigned to the USS Bradford [DD-545], a Navy destroyer. He served aboard Bradford as a Gunners Mate Third Class [GM3] for four years including the Korean War.

After his discharge from the Navy for the second time, Charles entered Auburn again and earned his degree in Agricultural Science in 1956. He married Mary Ann Gray of Auburn, Alabama, in 1955. They moved to Andalusia after his graduation where he took a job with the Farmers Home Administration [FHA]. Charles was given the choice of locations, Dothan or Andalusia, and he chose Andalusia.

Charles served as assistant FHA Administrator to Crawford Holmes for several months before joining Liberty National Insurance in Andalusia. During the 24 years that Charles worked at Liberty National, he made the Torch Club every year. The Torch Club was an honor awarded to agents and managers who led the company in sales and leadership.

Late in his career with Liberty National, Charles was promoted to Vice President of the company. The family moved to Birmingham where they lived for 10 years before Charles retired. During his time as Vice President, his region led the company in sales for eight of those 10 years. After retirement, Charles moved back to Andalusia where he became a founding director of Southern Independent Bank.

The author was privileged to interview Charles Cope in 2017. He was very proud to have served his country. The author thanks Charles’ son, Lucky Cope, for his help in writing this article.