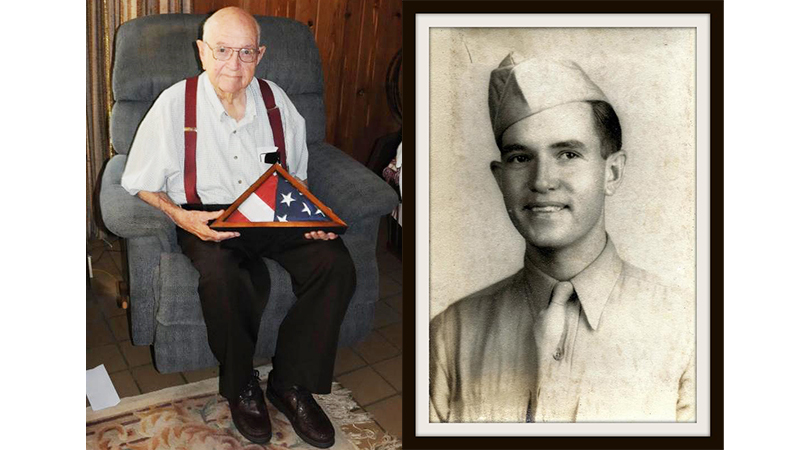 It is an honor and a privilege to write about veterans and more so, when writing about those from The Greatest Generation. Writing about a longtime friend from that group of heroes is very special. The author and the late Sidney Waits were friends for many years. Sidney was a prolific writer about his hometown of Andalusia and Covington County. He was less known for his service in the Army during WW II. 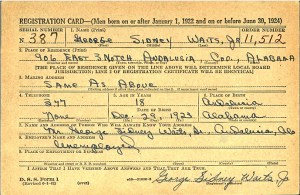 George Sidney Waits, Jr. was born December 29, 1923, in Andalusia, Alabama. His parents were George Sidney and Nannie Bell Waits. Sidney, as he was called, attended Andalusia city schools, and was one of 57 students graduating from Andalusia High School in 1942.

Sidney enrolled at the University of Alabama and joined the Army ROTC unit. On April 6, 1943, Sidney and the entire reserve unit were activated and sent to Camp McPherson, Georgia. After a couple of weeks, Sidney was sent to Fort Benjamin Harrison in Indianapolis, Indiana, for basic training. After completing basic, he was sent to finance school where he learned the job of paymaster. Sidney recalled, “We didn’t have a calculator, just an adding machine and a pencil.” From there he was sent to a replacement unit at Shenango, Pennsylvania.

A couple of weeks later, Sidney and a group of replacement troops were loaded aboard a train and sent to New Orleans, Louisiana. After their arrival in New Orleans, they were placed in barracks at the sugar wharf in Chalmette Parish. They remained there for six weeks before being put aboard a troop ship bound for Guantanamo Bay, Cuba. Sidney remembered that the ship was a converted Dutch freighter and “a pile of junk.”

They were in Guantanamo Bay for only a short time but Sidney recalled a funny incident, “There were a group of Cuban kids that swam out to our ship. They wanted us to throw coins in the water for them to retrieve. We threw nickels and dimes but if you threw a penny, they’d let it go to the bottom.”

In Cuba, Sidney’s ship was joined by three Navy LSTs [landing ship tank] before leaving for Panama. After a rough passage, they arrived at Balboa, Panama, and moored at Pier 18. Sidney recalled. “The Red Cross had a tent at the pier and were ‘selling’ coffee and donuts…that got to me.”

Sidney had to cross the canal at Miraflores to get to his duty station at Fort Kobbe, which was a joint base at Fort Howard with an Army Air Corps Base. The airplanes at the base were there to defend the canal in case of an attack. Over much of the canal, the Army had placed barrage balloons, large, un-crewed airships, anchored with heavy steel cables. They were meant to deter aircraft. There were smudge pots along the canal that created a deep black smoke that was meant to hide the canal from enemy aircraft. Sidney remembered, “Sometimes you couldn’t see your hands in front of your face.” At the western entrance to the canal were four, fixed-in-place, 16-inch guns.

Sidney Waits spent 27 months at Fort Kobbe. His office was located at the finance section of the headquarters building. He did clerical work most of the time but the once-a-month payroll time was hectic. He recalled, “The closest I ever came to combat duty was standing guard duty at the fuel depot.”

Fort Kobbe was located in the “duty-free” zone in Panama. Many of the soldiers bought things at the duty-free stores to ship back home. Sidney did the same but many of his friends sent him money to buy things to be shipped to them. Sidney remembered that the most popular items were Mido watches.

In November 1944, Sidney was surprised to find out that he was eligible for leave. His entrance into the Army dated back to 1942 when he had joined the reserve unit in Tuscaloosa. Thrilled to get leave so early, Sidney decided to fly home for a visit. He recalled, “I flew from Panama on a twin-engine Pan Am plane that carried 21 passengers…There were several stops along the way including Guatemala City. They served us a meal which I was eating from a tray when the plane encountered severe turbulence. The coffee wet my pants leg and the creamed English peas hit the ceiling where they stuck. Pieces of the English peas kept falling all the way to Guatemala City.”

They changed planes in Mexico. Their new flight had departed from New Orleans and the arriving passengers were wearing heavy clothing. Sidney and the other Army men couldn’t get to their jackets and heavy clothing because it was in the cargo hold. It was freezing in New Orleans when they arrived. They were taken to the Jackson barracks to await another plane the next day. Sidney remembered that night, “We left Panama in light clothing and when we arrived in New Orleans, it was freezing. There was no heat in the barracks so we broke into the kitchen and removed enough wood shelving to get a fire going in the pot-bellied stove.”

Sidney had a 10-day pass to come home, but his father died while he was in Andalusia. Sidney remembered, “While I was home, my father passed away. I was able to get an extension and was able to visit with my family and I got to see Polly, who was home from college.”

After the war was over, Sidney was sent by freighter to New Orleans. After arrival, he was sent to Camp Shelby, Mississippi. His commanding office was a Major who asked Sidney if he would like to remain in the Army. Sidney replied, “Do I have an option?” The Major assured Sidney that he had a choice. Sidney told the Major, “I want to get out.”

Sidney returned to Andalusia and managed Andalusia Oil Company that had been started by his father. On June 20, 1947, Sidney married Polly Wilder of Andalusia. They had two children, Mary Evelyn [Smith] and George Sidney III.

Through the years, Sidney was determined to learn all he could about his hometown and county. By most counts, he wrote some 12 books and many pamphlets about the area. He was instrumental in establishing the Three Notch Museum which opened to the public in May 1988. He helped organize and display the contents and was a volunteer at the museum. He was also able to secure the caboose that sits on the tracks behind the museum. He was in contact with many people from the county who lived out of town and was able to secure many artifacts for the museum.

Sidney Waits served as President of the Andalusia Rotary Club and the Andalusia Chamber of Commerce. He was involved in many more civic endeavors but was most active in the Covington Historical Society. Through the years 1991-2007, he wrote the “Three Notch Museum Newsletter,” and later “Along the Three Notch.” In 1995, Sidney and Polly compiled an index to the Magnolia Cemetery located in downtown Andalusia.

The round, brown “Three Notch Trail” signs along East Three Notch Street and South Three Notch Street were put there through the efforts of Sidney Waits. He was also responsible for getting the Conecuh River bridge in River Falls named for the late E. L. Moore, the founder of the Horse Shoe Lumber Company. Sidney was also responsible for getting two historic Montezuma markers erected in River Falls.

Stories that were told by Sidney were most interesting because he was a consummate storyteller. The author is just one of many people who was blessed to enjoy Sidney’s stories. Polly would always listen and add her anecdotes to his stories.

For many years, Sidney played the part of Santa Claus at Christmas time for the community. His daughter, Mary Evelyn Smith recalled, “Daddy played the part of Santa Claus for many years…Mother would take George and me over to Aunt Sara’s [Sara Hair, Sidney’s sister] to get us out of the house so Daddy could put on his Santa suit. Daddy would drive to the airport in Sanford and his good friend, Jimmy Utsey, would take off and fly somewhere before coming back to land…We were at Aunt Sara’s on one particular day, when I was about seven and George was about five, we saw Santa drive by in my daddy’s car. Several of us saw it but it never occurred to us that it was Daddy…There would be lots of families waiting at the airport to met Santa who would then ride into town on a firetruck to meet more families…Years later, when I was in high school, my friend Diane Southwell Williams and I would fly with Daddy and Mr. Utsey and play the part of elves. Those were fun days.”

Sidney died on December 11, 2018, at the age of 94. His funeral was held at Foreman’s Funeral Home Chapel and he was buried at Magnolia Cemetery. He was survived by his daughter, Mary Evelyn Waits [Mac] Smith; his son, George Sidney [Jean] Waits III; his sister-in-law, Evelyn Wilder Anderson; 10 grandchildren and six great-grandchildren.

The author thanks Sue Wilson and Mary Evelyn Waits Smith for their help in writing this story. Thanks also to Robert Evers for the video interview with Sidney that was done in 2010. More than anything else, Sidney Waits was a preserver of our local history, a true southern gentleman who left his mark all around our community. Sidney and Polly Waits were friends to the author and his wife for many years.