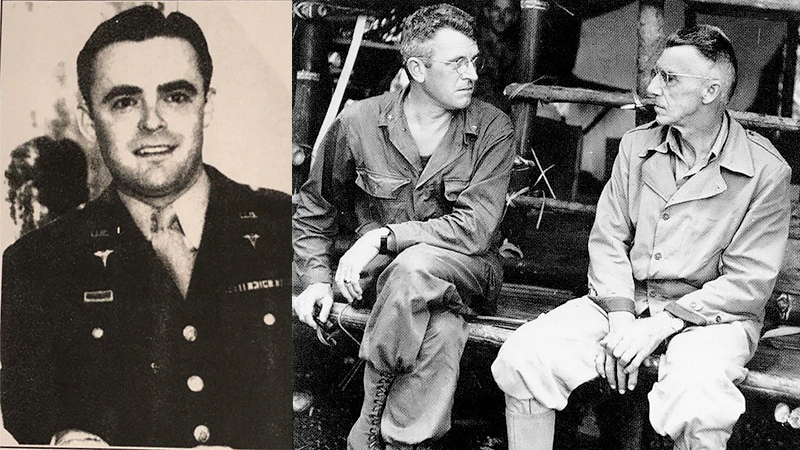 It was not long after completing medical school and internship at Charity Hospital in New Orleans, that Dr. Gary Cumbie joined the U.S. Army Medical Corps and was sworn in as a First Lieutenant on July 3, 1943. He was sent to Camp Barkeley, Texas, for training. He wrote his mother on July 4, 1943, “Please excuse the writing as I’m sitting on the side of the bed and using an apple box for a table. There’s not room for a desk as there are five fellows in here…We bathe, shave and eat at another place…All in all, we have a pretty good set-up…several fellows from Charity are here.”

Camp Barkeley was the first stop for Cumbie that included assignments to Camp Polk, Louisiana; Fort Lewis, Washington; and Fort Meade, Maryland. From Fort Meade, Cumbie was sent half-way around the world to Burma, where he joined the 5307th Composite Unit [Provisional]. The unit was composed of volunteers, some of whom were veterans of the Pacific campaigns at Guadalcanal and New Guinea. Others came from garrisons in the Panama Canal Zone, the Caribbean and the remainder came from Army correctional facilities. They were given jungle training and sent to the China-Burma-India [CBI] theater of operations to fight against the Japanese. The 5307th became the first special forces unit in the U.S. Army.

Eventually there were three battalions that made up the 5307th, called the Galahad Force.  Some journalist nicknamed the unit, “Merrill’s Marauders,” after the unit’s commanding officer, Brigadier General Frank Merrill. The Marauders were sent on an 800-mile trek, through the jungles of Burma, to divert Japanese forces from General Joe Stillwell’s Chinese/American forces fighting in China. Their goal was to capture the Japanese-held airfield at Myitkyina.

The Marauders used pack-mules to haul supplies and equipment over the most inhospitable jungle and mountainous terrain imaginable. After four months of fighting the Japanese in the leech-infested tropical jungles of Burma, they were able to take Myitkyina and its airbase. The original force of some 2,750 men had been reduced to about 200 men who were still able to fight. Some 272 men had been killed by the Japanese and 955 had been wounded. Nearly 1,000 men had been evacuated for disease such as malaria, amoebic dysentery and other tropical diseases.

William Gary Cumbie was born August 6, 1916, in Morris, Georgia. His parents were Emma Gary and James Lewis Cumbie. An older sibling, James Lewis Cumbie, Jr., died a few months before the death of his father in 1928. Following the death of her husband, Mrs. Cumbie moved the family to Troy, Alabama, where she took a job at the Baptist Children’s Home. Gary’s younger brother, Frank, age 13, died in an accident sometime after the move to Troy.

Gary graduated from Troy High School in 1935 and enrolled at the University of Alabama, where he received his degree in pre-medical studies in 1938. He was admitted to the University of Alabama Medical School which was at that time, only the first two years. After completion, he was inducted into the prestigious Gorgas Society, the highest formal honor for a student in the School of Medicine. He was then admitted to Tulane School of Medicine, where he completed his 3rd and 4th years and received his MD degree in May 1942. In July 1942, he began a one-year internship at Charity Hospital in New Orleans. Midway through his internship, in December 1942, he received a letter from the War Department requesting that “upon completing your internship, please submit your name to the Surgeon General of the United States.” Apparently, all doctors were “volunteering” for service. He completed his internship on June 30, 1943. Three days later, he joined the Army on July 3, 1943.

While still at Fort Lewis, Washington, Cumbie was assigned to the Medical Department Replacement Pool for the 44th Infantry Division. That same group was assigned to Fort Meade, Maryland, prior to their departure for the CBI theater in May 1944. Cumbie was not able to tell his family about his movements until arriving in India. He wrote, “I’m not to tell you where I’ve been, where I am, nor where I’m going.” On the voyage, he wrote his mother, “We’re riding high in the seas and I’ve fed the fish a few times.”

Dr. Gary Cumbie’s letters to his mother and sister, Betty, continued after he arrived in Burma.

On June 1, Cumbie’s unit was sent to Burma. He wrote, “I’m somewhere in Burma… I’ve seen a good many patients and don’t have much spare time.” Again, he wrote on June 19, “I wish the folks back home could see and appreciate just what our boys are doing on the front lines…I’ve had the opportunity to treat every type of wound imaginable.” He wrote again on July 18, “I’ve done more surgeries here in seven days than I did as an intern in six months.”

On June 27, he wrote, “We sleep in foxholes at night. When it rains, the water gets pretty deep. It’s not so bad when the generals are doing the same.” In a letter dated June 30, he wrote, “I’m now attached to a Surgical Portable Hospital and doing lots of surgery…The situation changes rapidly and you never know today, where you may be assigned tomorrow…I spent several hours last night treating an injured Japanese soldier, who to my amazement, seems to be much better this morning….He is the only live Japanese soldier I’ve seen. We treat them just like we treat our own.” He continued, “Some patients are coming in now by ox cart and I must get back to work…We can usually know when to prepare for work when we hear the guns in the distance.”

On August 4, he wrote, “Things are very quiet now as our current mission is about over. In a few days we go back to rest camp. As you probably know, we are the only American ground force in this theater, we being part of ‘Merrill’s Marauders,’ under command of General Stilwell. This is the China-Burma-India theater.”

In his letter dated August 22, he wrote, “I’ve been on special duty away from my unit several times. Believe me, I’ve gotten to do a lot of real medicine…Work is not so hard and there are no ‘fox holes’ in this place. In fact, we are a long way from any enemy. We did have quite a time of it however, in the Battle of Myitkyina which is now over.”

On August 27, he wrote, “Once again, it is Saturday night in ‘dear old Burma,’ the land of jungles. Speaking of jungles, I just saw a couple of fellows preparing for a tiger hunt. There are elephants, tigers, deer, wildcats and most any other type of animal one might dream about. In other words, it’s a hunter’s paradise…It rains practically every day. And cows – they are here by the hundreds but for some reason very sacred and no one dares injure one.”

In his letter dated August 30, Cumbie mentions a medical missionary he had met, “Did I tell you about the medical missionary from the U.S., Col. Seagraves, author of ‘The Burmese Surgeon?’ I worked several days in his hospital. I understand he has been over here some 20 years. I want to get a copy of his book and read it.”

Beginning on October 6, Cumbie’s letters are postmarked from, “Detachment of Patients, 20th General Hospital and the usual Armed Forces postal address. On October 6, Cumbie shared some not so good news, “I mentioned in my last letter that it might be some time before I could write again as I was leaving on a trip that I thought would take me to China. But things didn’t work out so good. On the very first day, I became very ill and was brought back to a field hospital, then flown out the next morning to this general hospital in India. I was fortunate enough to run into an old friend, Captain James Donald [from Pineapple, Alabama], who is a medical officer at the hospital here…James offered to write you for me…. I suppose you’re wondering what’s my trouble – well I’ve got typhus fever. It’s a horrible disease, but if one lives through the first three weeks, he usually recovers. I’m over the danger part now, just very weak.”

On the same day, Dr. James Donald wrote Dr. Cumbie’s mother, “You may have heard Gary mention me in past years. We were very good friends in college. I’m James Donald from Pineapple, Alabama, and am a medical officer in this hospital….Gary came in a week ago with rather high fever and has felt miserable from his disease until the past two days…His disease is rather common in this area…He wanted me to write you because he is still a bit shaky and weak. You may put your mind at ease about him. His fever has subsided and he is definitely recovering now….Believe me, he is practically well now and is in no further danger, although a week ago he was quite ill.”

On October 15, Cumbie wrote his mother, “This is the 25th day of my illness with typhus fever. I’m now much improved but weak as a mouse…Now it’s only a matter of time to recuperate which will no doubt be two or three months.”

In his letter of October 22, Cumbie wrote about his missionary friend, Col. Seagraves, “The war situation in Burma is somewhat better, but there’s more to be done. Seagraves has so many patients that I know he doesn’t do much missionary work. You know he takes care of the Chinese and the natives. I’ve seen as many as 100 patients waiting after dark to be operated upon. Of course, these are war casualties. He works with only a handful of nurses and other help. His hospital consists only of a few tents and sometimes the ground gets knee-deep where he operates. He has to move his hospital around every few weeks because the Japanese locate it from the air and start bombing. Quite a life but he seems to take it the course of a few days work. He looks very tired and worn out but I guess the good Lord gives him strength. [End of Part 1].

[Sources: to be listed under Part 2]